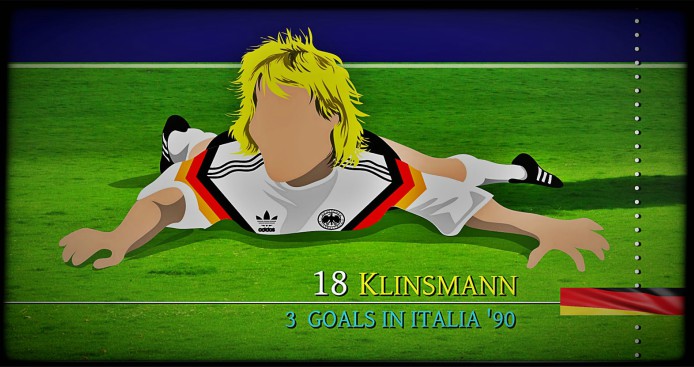 The World Cup is a pretty handy cultural milepost for football. Once every four years is just about right in football’s unique universe to encapsulate the state of the game: tactically, physically, politically, aesthetically, whatever you like. The tournaments never blend into one, because they all have their stand-out iconography; the obvious and non-obvious things that pop into your head whenever a World Cup year is mentioned.

This series aims to explore some the more enduring examples. First up, a shirt. Well, two shirts. Both could be described in such vague and increasingly worthless terms as ‘iconic’ or ‘cult’ – which they are – but there is a depth to their story. Let’s take a moment or two to enjoy them in their considerable glory.

With some stunning outliers (Denmark’s Hummel-designed efforts in 1986, most notably), international football shirts were still very much a straightforward, minimalist affair until the late 1980s. Before a commercial demand took hold, there was a staunch ain’t-broke-don’t-fix-it approach, and (West) Germany’s shirt was no exception: a monochrome monolith, occasionally daring to tweak the collar, but otherwise consistent.

The first perceptible glimpse of colour, after 80 years of zero fuss derived from the flag of 19th-century Prussia, was some subtle piping at Mexico ‘86. Then, perhaps inspired by the European Championship being hosted on home soil in 1988, German giant Adidas came up with something very different. The timing must have felt right, only for Franz Beckenbauer’s side to run into their Dutch friends in the semi-finals. The shirt appeared to be destined to be forever associated with the arse of a delighted Ronald Koeman.

Germany were on a mission at Italia ‘90 right from the very start: a 4-1 win over Yugoslavia. Stojkovic, Savicevic, Prosinecki et al were buried by a brutal brace from Lothar Matthaus – a swipe with the left, an absolute rifle with the right – and then a geometry-defying diving header from Jurgen Klinsmann.

This wasn’t ruthless efficiency, as the cliché still goes, this was authority with a flourish. And they were wearing a kit to match.

Revenge was served cold against Holland in the second round, Klinsmann applying another deft touch and then Andy Brehme curling home a beauty to render Koeman’s late penalty a mere consolation. What happened to his shirt is not documented. As for the German jersey, not even Frank Rijkaard’s sputum could ruin it.

The final, a match described by the great Brian Glanville as ‘probably the worst, most tedious, bad-tempered final in the history of the World Cup’, is best thought of as a means to an end.

But, as Brehme nervelessly tucked home his late winner from the penalty spot, an innocuous-looking pattern had been completed. If you really wanted to over-analyse things (and why not?) you might notice something highly significant about the trajectory of the Schwarz-Rot-Gold ribbon effect.

From winning the World Cup on their own patch against the romantics’ choice of Johan Cruyff’s Holland in 1974, the Germans were dumped out in the second group stage four years later. Two soul-sapping defeats at the final hurdle (the sort of rut any other footballing nation would quite like to find themselves in) followed against Italy in 1982 and Argentina in 1986, before Matthaus lifted the trophy again in 1990.

Perhaps Adidas HQ had something deeper in mind after all.

During the 1988-1991 lifespan of the shirt, Germany never had much call for an alternative. In fact, they were only compelled to wear their change colours four times in those three years, which perhaps explains the adventurous design. A semi-final colour-clash at Italia ‘90 means that the half-century-long tapestry of English World Cup misery and heartbreak will always have a slight jade-ish tint.

Based on the very same design that made Holland’s triumphant Euro ’88 shirt such an enduring collector’s item, this version of Germany’s shimmering away shirt was worn just once: that night in Turin. Has an elite-level football shirt ever been worn so little and yet remembered so vividly?

But wait. There’s a third part to this tale of 100% polyester. One that combines the best of both of these famous shirts, with an extra layer of mystery on top.

At a glance, this would seem like a more natural away design, adhering to that faithful formula of not fixing what wasn’t broken with the home shirt, and just changing the colour. The white version would become part of nostalgic World Cup furniture; this green option was, for some reason, not introduced until 1991. When it was worn precisely once. Against England.

#throwbackthursday : Happy birthday to @garylineker – see you in #moscow 🇷🇺👍

Unlike the copy-and-paste approach of today’s mass-market kits (which is a shame, given the obvious appetite for original designs) this was an Adidas template used sparingly elsewhere – an excruciatingly rare Boca Juniors away shirt here, a slightly less glamorous Cork City home shirt there – which surely adds to its mystique.

Cork City had it, with the stripes a bit thinner to allow for sponsor. Boca Juniors also used it on a change kit pic.twitter.com/5T7dhVlqmo

After nearly 30 years of internet listicles and extortionate eBay listings, football kit culture has finally welcomed this design classic back into the fold. Adidas has single-handedly kicked off an emphatically retro-facing trend for next summer’s World Cup: Russia, Belgium and Colombia will all pay homage to the late 1980s and early 1990s.

In that spirit, Germany’s effort is something of a disappointing rehash – the ribbon effect is back, streaking across the chest, but someone decided that the black, red and gold combination of the Bundesflagge wasn’t necessary. Prussian monochrome is back, securing the original’s cult legacy for a few more years at least.