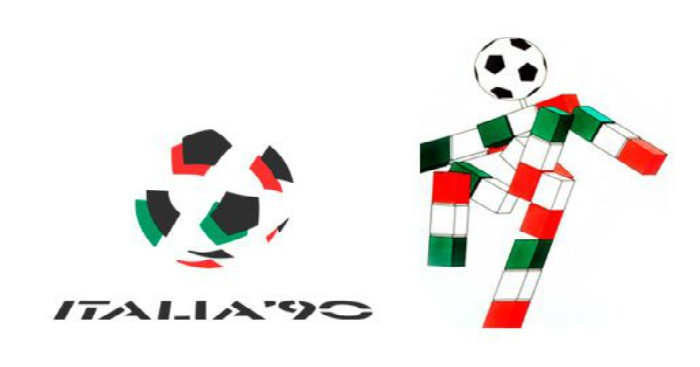 Ever since World Cup Willie, the brazenly bipedal lion of 1966, organisers of the world’s biggest sporting event have had a clear formula for their mascots. In particular, the World Cups of the 1970s and 80s developed a preoccupation with either chubby-cheeked young boys or anthropomorphic fruit. Without wishing to desecrate the memory of Gauchito (a boy gleefully wielding a whip) or Naranjito (a happy, juicy Sevillian orange), the turn of a new decade was a good time to try something different, and perhaps explore other cultural avenues than simply childhood obesity or salad ingredients.

From that opportunity came the figure recently decided – in a thoroughly democratic process – to be the greatest World Cup mascot ever conceived: Ciao.

That conception took more than four years. In October 1985, eighteen months after being awarded the tournament, the Italia ‘90 organising committee (COL) announced a competition to design the World Cup mascot. 50,000 entries were received, including one from a self-taught graphic designer by the name of Lucio Boscardin.

“I came up with the idea in front of a traffic light,” Boscardin says. “It made me understand that the Italian flag was an element to be valued. I made some simple sketches in my car right there and, in my study, I broke the word ‘ITALIA’ into ten tricolor sticks so that they would become an athlete.”

“Only the head was missing and, inevitably, I put a ball.”

With such overwhelming competition – and a stellar panel of judges which included the legendary car designer Sergio Pininfarina – such a simple-looking concept, and such a departure from the cartoonish mascots of previous tournament, was risky. But Boscardin insists that Ciao, from the outset, ticked all the committee’s boxes.

“Based on the restrictions imposed by the regulations – namely, that it was not necessary to use regional characteristics, monuments, characters or foods – I think that the originality of my all-Italian mascot had a good chance of being chosen.”

A stick-figure with a generic football for a head – no precocious grin, no rosy cheeks, no silly hat – might have posed a problem for the merchandisers at first, but it proved to be a welcome change from the other attempts to capture the essence of the host nation. ‘Being abstract and detached from historical references,’ Italian writer Michele Galluzzo wrote in 2016, ‘[stood Ciao out from] the nearly fifty thousand proposals received, most often marked by icons of regional gastronomy or imperial splendor.’

Aside from avoiding twee snapshots of Italian architecture or cuisine, Boscardin’s design embraced the idea that – shock horror – grown-ups could enjoy mascots too. ‘Ciao is a figure for adults,’ Vice Italia’s Toni Zugna wrote in 2014. ‘Cold, stiff, angular, inexpressive.’

The soft-toy manufacturers’ loss was Boscardin’s gain. More than a year after submitting his entry, he was visited in his office by two members of the organising committee. Boscardin, elated, had to keep the news quiet for another six months before the unveiling at the Palazzo del Quirinale in Rome in November 1986.

“The feeling was great,” Boscardin recalls of the moment the curtain was dropped to reveal a three-metre-high model of his creation, which was something of a redemptive chapter in his life. “Sooner or later it had to happen because as a boy I felt I was a winner. I knew I had qualities since I won the provincial cycling championship in Vicenza. I did not continue, though, because my racing bike was stolen in Milan.”

So, Ciao was born – but, for three years, it didn’t have a name at all. ‘Ciao’ was settled upon after a vote conducted via Totocalcio – the Italian football pools – beating the other nominations of Amico, Beniamino and (thankfully, in hindsight) Bimbo and Dribbly.

Ciao was a gender-neutral slow-burner of a success, though. Italy’s all-time top goalscorer Luigi Riva, for one, was a not a fan. “Riva was with me on the bus from the Quirinale that took us back to the hotel for the award ceremony and, with all frankness, he told me that he didn’t like it. I asked him to be patient.”

Designing the mascot for one of the most memorable World Cups was presumably a profitable commission, though? “The first prize was 60 million lire, minus tax [equivalent to about £25,000 at the time]. I spent a lot of it to buy the first Apple computer in 1988.”

Soon enough, with COL retaining its lucrative copyright (“I would have done it for free, I did not do it for the money,” Boscardin insisted in 2014), Ciao was to be found everywhere, from T-shirts to mini footballs to…limited-edition convertible Fiat Pandas.

I put it to Lucio that Ciao has become a footballing cultural icon far beyond the borders of he country it was designed to characterise. Why does he think Ciao is still so widely loved 28 years later?

“I am pleased that in England and beyond it is a cultural icon – after all it represents the nation in which the World Cup was held but not only that, the dynamism it contains is a sign of the industrious Italian people.”

Beyond sheer nostalgia, Ciao’s legacy is unclear. USA ‘94, as most might have expected of a tournament opened by Diana Ross missing a penalty, opted not to pursue the same obscure angle for its mascot: Striker, a Warner Brothers-designed canine, was chosen (in the witheringly matter-of-fact words of Wikipedia) ‘because dogs are a common pet in the United States’ and had to be redesigned because it was running with the ball tucked under its arm.

France ‘98 went for a cartoon cockerel, South Korea and Japan presented us with three lovable aliens in 2002, and we’ve had a lion, a leopard and an armadillo in the intervening years before a million Russians voted for ‘Zabivaka’, a wolf who wears safety goggles. As for Ciao – 33 years on from the day its creator hurriedly took out sketchbook at the steering wheel – you fear our hero may have fallen on hard times…

…or been stripped for parts a long time ago, perhaps to be used for Channel 4’s pre-Gazzetta ident:

Now 75, Boscardin is ready to hang up his drawing board, after the completion of “my last job, the most beautiful and important”, an exhibition based on another Italian folk hero, Pinocchio. Perhaps the inspiration for Ciao, the greatest World Cup mascot of all, was more than just about a traffic light after all.