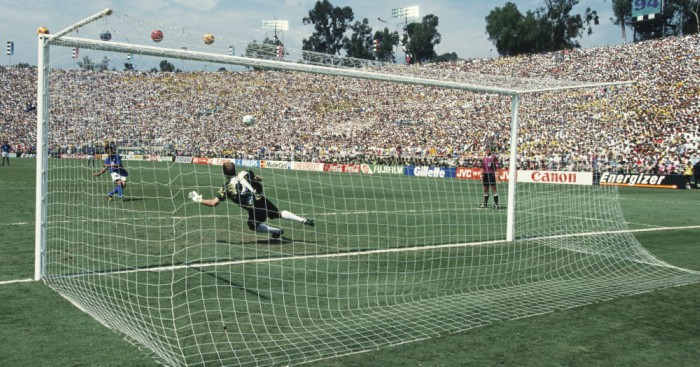 The hindsight of football nostalgia certainly isn’t always 20/20. Among the vague claims that it was better in the old days, though, is a suspicion that the rampant slickness of the modern game has made everything a bit homogenous. Tricky trips to eastern Europe are no longer so tricky, the potential banana skins of FA Cup away days now take place on pitches just as well-manicured as the Premier League’s and almost every new stadium looks largely the same.

The World Cup – which reliably serves as a quadrennial snapshot of the current state of football – doesn’t appear to be immune from that either. As a risky hypothesis: the tournaments of 2006-2018 are almost interchangeable in terms of how they’ll look on television and in photos, but the same surely couldn’t be said, for example, of 1978-1990.

World Cup nostalgia demands that a tournament – aside from the actual football, obviously – features at least one unique visual element. The shimmering Mexico ‘86 is notable as the last World Cup without a single game played under floodlights, Italia ‘90 was blessed with the greatest TV graphics ever seen (and THAT Germany shirt), and the memory of Argentina ‘78 will forever be littered with ticker tape.

Right off the bat, USA ‘94 was framed as the World Cup of excess. The draw for the finals – held in Las Vegas, naturally – featured Robin Williams gently taking the piss out of Sepp ‘Bladder’, cameo appearances from Rod Stewart and Stevie Wonder, and a performance of ‘Livin’ in America’ (Rocky IV’s anthem to capitalism) by James Brown.

Months later, when the circus was finally ready to open, it was left to none other than Diana Ross to kick the first ball of one of the least shot-shy World Cups of all time.

As Ross strutted down the middle of Soldier Field in Chicago – through a sea of schoolgirls dressed, for some reason, as satellite dishes – the watching millions (and a hyperactive goalkeeper, who I would dearly love to track down one day) awaited the first bulging of a goalnet at USA ‘94. The organisers presumably offered the simple instruction of “just put your boot through it” or similar, only for Ross to opt for a stuttering run-up (never one for the novice) and then a sidefoot into the corner. This failed, obviously, leaving the poor volunteers to drag the goal apart at the seams for an even more inexplicable reason.

Anyway, as Ross happily trotted onwards to the stage, we’d been given a glimpse of one of the undersung heroes of the 1994 World Cup: the goalnets.

There may be some of you who don’t think the variation in goalnets is important, and probably some of you who don’t think about it at all, but most of you should be familiar with the absolute nadir in the history of the onion bag – namely The Dell, Southampton. God rest its humble, intimate, asymmetrical soul, but surely nobody misses the ball pinging back out of its painfully shallow goals. The entirety of Matt Le Tissier’s career, it turns out, was dedicated to the quest of finding a way to score a goal that didn’t make the ball rebound unsatisfyingly back on to the pitch.

The best goals are emphatic goals, and emphatic goals deserve the emphatic embrace of a maximally-bulging goalnet. Where better than a World Cup – a stage intended to live long in the memory – to have decadent netting that accepted every thunderbolt and bullet header into its nylon infinitude?

The cavernous, billowing luxury of USA ‘94 goalnets were entirely appropriate. It was a tournament of record attendances (no World Cup has attracted more people to watch it), roasting temperatures (Jack Charlton’s family-holiday baseball cap is a design classic on its own) and – most importantly of all – goals aplenty.

With an average of 2.71 goals a game, it remains the most prolific World Cup since 1982, but it certainly wasn’t a case of quantity muscling out quality. For every impertinent Romario toe-poke, there was a Saudi slalom; for every perfectly-crafted Romanian counter-attack, there was a brutal hammering from the edge of the box.

The beauty of the USA ‘94 goalnets was in the detail; or rather the lack of it. Instead of the heavy-duty goalframes of the 1950s and 60s (which included the occasional square goalpost, eventually banned by FIFA in 1987) there was barely anything in the form of stanchion to keep the net taut and box-shaped. 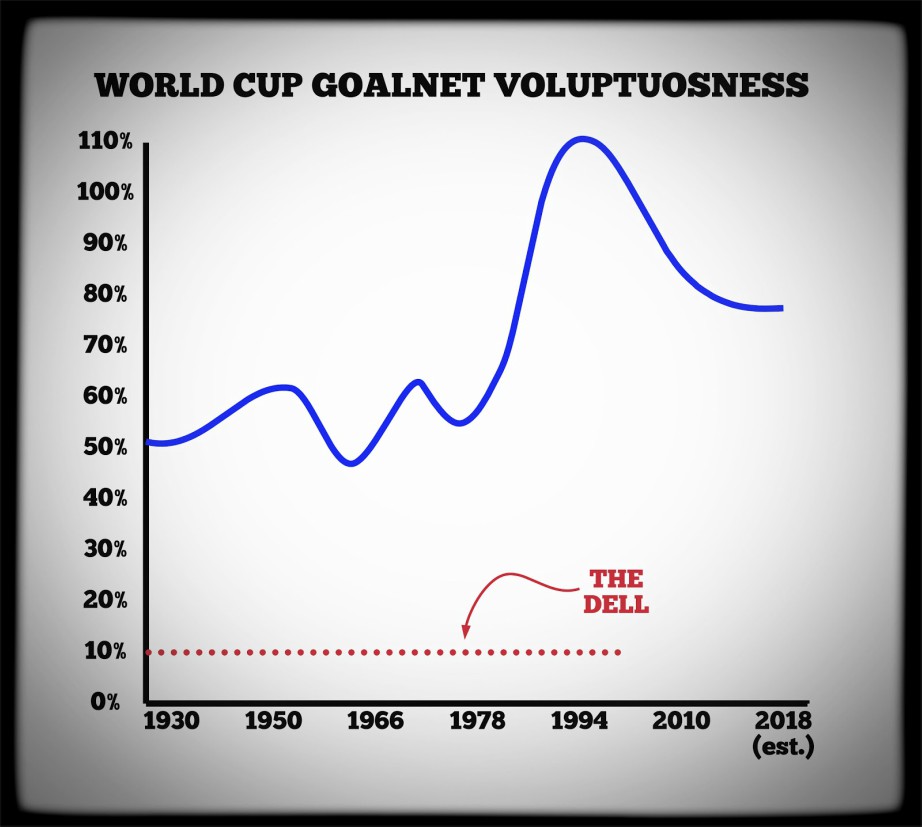 This meant that 1) the goalnets looked more like giant lace curtains and 2) it only took the weight of one Mexican midfielder to bring the whole thing crashing down and demonstrate that, once something was propelled into that goalnet, it wasn’t coming back out very easily.

While Hristo Stoichkov, Oleg Salenko (who made hay with five goals against Cameroon) and Romario enjoyed most of the goalscoring spoils, it was perhaps Gheorghe Hagi who performed the most thorough all-angles examination of the goalnets’ voluptousness, delivering the Adidas Tango to its spiritual home from almost wherever he liked.

And, even though the tournament ended just as it started – with a superstar performer failing to make the net bulge from a spot-kick – the cult, inanimate hero of USA ‘94 would still enjoy its iconic moment in partnership with the late, great Rashidi Yekini.

“As a footballer we at times get carried away by our emotion or passion and that was what happened when he scored that goal,” Yekini’s roommate Thompson Oliha later said of the scorer of Nigeria’s first-ever World Cup goal. “I think he was saying something like ‘It is me! It is me!’”

“Yes, it was a goal with a touch of teamwork, but the man just celebrated the best way he thought.”

The humble goalnet: rippling symbol of triumph, vehicle for unadulterated joy, home of World Cup-worthy goalscoring. America, for this, we salute you.