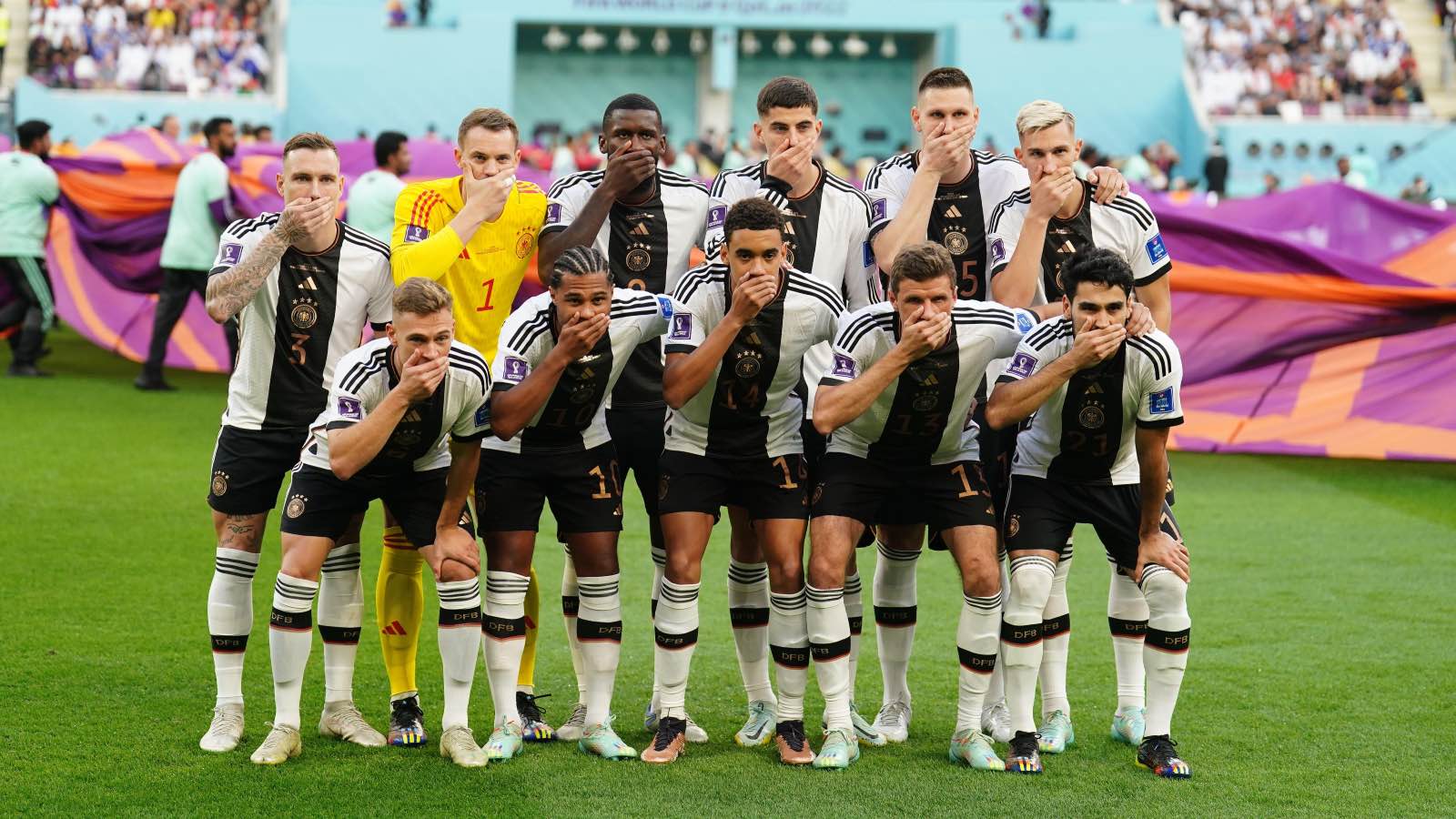 Germany have risked disciplinary action from FIFA after their players covered their mouths during a team photo at the World Cup in a OneLove armband protest.

The move marked another day of tension between the seven European nations who supported the OneLove campaign and FIFA, with the group – which also includes the English and Welsh FAs – exploring their legal options over this matter.

The Football Association declined to comment on whether the England team would copy the German gesture ahead of their match against the United States on Friday.

Speaking about the ‘covered mouths’ gesture after his side’s 2-1 defeat to Japan, Germany coach Hansi Flick said: “It was a sign, a message that we wanted to send out. We wanted to convey the message that FIFA is silencing us.”

Flick was referring to the fact that the OneLove group were threatened by FIFA with sporting sanctions – starting with the issuing of yellow cards to their captains – if the rainbow-coloured armbands were worn.

The OneLove campaign started in September and runs for a year but was set to be especially significant during the World Cup in Qatar, a country where same-sex relationships are criminalised.

The PA news agency understands lawyers for the group are looking at the regulations to examine the sanctions the associations were threatened with. Danish FA chief executive Jakob Jensen confirmed legal options were being explored but said the group could not immediately go to the Court of Arbitration for Sport.

The German gesture could prompt disciplinary action from FIFA under Article 11 of its disciplinary code. It states that anyone “using a sports event for demonstrations of a non-sporting nature” may be sanctioned. FIFA has yet to comment on what the German team did.

A tweet from the German federation read: “We wanted to use our captain’s armband to take a stand for values that we hold in the Germany national team: diversity and mutual respect. Together with other nations, we wanted our voice to be heard.

“It wasn’t about making a political statement – human rights are non-negotiable. That should be taken for granted, but it still isn’t the case. That’s why this message is so important to us. Denying us the armband is the same as denying us a voice. We stand by our position.”

READ LATER: Germany stunned and staring at embarrassment again after falling to Land of the Rising Subs

There is a risk though of the German gesture being an isolated one.

Switzerland are also part of the OneLove group, but their captain Granit Xhaka indicated his team would not stage a similar protest ahead of their opening match against Cameroon on Thursday.

“This gesture has been decided by Germany, but I don’t think that we have to do anything as a Swiss team. We have to just accept the rules and that’s it,” the Arsenal midfielder said.

“We don’t have to discuss it any longer. We have to focus on football now and that’s the only thing I’m going to do.”

England goalkeeper Jordan Pickford was asked about the armbands controversy on Wednesday and said: “As a squad we all had conversations and we all stand for it. We all wanted Harry to wear it, but I think the decision got taken out of our hands as a squad and as players. It went higher up than that really.”

Belgium defender Jan Vertonghen said on Tuesday he felt players were afraid to speak out in Qatar and were being controlled. The Red Devils, who are also part of the OneLove group, kick off their World Cup campaign against Canada on Wednesday night.

Former England striker Ian Wright praised the actions of the German team. He said on ITV1: “I am delighted for them because they have done something, and it is on a global stage.

“It is a global moment for the LGBTQ community to see that people are standing in solidarity with them and that is fantastic. I hope the other teams maybe do the same.”

Former Republic of Ireland captain Roy Keane, though, felt they should have taken their protest further.

“It is a gesture and a start, but they can still do a lot more. To say they (players) have been silenced – but by who?” Keane said on ITV1.

“Use their voice, wear the armband and stand up. It is about action. Go and do it.”

Germany’s on-field gesture was reinforced in the stands at the Khalifa Stadium by interior minister Nancy Faeser wearing a OneLove armband in the VIP box.

Sitting to her right was FIFA president Gianni Infantino, who on the eve of the tournament launched an extraordinary attack on the “hypocrisy” of European nations over their criticism of Qatar on human rights issues.

Discontent among the group towards FIFA is building, with the German federation saying just before the tournament it would not support the re-election of Infantino, who is due to be unopposed in the vote next year, while the Danish FA has taken the same stance.

READ MORE: Who can we support at the World Cup? And what if Harry Kane was gay?