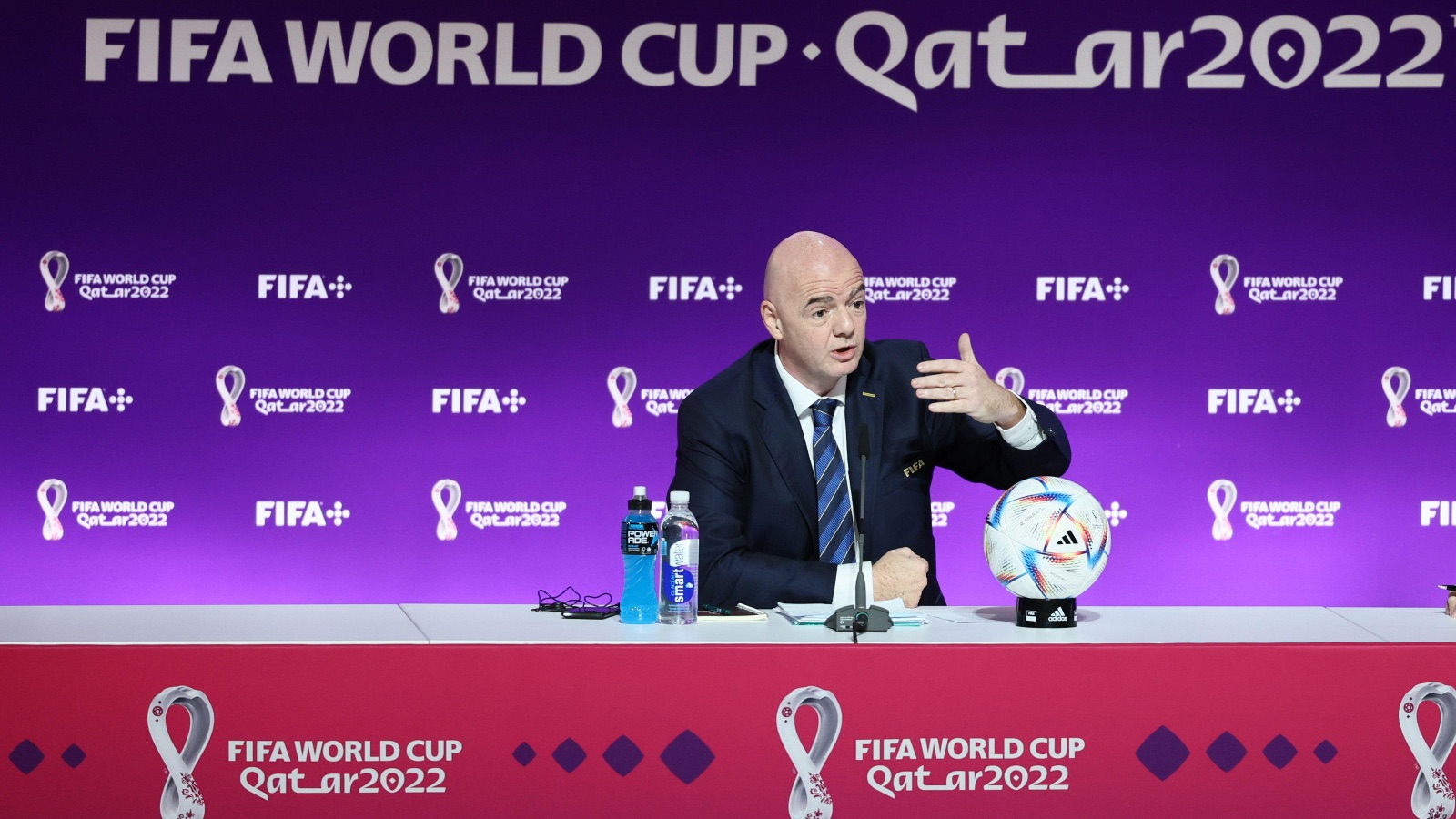 On the eve of the World Cup, Gianni Infantino sat down to ease the concerns of the woke among us who don’t like migrant workers dying or homosexuals being denied their human rights.

But you can pin at least some of the blame on Football365 for this utter clusterf*** of a press conference, as we were in The Room Next Door, a la Michael Spicer. We did our best.

F365: OK Gianni, just remember, you called this press conference to ease the very valid concerns of a lot of people ahead of this mess of a World Cup you’ve got us into. The key is to be empathetic to those who didn’t particularly think your letter telling everyone to “focus on the football” was a wise response to migrant deaths, concerns over fan welfare and the generally embarrassing human rights record of this country that’s lined your pockets. Nice and easy to start. Try and sound like the compassionate leader of an honest organisation.

F365: Weird start. Are you going to claim you feel like people from all nations?

F365: No, OK, sexual orientations now. Just mind how you go, I’m not sure oppressed groups are going to take kindly to this.

F365: Are you reading this? For the love of God don’t start banging your fists on the table.

F365: Gianni, you’re a multi-millionaire sitting in an air-conditioned room while the world watches you garble this nonsense. You’ve never even talked to a migrant worker, let alone know how they feel.

GI: Of course I am not Qatari, I am not an Arab, I am not African, I am not gay, I am not disabled.

GI: Because I know what it means to be discriminated.

GI: To be bullied, as a foreigner in a foreign country.

GI: As a child I was bullied – because I had red hair and freckles, plus I was Italian so imagine.

F365: F***ing hell, I’m not sure it’s wise to equate jibes from 10-year-olds about your hair pigment to the plight of those fighting for the right to love who they want or those people mourning the death of their family members.

GI: What do you do then?

F365: Apologise for what you just said?

GI: You try to engage, make friends. Don’t start accusing, fighting, insulting, you start engaging. And this is what we should be doing.

F365: Engagement, yes. That’s a buzzword. Now talk about how we can use this World Cup to change the archaic views of the country it’s hosted in.

GI: We have been told many, many lessons from some Europeans, from the western world.

F365: Inclusivity, like it. Let’s not make this a western world vs thing though.

GI: I think for what we Europeans have been doing the last 3,000 years we should be apologising for next 3,000 years before starting to give moral lessons to people.

F365: What did I just say? And we talked about morals. You don’t have any, so you aren’t in a position to preach about them.

GI: I have difficulties understanding the criticism.

F365: You have difficulty understanding how eating makes you less hungry.

GI: We have to invest in helping these people, in education and to give them a better future and more hope. We should all educate ourselves, many things are not perfect but reform and change takes time.

GI: This one-sided moral lesson is just hypocrisy. I wonder why no-one recognises the progress made here since 2016.

F365: Because you’re talking about progress in infrastructure while everyone else wants to know why so many people had to die putting that infrastructure in place.

GI: It is not easy to take the critics of a decision that was made 12 years ago.

F365: Right, let’s not pretend that you weren’t fully on board with that decision.

GI: Qatar is ready, it will be the best World Cup ever.

GI: I don’t have to defend Qatar, they can defend themselves.

F365: No you don’t, but fine, let’s move on. How about you respond to the claims that you paid people to be fans of the European nations here in Qatar. Just deny it.

F365: If you’re not organising a war then what was all that dictatorial sh*t earlier?

GI: We organise a World Cup where people with many problems, everyone in his or her life, want to come and enjoy. Look at the city, it’s beautiful. People are happy to celebrate. They were happy when the teams come.

F365: OK yes, let’s talk about the celebratory aspect of this World Cup.

GI: When the teams come what do I read?

GI: ‘These people don’t look like English, they shouldn’t cheer for English, because they look like Indians.’ I mean what is that?

F365: We don’t know, Gianni. It sounds like you’ve just made up something you’ve ‘read’. It’s certainly not from the agreed teen fiction reading list we gave you. Again, just deny that you paid people to be fans and avoid starting a race war if at all possible.

GI: Can somebody who looks like an Indian not cheer for England or Spain or for Germany.

GI: You know what this is – this is racism. It’s pure racism.

GI: And we have to stop that because everyone in the world has the right to cheer for who…

F365: Why have you paused? This is too long a pause. Remember your pronouns.

GI: If Europe would really care about the destiny of these young people…

GI: Europe could do as Qatar did, create some legal channels where at least a number, a percentage of these workers could come.

GI: This means we shouldn’t point to what doesn’t work.

GI: Here in Qatar as well there are some things that don’t work. That needs to be addressed.

GI: We need to give hope to Africans so that they don’t need to cross the Mediterranean in order to find, maybe, a better life but more probably death in the sea. We need to give opportunity and we need to give dignity, not by giving charity but by allowing the rest of the world to participate.

This speech is Gianni Infantino's Imagine. His American Pie. His I have a Dream. His Time to Put on Makeup, Time to Light the Lights.

F365: Didn’t address them. Right, you need to talk about the ban on beer. Just tell them that alcohol in the stadiums was going to make many people feel uncomfortable because of their beliefs and apologise for announcing the ban so late.

F365: You’re clearly not and that doesn’t make sense.

GI: Every decision is taken in partnership with the Qatari government.

GI: If this is the biggest issue we have for the World Cup, I will sign for it immediately and go to the beach and relax until the 18th of December.

F365: Before you get your Speedos on, this is definitely not the biggest issue at the World Cup. Have you already forgotten what you were talking about 30 seconds ago?

GI: I think if, for three or four hours a day, you cannot drink a beer, you will survive.

F365: Again, you’re missing the point. People are annoyed because they arrived thinking they could drink beer in the stadiums and have now been told they can’t. Just apologise.

GI: Especially, because actually the same rules apply in France, Spain, Portugal and Scotland where no beer is allowed in stadiums.

F365: Or don’t. Right, that’s it is it? Why are you smiling? Don’t smile, that was the most insane, backwards, insulting speech yet. Just go to your next appointment. Which is… an audience with the Qatari royal family. Jesus.

Read more: Would there be an asterisk next to England if they win Fifa’s Fyre Festival of a World Cup?