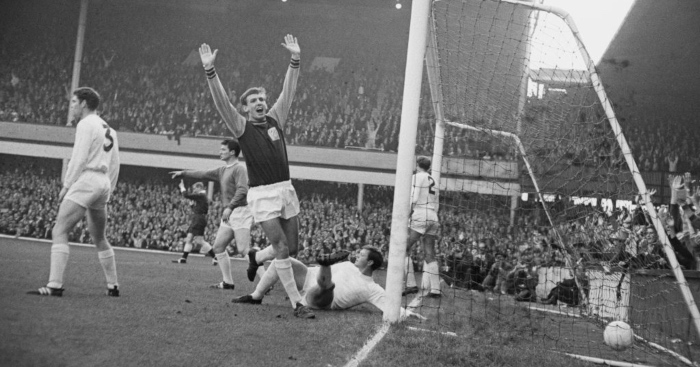 Peters, whose death was announced by West Ham, was part of the Hammers trio of captain Bobby Moore and Geoff Hurst, who scored a hat-trick in the 4-2 victory at Wembley, in Sir Alf Ramsey’s side.

Renowned as being the compete midfielder, Peters was good in the air, able to cross with either foot and possessed great movement, being able to drift into goalscoring positions unnoticed by his markers which would later see him nicknamed ‘The Ghost’.

Peters came through the West Ham academy, having signed as an apprentice in 1959 and went on to help the east London club win the European Cup Winners’ Cup in 1965.

A statement from Peters’ family read: “It is with profound sadness that we announce that Martin passed away peacefully in his sleep at 4.00am this morning (Saturday).

“A beloved husband, dad and grandad, and a kind, gentle and private man, we are devastated by his loss but so very proud of all that he achieved and comforted by the many happy memories we shared. We will be making no further comment and kindly ask that the privacy of our family is respected at this extremely difficult time.”

After more than 300 games and some 100 goals for the Irons, Peters left Upton Park for Tottenham in 1970, becoming Britain’s first £200,000 footballer in a deal which saw striker Jimmy Greaves head in the opposite direction.

While at White Hart Lane, Peters helped Bill Nicholson’s team lift the League Cup at Wembley in 1971 and again, as captain, in 1973, a season after playing his part in Spurs’ UEFA Cup victory over Wolves.

Peters, who earned 67 caps, scoring 20 international goals, also had spells at Norwich and Sheffield United before retiring in 1981.

In 2016, it was revealed Peters had been diagnosed with Alzheimer’s disease, one of several of the 1966 World Cup team to be battling dementia.

He posted: “Sorry to hear that Martin Peters has passed away. One of our World Cup winning heroes. A great player and a true gentleman.”