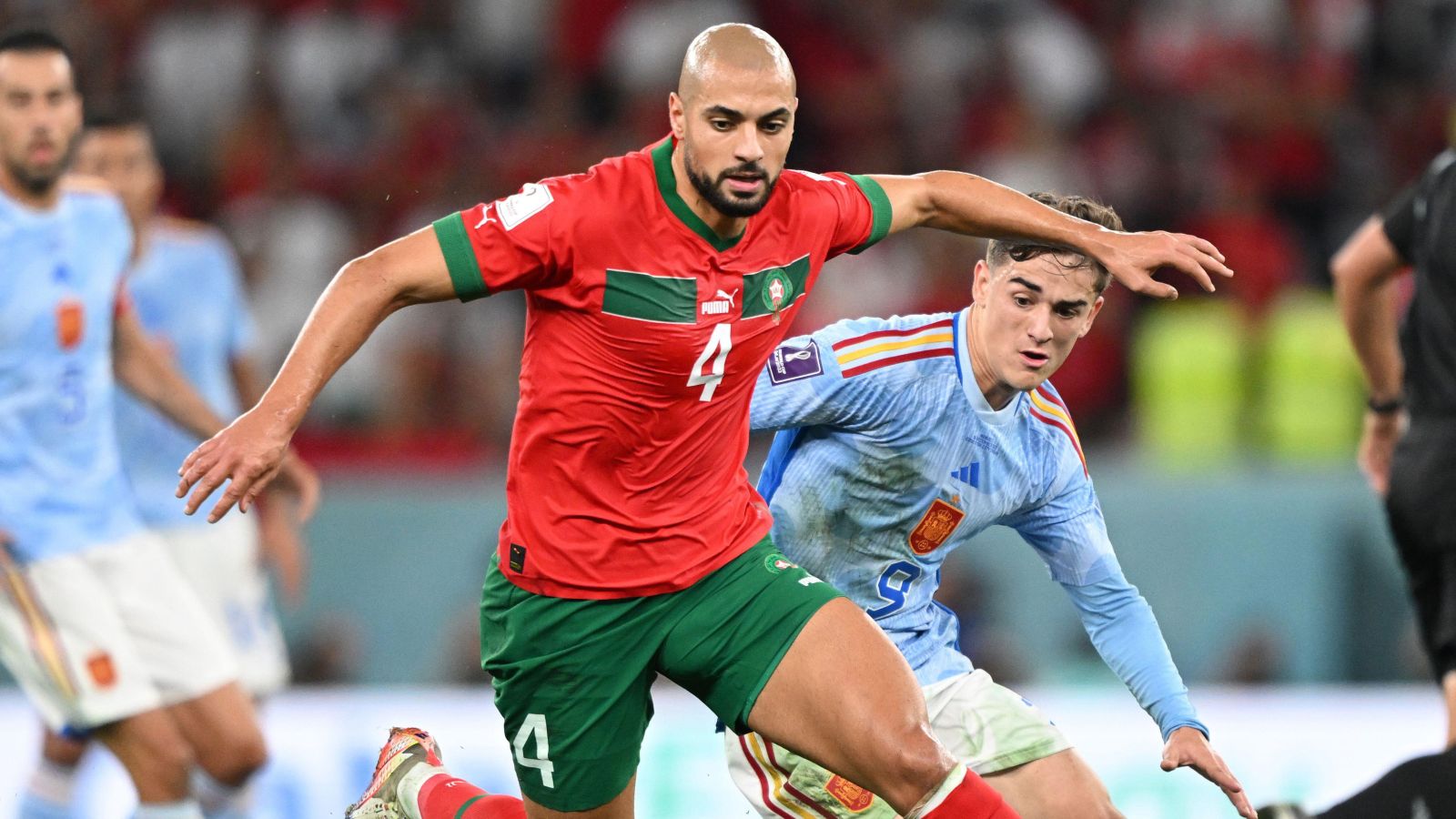 So the original plan was to let our favourite football transfer nerds at transfermarkt.com do the legwork here and just put together an XI of the players whose market values have gone up the most over the last few weeks.

But those lazy boffins haven’t been updating their market values despite World Cup Fever appearing from the outside to be the absolute ideal time to go mad with their interesting and useful but ultimately made-up-numbers-pulled-from-their-backside valuations.

So we had to do something slightly different. There’s a long-closed petrol station near us whose still-illuminated roadside sign advertises diesel at a price of 126.9p per litre, and lots of transfermarkt’s market values from the far off days of mid-November put is in mind of that cut-price but sadly unavailable diesel.

GK: Bono (Morocco)
The Sevilla keeper hasn’t conceded a single goal to an opposition player across two games in the group stage and 120 minutes plus a penalty shoot-out against a team who began the tournament by scoring seven goals in a single game. That is very impressive indeed and we can’t imagine Sevilla now entertaining any offers at all around the 15m euro figure for world football’s top Montreal-born goalkeeper who shows a name with an irritating popstar twat.

A fact which is if we’re honest with ourselves at least part of the reason we’ve put him above Dutch giant Andries Noppert, whose World Cup breakthrough has been one of the stories of the tournament and means that even with only 18 months on his current contract, Heerenveen could now probably expect to get a touch north of a couple of million for their free summer signing from Go Ahead Eagles.

RB: Denzel Dumfries (Netherlands)
Inter paid under 15 million for him less than 18 months ago which already seems like a pretty good deal for a player whose value was up to 28m by the time the domestic music stopped for the World Cup jamboree. A goal and a couple of assists for the Dutch in Qatar surely extends the upward trajectory for that figure.

LB: Noussair Mazraoui (Morocco)
That someone who plays for Bayern Munich having previously been at Ajax is pretty good shouldn’t really surprise anyone, but the fact right-back Mazraoui has done quite so well for ultimate surprise package Morocco operating out of position at left-back might. Bayern didn’t even pay a penny for him in the summer, and 25m euro now surely underplays the value of a player who has shown how adroitly he can adapt to operating on either side of a mean and unbreachable defence. A right-back doing in impeccable job at left-back in a team conceding basically no goals at all…just imagine how much Gareth Southgate must love him.

CB: Josko Gvardiol (Croatia)
While Croatia’s great generation somehow keeps on keeping on the clearest evidence of their future is a precocious 20-year-old centre-back who has what we’re now calling the Bellingham-esque knack for making a position traditionally impossible to master at such a young age look an absurd piece of absolute piss. Chelsea nearly signed him and are probably already in coulda, woulda, shoulda territory on that one, while an apparent Spurs plot to get Ivan Perisic to convince him to join them is absolutely adorable.

Still has four-and-a-half years on a release-clauseless Leipzig contract, and, while the likelihood of Leipzig cashing in either in January or the summer is pretty high, the idea that 60m anythings is now going to be enough to even get a foot in the door is folly.

Has Josko Gvardiol played himself out of Chelsea transfer range for Croatia at the World Cup?

CB: Harry Souttar (Australia)
Yours for about £4m a month ago, according to the transfermarkt lads. While the bad news for Stoke is that they’re definitely going to struggle to keep hold of a man who puts cheese and onion crisps in his sandwiches, the good news is they’re going to get a f**ksight more than £4m for him now with pretty much the entire bottom half of the Premier League to be found beating a path to their door after his stellar performances for the least obnoxious Australia side in any sport.

CM: Tyler Adams (USA)
The best of the fine assortment of Red Bull graduates Jesse Marsch brought to Leeds in the summer, Adams had a brilliant World Cup and personified all that was good about a USA team who were superbly organised, supremely fit and tactically astute. They were rubbish at scoring goals, but that is of no concern to Adams. The maturity of Adams, captain of his country at 23, extended to his thoughtful and erudite handling of awkward questions ahead of the politically-charged Iran game. We urge anyone to get in touch with Leeds and see how far their 17m euro offer gets them.

CM: Sofyan Amrabat (Morocco)
By astonishing coincidence, today’s papers and football websites are absolute chock-full of stories linking a man who did more than most to bundle Spain out of the World Cup with a move to Liverpool. His 10m euro value on transfermarkt has, though, apparently spiralled to £25m. Which probably still isn’t close.

CM: Jude Bellingham (England)
Most players whose value rockets at a major tournament do so, obviously, from a relatively low base. Easier to do that, isn’t it? Stands to reason. But sometimes a player who already has a sky-high estimate price proves that he is in fact even better than everyone already thought, which was extremely good indeed. Imagine thinking you might nab Bellingham for a mere 100m euro after this.

LF: Cody Gakpo (Netherlands)
Long touted as the next big thing and a transfer feeding frenzy was already inevitable before he scored in all three of the Netherlands’ group games. We very much enjoyed Ally McCoist being an avowed Gakpo-sceptic after about 30 minutes of their first game but then reminding us all that he has the vanishingly rare gift among co-commentators of acknowledging when he’s wrong – even revelling in it, half the time – rather than either doubling down or simply acting like the previous opinions were not only never held but also never expressed on the television to an audience of millions. We love Coisty.

Anyway, he apparently has no release clause in a PSV deal that runs until January 2026 but one of those ‘understandings’ about a ‘suitable deal’ that Daniel Levy is so very fond of. Either way, we’re pretty sure that PSV will no longer consider 45m euro ‘suitable’ – if indeed they ever would have – and that your Southamptons and your Leeds Uniteds will be less involved in future Gakpo transfer tittle-tattle than they were last summer.

RF: Ritsu Doan (Japan)
Lovely stuff for Freiburg, this. Bought him for eight million euro in the summer and, having scored two goals in 15 Bundesliga games, is now worth probably three or four times that if they decide on a swift cash-in. Two World Cup goals for every neutral’s favourite stadium-tidying great bunch of lads will do things that two Bundesliga goals cannot.

CF: Cho Gue-sung (South Korea)
Two goals in three minutes didn’t ultimately get Korea a result against Ghana, thanks to the efforts of Mohammed Kudus who we’ve just realised should also definitely have been in this team somewhere but never mind. Those goals could still change Cho’s life, though, stealing the limelight from masked man Son Heung-min and bringing K-League side Jeonbuk Hyundai’s striker and his Hallyuwood looks to a global audience. He was worth 1.4m euro as of November 14 according to transfermarkt. Yeah, no.