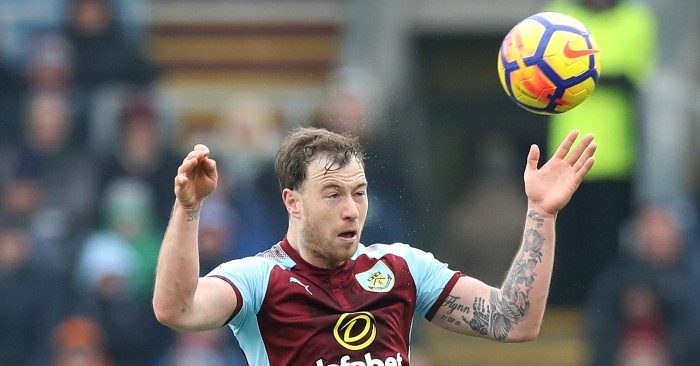 I cheated this week. We had lots of good right-backs and zero left-backs. So I cheated, pure and simple, and in my old age will be consigned to the Garth Crooks Home For The Terminally Misplaced. Anyway, it came out a 4-1-4-1:

Goalkeeper: Jack Butland (Stoke City)
In an ordinary week for keepers, it’s a straight England face-off between Butland and Jordan Pickford. The Everton man had the more difficult saves, but I’m less forgiving than Sarah Winterburn on the Ashley Barnes goal. Pickford should have come off his line, he didn’t, and Burnley scored. Butland’s stops were good in their own right, and he came off the line twice with powerful punches. Right now I think Pickford’s a bit ahead of him, but it’s anybody’s call come Russia. Asmir Begovic gets points for good command of the area, not always his strength.

Right-Back: Cédric (Southampton)
In a direct plug for my latest Ordinary Player column, he delivered his best performance in months. Incisive passing, regular forward runs, dangerous crosses. Was denied on a fine save by Butland. Used his quickness well to recover when faced with taller opponents, and found time to make a game-saving clearance in the 92nd minute.

It was a fine week for right-backs. Aaron Wan-Bissaka struggled a bit in the first half but was excellent against Marcus Rashford in the second. If full-backs didn’t have to defend, Matthew Lowton would have posted one of the performances of the season, with no less than three outstanding chances created for Ashley Barnes. (See below.) Alas, the other team had the ball at times, and in the latter part of the game he was repeatedly embarrassed.

Elsewhere, Kyle Naughton (yes, that Kyle Naughton) had his best game of the season for Swansea, getting the better of Patrice Evra on a regular basis.

Centre-Half: Cesar Azpilicueta (Chelsea)
It’s easier to defend when that’s all you’re doing, but it’s not so easy to defend when you’re facing Leroy Sané and David Silva. No way he was going to shut them off completely, but kept them at bay until the goal, which wasn’t his fault.

It's literally Willian and Azpilicueta against Manchester City

Centre-Half: Bruno Martins Indi (Stoke City)
A tight call between Martins Indi and his teammate Kurt Zouma. (KHZ hosted the broadcast, BMI brought the music.) Martins Indi would have made it on the newbie tiebreaker, but in any case I rated him a tiny bit higher. Zouma had the more interventions, but Martins Indi was the more consistent, and indeed twice made the play when Zouma couldn’t. Was himself beaten cleanly once by Josh Sims, and Sims is pretty fast, but recovered and made up the ground to block the shot. Gets extra points for winning a couple of aerial duels, normally the weakest part of his game.

Elsewhere, Shane Duffy keeps going up in my estimation, and the Huddersfield pair of Zanka and Christopher Schindler held off Spurs as much as possible.

Left-Back (not really): Jeffrey Schlupp (Crystal Palace)
He didn’t play left-back on Monday night, and I can’t pretend he did. He played left midfield. My only justification is that most of the time he was defending, and very impressively at that. Recovered a lot of loose balls, and was constantly in the way. He also had the smarts to take the quick free-kick that led to Patrick van Aanholt’s goal. Why didn’t I choose van Aanholt, a real left-back? He didn’t defend well, particularly in the second half when Palace’s backs were to the wall. If I watched all 10 games over maybe I could pick out the slightly best true left-back performance, but even I have my limits. Schlupp it is.

Deep Midfielder: Davy Pröpper (Brighton)
Makes the list in his 29th start, and it’s no upset – he seems to improve a little bit every week. Was excellent repelling whatever Arsenal had to offer, and as ever used the ball well. Calm and tidy, with little wasted motion, he’s one of the many players that fit Chris Hughton’s Seagulls to perfection.

Can we all just take a moment to appreciate Davy Propper. What a sensation signing, desperate for him to bag a goal. Very astute from @paulwinstanley9 and the recruitment team. #bhafc

Wilfred Ndidi had an inspired second half, and would have breezed into the list except for his quite obvious shove on Charlie Daniels that was inexplicably not called a penalty. Jordan Henderson (remember him?) had a strong match, with intelligent defending and a wide range of passes. Joe Allen gave new meaning to the phrase ‘engine room’.

Right Winger: André Ayew (Swansea City)
Carlos Carvalhal is the puzzle-master, and Ayew is the missing piece. Getting his first start (this time) for the Swans, Jordan’s Older Brother combined superbly on the right side of attack, took up excellent positions in the box, won a whole lot of aerial duels, and harassed anyone who had the ball. Laid the ball off for the first goal, headed hard at the keeper to force a rebound for the third, won the penalty for the fourth. Looked dangerous even when standing still. If he stays healthy, Swansea City survive.

Left Winger: Son Heung-Min (Tottenham Hotspur)
I’m starting to reach Storey-Lukaku levels of infatuation with this guy. You know those comedy diagrams that divide up a person’s brain into what they’re generally thinking? For Son, mine would be just one big field reading ATTACK. Lovely finishes for both goals, a mere seven successful dribbles, and as always that big big smile. He deserves his place in this list.

Elsewhere, Andros Townsend just missed out with a great show against Manchester United. The goal was a bit of a fluke, but his running and defending most definitely weren’t. Incredible that he wound up on the losing side.

Attacking Midfielder: Pascal Gross (Brighton & Hove Albion)
As has been said many times over, the bargain of the season. Just a fantastic effort against Arsenal, in the middle of everything with his cool head and superb technique. The best crosser in the league: you could see that one for Glenn Murray coming all the way from the Pavilion, but there was no way to stop it. Apropros of nothing, he might be the slowest midfielder in the league, which somehow makes him that much more wonderful.

Attacking Midfielder: David Silva (Manchester City)
This was the hardest decision of all, either Silva or Alex Oxlade-Chamberlain. Both had made the list before, and both were good in their special ways. Silva danced and disposed, and eventually made the run and pass for the winning goal. The Ox worked hard to stop attacks and drove forward to start them, adding a nifty through ball for Liverpool’s opener. I went with Silva because the quality of the opposition was higher, but the Merseyside man was equally worthy, and Reds fans are welcome to put him on instead of Silva.

Striker: Ashley Barnes (Burnley)
It’s been quite the season for The Angriest Dog In The World. Five goals, all but one giving Burnley the lead or levelling the score. Advert #1 for football as a contact sport, he breaks all the plates, teacups and mirrors in the house, all the while looking like he’s ready to kick someone’s ass, preferably yours. Against Everton he left bruises on 80% of Michael Keane’s body, got Ashley Williams riled enough to red card himself, found space at will, and scored a most untypical behind-the-defence goal. Would have had a hat trick if not for two top-class saves by Jordan Pickford.

Elsewhere, Glenn Murray continued his Not Going To The World Cup Tour with another strong performance, not very different style-wise from that of Barnes. (Cech should have stopped his goal, though.) Worked hard as always in every phase of the game. His abortive breakaway should make every highlight reel for the next 20 years.