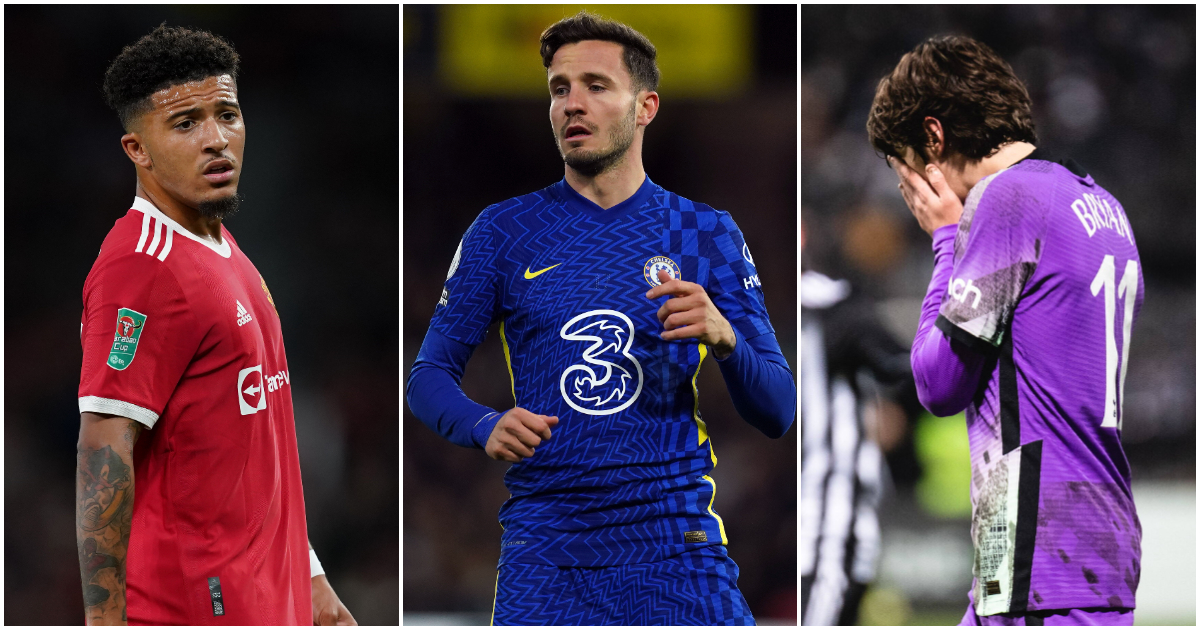 Manchester United are among four clubs who have more than one representative in this XI of the worst Premier League signings made this summer.

Not all transfers can pay off. Some will go wrong. It is the name of the game. So which runs are going wrong right now? Very straightforward rules for this one: any players who moved clubs in the summer are eligible, loans or permanents – we don’t care, there is no minimum appearance requirement and the metric for deciding who gets the nod? Entirely subjective whim. On we go, then.

GK: Pierluigi Gollini (Tottenham)
The loan signing from Atalanta should probably be cut some slack because most of his appearances have come during Spurs’ shambolic Europa Conference League campaign. But there’s a chicken-and-egg side to that, with Gollini’s goalkeeping a non-trivial factor in the shambling.

We’re not experts on goalkeepers or goalkeeping, but one thing we have noticed over the years is that goalkeepers tend to move. They’re forever moving off the goalline, for instance, or diving to try and save the ball, or sticking their legs out to try and make a block and so on. Not Gollini, who has taken a minimalist approach to the art, preferring instead to stand stock still and watch shots fly past him. It’s a bold strategy, Cotton.

RB: Axel Tuanzebe (Aston Villa)
The Manchester United loanee hasn’t featured since Steven Gerrard’s arrival in the Midlands. Tuanzebe had a far more successful previous loan spell at Villa in their promotion season and would surely have anticipated some more good times under Dean Smith. Smith is now gone, and at present speed and course he might not be the only one having his contract cut short. Forced out to right-back in this fictitious XI, because all fictitious XIs have to have someone playing slightly out of position if only because it literally doesn’t matter as the team doesn’t really exist.

CB: Jannik Vestergaard (Leicester)
Has described his time at Leicester after a fine spell at Southampton as both “an upheaval” and “a bit uneven” which is, we’re assuming, a lovely bit of Danish-English translation at work. Perfect description, though, and one which we intend to borrow for all the times we’re making a mess of something. This feature is a bit uneven. The cleaning of that toilet is a bit uneven. The quality of tonight’s dinner is a bit uneven. We’re also just broadly in favour more generally speaking of players describing their football in a way that sounds so very much like Paul Hollywood judging a technical on the Bake-Off.

CB: Raphael Varane (Manchester United)
Now he’s obviously excellent and has played perfectly well when he’s been fit. But that’s precisely the problem: he isn’t fit often enough, yet is undoubtedly a shoo-in any time he is. This is a dynamic that has only served to create yet more confusion in an area of the pitch where United were already a pickle. Clearly, injury problems are the result of bad luck to a greater or lesser extent, but this was always a plausible scenario and one United were aware of.

LB: Junior Firpo (Leeds)
Adapting to life in England under Marcelo Bielsa is an eyebrow-raising challenge for any new player, so when your early weeks at the club are marked by both catching Covid and then getting injured for four, it’s perhaps not surprising that Firpo has found it such a struggle to settle into a new club with new tactics, with man-marking proving particularly taxing.

CM: Saul Niguez (Chelsea)
Looked a very canny bit of business when Chelsea swooped on deadline day. Has turned out to be just another example of how badly we can all get things wrong on that day of silliness. Main contribution in a Chelsea shirt thus far has been to serve as constant reminder of how good Jorginho really is.

CM: Joe Willock (Newcastle)
Last season, on loan: eight goals in 14 games to catapult Newcastle out of relegation danger and up the table.

This season, on a permanent: no goals in 12 games as Newcastle plunge into a grim relegation scrap that could have far-reaching consequences for everyone.

RW: Jadon Sancho (Manchester United)
Of all the players on this list he’s the one you’d be most confident will soon play his way off it. He’s just altogether too good not to, surely. But his early months at Old Trafford have assuredly not gone to plan. There are few more damning indictments of the Ole Gunnar Solskjaer reign than him finally getting his hands on the player United had pursued at the exclusion of all others for so very, very long, and then not having the first clue what to do with his shiny new toy.

AM: Leon Bailey (Aston Villa)
Injuries have played a part but it’s still been a disappointing start for the Jamaican, especially after such an impressive 2019/20 in the Bundesliga with Bayer Leverkusen.

LW: Bryan Gil (Tottenham)
Has time on his side, might come good, bags of talent etc. and so forth. Has offered precious little in either the Europa Conference or a handful of brief Premier League sorties to suggest he’s about to crack English football open. He’s precisely the sort of player who could just burst to life at any moment or hit an unsustainable purple patch of goals and assists. But for now he just looks a little boy lost under his Beatle barnet and to top it all off Spurs gave away loads of cash and the People’s Sh*thouse himself Erik Lamela to bring Bryan here. So far it’s been a duff trade, with Lamela for his part enjoying a rare old time in Spain as a highly effective super sub for Sevilla.

CF: Romelu Lukaku (Chelsea)
Look, it’s not like he’s been utterly terrible or anything but since beasting Arsenal in his first game back at Chelsea it just really hasn’t seemed to happen for Lukaku. After spending all that money – and understandably so given Lukaku’s record and pedigree – Chelsea look a better side without him, letting all their little clever players go off and be little and clever, than they do with him. That’s sub-optimal for someone who cost nine figures.