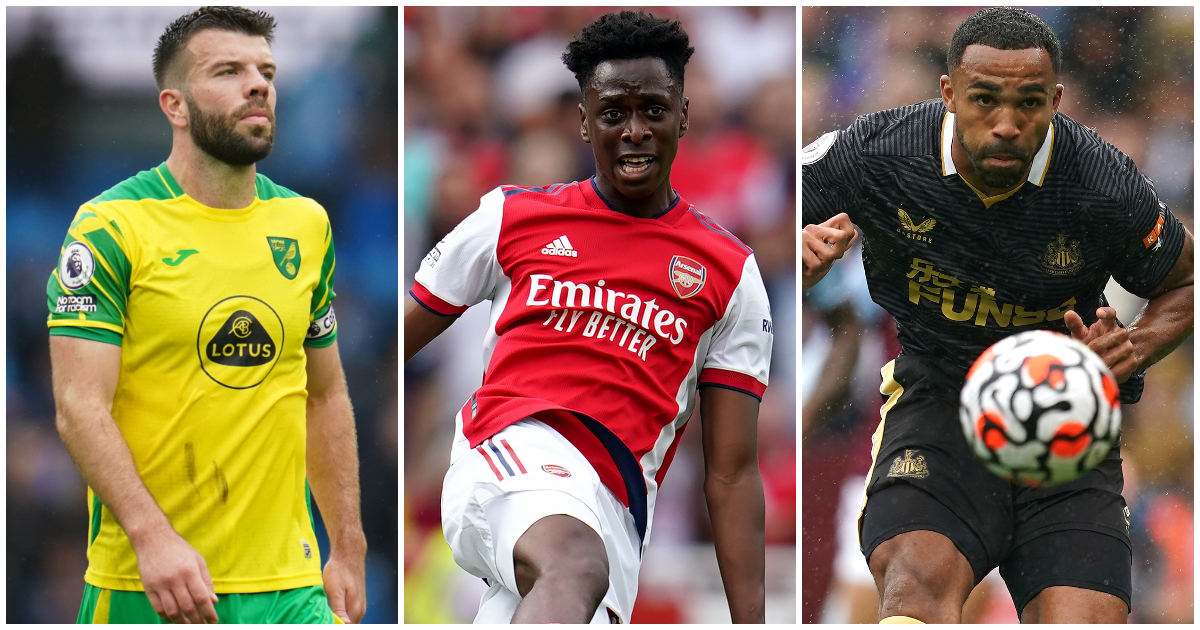 Once again, two Arsenal players feature in the weekend’s worst Premier League XI, according to WhoScored ratings. One of those Gunners might consider himself hard done by…

Goalkeeper: Tim Krul
The Norwich keeper presumably had that sinking feeling when Grant Hanley tw*tted a sixth-minute clearance straight at him which then cannoned back into his own net to gift Manchester City an opener they were more than capable of finding themselves. There was little Krul could do about the other four goals Norwich shipped – City’s only four shots on target – with the keeper badly exposed while his team-mates kept making the same mistakes. But another 5-0 humping makes it 23 goals conceded in his last five appearances against City.

Left-back: Kieran Tierney
Four of City’s five goals came from the left but somehow, the Norwich left-backs who had a half each both scored higher than any of their defensive team-mates. So Tierney takes this place after 66 dizzying minutes of watching Reece James – the weekend’s highest-rated player – fly past him while failing to make a single tackle.

Centre-back: Grant Hanley
It’s been a chastening return to the Premier League for the Norwich captain, having faced Liverpool’s front three on the opening weekend and Man City in the mood on Saturday. Neither he nor central defensive partner Ben Gibson managed a single tackle at the Etihad but Gibson’s nine blocks earned him a higher score than Hanley’s 5.4 – the lowest rating for an outfield player this weekend.

Centre-back: Jamaal Lascelles
The Newcastle defender lost the aerial duel with Tyrone Mings that saw the Villa centre-back tee-up Danny Ings for his spectacular opener before conceding a second-half penalty header which killed off any hopes of a Toon comeback. Just a miserable day at the office for Steve Bruce’s skipper.

Right-back: Max Aarons
Despite City getting all their joy down the Norwich left, Aarons claims the right-back berth with a score of 5.8. Any club scouting the in-demand defender might think twice about making a late offer before the deadline after Aarons ended a miserable afternoon with the lowest pass-completion rate of any Norwich outfield player.

Left midfield: Lukas Rupp
Daniel Farke admitted he waited until half-time to substitute Dimi Giannoulis so as not to embarrass the left-back, and Rupp was hooked at the same time after failing to protect the defender while City exposed Norwich on the right. In fairness, the 30-year-old was too busy being given the runaround by Bernardo Silva to worry about Gabriel Jesus pulling Giannoulis’s pants down. His solitary contribution in 45 dreadful minutes was a single block.

Central midfield: Albert Lokonga
Harsh, this. Many Arsenal fans saw Lokonga as their best player against Chelsea, with the new signing one of very few positives during their opening two defeats. But according to WhoScored, only Tierney rated lower of the 28 players to feature at the Emirates. Statistically, Lokonga was outshone by Granit Xhaka, but anyone with functioning eyes will have been more impressed with the new boy’s intent and drive.

Emile Smith Rowe & Sambi Lokonga were both brilliant today. In a team that wasn’t up to it, these two stood out, as they did against Brentford as well.

Well done to them. #afc pic.twitter.com/S5VB9vyhyc

Right midfield: Ken Sema
Sema played on the left in Watford’s defeat at Brighton but we have to shuffle him across to be able to accommodate both he and Rupp in the same wretched midfield. If the Hornets are to survive their first season back in the Premier League then Ismaila Sarr will need more help in providing creativity from wide than Sema or either of their full-backs offered at the AmEx. From the left, Sema failed to complete a single cross, dribble, shot or long ball. Defensively, he was the only player on the pitch not to manage a single tackle, interception, clearance or block.

Forward: Anthony Martial
Martial was given the centre-forward role by Ole Gunnar Solskjaer at Southampton but the Frenchman was largely anonymous before being hooked on the hour. In fairness, United hardly improved in his absence. If anything, they got worse. But Solskjaer will expect more from his line leader than 13 touches and a single pass every 10 minutes, a third of which failed to find a team-mate. Martial needed to impress, especially in the wake of Mason Greenwood’s impressive display against Leeds last week, but his performance only intensified the clamour for Edinson Cavani’s return.

Centre-forward: Callum Wilson
The Newcastle striker wasted a gilt-edged chance at 0-0 to put the Magpies ahead, failing to hit the target when one-on-one with Emi Martinez. It set the tone for an afternoon to forget, with Wilson earning a second-half penalty by being clattered by Martinez, only for the decision to be reversed when it emerged the striker was half a shoe size offside.

Forward: Milot Rashica
At least the new boy managed a shot at the Etihad – Norwich’s solitary effort on Ederson’s goal – even if it was high and wide of the target. Rashica has spent the first two matches of his Premier League career chasing Trent Alexander-Arnold and Kyle Walker back towards his own goal. It will get easier for the Kosovan. It has to…