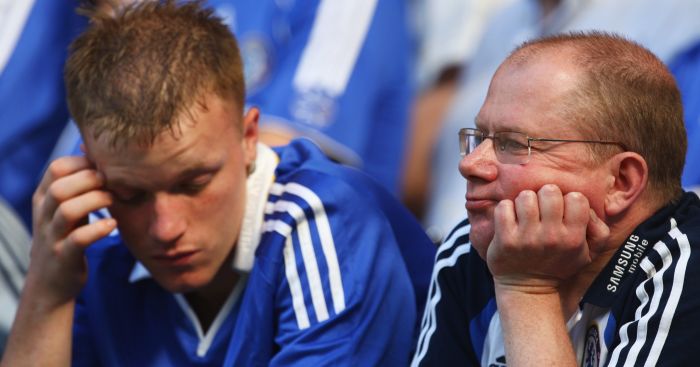 The press box at Cardiff City Stadium sits to the right of the technical area and to the left of the away fans, who stand in the corner on the opposite side. On Sunday, that placed journalists at the junction between Maurizio Sarri, a terribly disappointing Chelsea performance on the pitch, and a mutinous band of travelling supporters.

It was awkward. The chants were tentative at first and isolated to just a few sections. As the moves on the field continued to break down, though, and after Victor Camarasa gave Cardiff the lead, they became louder and more widespread.

“We want Sarri out…”

Sarri didn’t respond at all. He spent most of the second half with his arms folded and looking away from the fans. After the game, he was asked about the atmosphere, but didn’t bite, saying only that he felt sorry for his players, who had been “fighting hard” and that he wished the fans had waited until after the game to air their grievances.

His decision to move to England looks bizarre in retrospect. Sarri spent his three years at Napoli installing a highly technical vision. The team he left behind were among the most attractive in Europe and were certainly the most admired, and – no matter what difficulties he’s experiencing now – Sarri should not be separated from that success.

But Napoli were an intricate jigsaw. Not only did Sarri have the right players to enact his vision, but he was equipped with players willing to be adapted to it. Manipulation is a great managerial currency and yet often it’s ignored; if a head coach isn’t able to sell his ideas to a group, then they’re ultimately redundant.

Sarri is intelligent. His limited English still masks his personality to an extent and translators always skew the press conference dynamic, but he’s a smart man who evidently thinks deeply about the game. The curiosity, then, is why the problems he’s facing now didn’t occur to him sooner: any due diligence at all would have revealed that recruitment is a major issue at Stamford Bridge. For coaches who like to work without the burden of the transfer market, who are just happy to be given broad talent year-on-year, that would be fine. For the technocrats, the more modern, detail-obsessed generation of which Sarri is one, it can be a major hindrance.

As for pliability, Sarri doesn’t have that luxury either. A cursory glance at the history of this Chelsea squad would have revealed that they don’t always respond well to change and that challenging them publicly often leads to death by clique. Sarri would have known that, yet he’s fallen right into the trap.

What he should also have realised is that during any period of under-performance, the coach becomes the villain. Chelsea are currently sixth in the table, they’ve reached a domestic cup final and are still involved in Europe. At the time of writing, they remain competitive in the race for the top four too. And yet the hostility is palpable. Not just towards Sarri, but towards anyone associated with him: Jorginho was jeered off at the weekend and, in a few more weeks and after many more performances of the same tone, it wouldn’t be a surprise to hear the crowd also turn on Gonzalo Higuain.

Other clubs’ supporters just shake their head. Contextually – yes – Chelsea are having a disappointing year and their football has often been limp. But Sarri’s work is being treated as an act of vandalism and that, clearly, is a huge over-reaction.

Secretly, people love it. Chelsea put more than a few noses out of joint during their rise to the game’s summit. That inconvenience has always been softened by the presumption that their fanbase consists entirely of Tim Lovejoy-types – the kind of people who love the winning and the crowing, but not really the game itself. When your team is less successful, it’s comforting to fall back on the belief that your fandom is purer. You’ll stand in the rain. They won’t.

There is actually some truth in that, but perhaps there’s also a case for saying that Chelsea fans get a bad press. Or, at least, for arguing that their attitude towards their team is a symptom of how their club is run, rather than a permanent and defining characteristic of what the club is.

This, after all, is what they’ve grown used to. Roman Abramovich didn’t just buy the club, he rippled his own personality through Chelsea’s culture, disturbing it forever. In the almost two decades since his takeover, it would be very strange if those fans had not to be conditioned to think about their team in the same way that he does. If an owner demonstrates that even mild failure is completely unacceptable – and creates precedent after precedent to support that – eventually the crowd is going to follow.

This is what really needs to change and with greater urgency with each season.

Success in the modern game seems to depend on a particular type of manager. It’s not a coincidence that places one and two in the Premier League are filled by teams – and organisations – which have been constructed around coaching ideologues. It’s also important to remember that neither Jurgen Klopp nor Pep Guardiola were roaring successes in their first season. Klopp’s Liverpool actually took around 18 months to properly form and Guardiola’s City, although dominant now, were at times a laughing stock in 2016-17.

The point is not to claim that just with a little more time Sarri will eventually become a success. Instead, it’s to wonder what would have happened to Klopp or Guardiola had either of their difficult first seasons happened at Stamford Bridge.

We know that the executive structure above wouldn’t have been bent around them, that’s for certain. It’s also fair to assume that they would have been given players to manage, rather than being allowed to select them. But, in a more abstract sense, would the culture itself have been prohibitive? The modern head coach is really more priest than manager, because he’s not just expected to pick a team and implement tactics, but to begin a movement defined by a specific footballing belief. Manchester City have a particular way of playing, and Liverpool do too. They’re not clubs, they’re churches. Because their wealth is supported by a coherent idea, which enraptures fans and attracts players of certain suitability, those clubs are more powerful as a result.

It sounds too philosophical to be true, but it’s a clear common theme – and it’s one which Chelsea definitely don’t share.

Worse, it’s the kind of evolution which – currently – could never exist at that club. While Sarri may have been a clear step in that direction, his appointment was really only indicative of superficial change. Essentially, he has been asked to cultivate the kind of environment created by Klopp and Guardiola, but has only been given a tracksuit and a set of training cones. The result is an imperfect team, a mismatch of ideas and playing styles, and the lingering perception that always hangs in the air at Chelsea: that a quick jolt of success is only a redundancy payment away. Sarri isn’t a priest, he’s barely even the guy cutting churchyard grass.

That will only change when the club do. It’s imperative that that happens, too, because the era of chop and change, spend high and sell at a loss is over for them; there are some mighty fish in the water now and Chelsea are nowhere near the top of the food chain. If they want to develop the kind of advantages gained through semi-long-term management – which they absolutely need – then they have to create the conditions in which that style can be accepted and flourish. Ultimately, until there are signs of clear mutual dependency, a point at which the head coach has a key for every room at Stamford Bridge and not just his own office, Chelsea’s manager will continue to be just another employee and, inevitably, be treated as such by the fanbase.