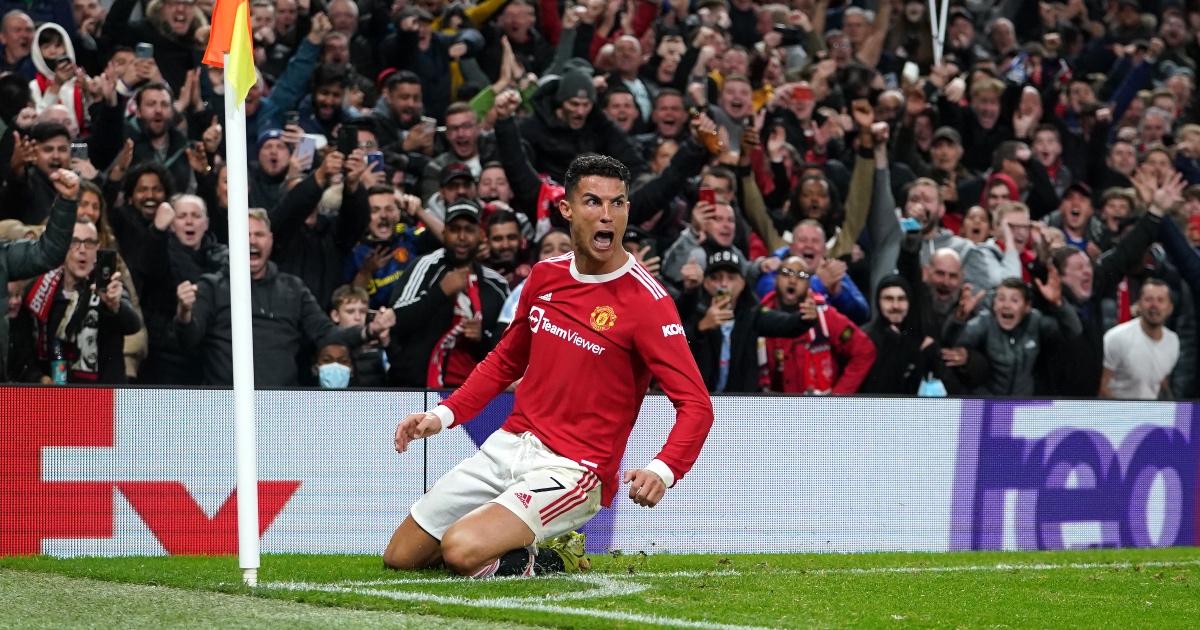 ‘Who else but him?’ said almost every football Twitter account on Wednesday night after Cristiano Ronaldo scored another late winner. Well, if Ole Gunnar Solskjaer wants to win something, any other Manchester United striker would be good…

Ronaldo’s 81st minute goal and his subsequent eyebrow raise, head bob and shrug when told he had “done it again” in his post-match interview, tells you everything you need to know about the man. He’s an extraordinary goalscorer, whose ability to pop up in big moments you cannot help but admire, begrudgingly or otherwise, with a jarring arrogance befitting his standing in the history of the game.

You did it again, @Cristiano… 😏#UCL pic.twitter.com/zRkFIXfEbk

It was a towering header, with that majestic hang time we’ve come to expect from possibly the greatest aerial threat ever to play football. It was his second Champions League winner of the season after his 95th-minute strike against Villarreal. And on the basis of those two goals, without Ronaldo, United would be bottom of Group F with no points, rather than top.

It’s an overly simplistic summary of events that lends credence to Sir Alex Ferguson’s view that “you should always start with your best players”. Firstly, he didn’t, and secondly, he wouldn’t if that ‘best player’ made the team less effective.

United have picked up six points from the four Premier League games Ronaldo has started this year, compared to ten from the same fixtures last season. It’s too small a sample size for that alone to be sufficient to pass judgement, but Ronaldo’s stats from those games – and one stat in particular – should be enough to at least adjust the CR7 blinkers.

“If anyone wants to criticise [Ronaldo] for work rate or attitude, just watch this game. Watch how he runs around,” Solskjaer said – one of many strange comments in his post-match interview. Well yes, we saw him tracking back and we’ve seen United fans losing their minds on social media at the sight of a 36-year-old running.

But the problem isn’t that he doesn’t defend when his team needs him, or that he doesn’t work hard. The criticism aimed at Ronaldo is that he doesn’t press the ball, and he definitely deserves that criticism. He averages 3.83 presses per game. Out of the 29 Premier League players to press less than Ronaldo this season, 25 of them are goalkeepers and the other four are centre-backs. The second worst pressing striker is Romelu Lukaku and he presses nearly twice as much. Pierre-Emerick Aubameyang, often maligned for his lack of work-rate, averages 16.6. Edinson Cavani – the man being kept out of the team by Ronaldo – averaged 13.7 last season.

There will be those that argue United’s need for late goals isn’t a new thing – they’ve been the comeback kings under Solskjaer for some time. But just as that could be used as evidence that Ronaldo isn’t the cause of slow starts and a general malaise, it could also serve as proof that United don’t need Ronaldo’s late goals; others were scoring them long before he arrived.

Very few teams can carry static players. Barcelona managed it with Messi, Real Madrid handled Ronaldo and Chelsea, to a lesser extent, did so with Eden Hazard. But in order for it to work, that individual must be the only limiting factor – everyone else has to make up for their idleness and be organised in such a way that nine outfield players can press like ten. As evidenced by their display against Leicester, in which one player would ‘go’ before waving their arms in frustration when they weren’t followed and easily bypassed, such organisation is not in place.

And even if the other players are making up for their teammate’s shortcomings, it only makes sense if that teammate is performing at a level that other, less vaunted members of the squad are unable to reach.

Ronaldo has a better minutes-per-goal ratio (112) than Cavani last season (128). But considering Ronaldo is yet to claim an assist, Cavani comfortably betters his fellow striker on goal contributions with a goal or an assist every 94 minutes.

If Ronaldo were performing at Mohamed Salah’s level, he would be worth carrying. But then that’s a moot point, because Salah does press, and if he didn’t, “[Jurgen] Klopp would haul him off”. It would have been fascinating to see how Pep Guardiola managed Ronaldo had he gone to Manchester City. Without the kid gloves of Solskjaer, one suspects.

Jamie Carragher said: “Ronaldo could prove to be a better signing for the Premier League than for Manchester United.” He’s definitely not a good signing for Solskjaer, who can’t leave him out for fear of the dressing room mutiny Ronaldo would lead, but he is unable to play the sort of pressing football that wins Premier League titles with him in the team.

There is a solution to the problem of a striker that hampers the team dynamic but produces magic moments when called upon, often late in games. Make that player a substitute. But Solskjaer tried that once, drew to Everton, got stick from ‘the gaffer’ and had a hole burned into the back of his head on the touchline by the eyes of the pouting Portuguese sat behind him.

Ronaldo will score goals for United, but as Carragher predicted, he’s currently “causing more problems than he solves” under a manager lacking the authority to do anything about it.