Home Manchester United Would you rather be Martial (20) or Winks (20)? 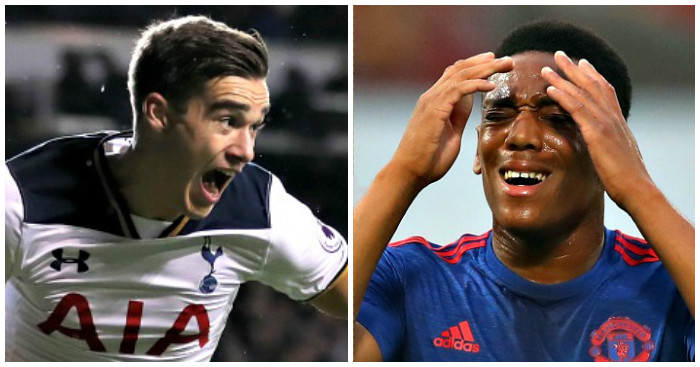 Anthony Martial was substituted after 66 minutes of Manchester United’s then-goalless clash with Arsenal to polite, distracted applause; Jose Mourinho had to make a change with an abject Gunners side looking vulnerable, and Martial was the obvious sacrificial lamb. The substitution barely registered on his face; he had utterly failed to realise pre-match predictions of a ritual right-back slaughter.

Martial is a French international with 15 caps and a £38.5m transfer on his CV (we can shelve talks of a £61.5m final figure as those add-ons now look more like dream-ons). Subdued in his performances and subdued in his demeanour, it’s difficult to believe that Martial cares that his first Premier League start in two months is unlikely to lead to another in the next two months. By all accounts, Mourinho has tried both carrot and stick and still Martial is not clearing any hurdles.

“He doesn’t look happy at times, he needs more energy and dynamism in his game,” said Gary Neville after Saturday’s latest non-performance. And that is perhaps the key; Martial does not look happy. Or sad. Or anything really. And frankly, why would he? At just 20, he is not yet emotionally mature and yet his salary and Instagram following both stretch into the millions. According to the mother of his child, he has “changed completely from the modest, shy and loving young man” she met in Monaco.

Just a few hours after Martial once again failed to complete 90 minutes in the Premier League, Harry Winks was making his first start in the competition and marked it with a goal in a 3-2 London derby. His celebration for Tottenham’s first equaliser was an instant heartwarmer, and his manager later revealed that he “needed to cry” in the changing-room, describing that outpouring of emotion as “fantastic”.

His journey may have been geographically short – from Hemel Hempstead to north London – but Winks’ debut came 28 months after he first appeared on a Premier League bench, when he had sat alongside the similarly unused Harry Kane as Roberto Soldado, Gylfi Sigurdsson and Nabil Bentaleb played in a Tottenham side battered comprehensively by Liverpool. This breakthrough has been a long time coming and that was reflected in the way he personally thanked all his Academy coaches after the game, while acknowledging that this “is only the start”.

Winks has just one England Under-21 appearance to his name and has played a grand total of 12 senior games in football, being the victim/beneficiary of Pochettino’s policy of refusing to send his most promising young players out on loan. The Argentine does not want Winks, Josh Onomah or Cameron Carter-Vickers to learn at the feet of other coaches who do not preach his pressing style. To Pochettino, there is little point Winks playing 30 games in the Championship and returning as a player who cannot seamlessly operate in his system.

There are just two months between the birthdays of Martial and Winks but one likely earns four or five times the wages of the other, while having almost 50 times the number of Instagram followers. And yet who would you rather be this week as one ponders a place on the bench (or worse) in the Europa League at a club for which he has no natural affinity under a manager exasperated by his stagnation, while the other wonders how many minutes he will get against Monaco in the Champions League for his boyhood club and whether he will get another hug? In Harry Kane’s words, he has “instantly become a hero” with that one goal against West Ham.

It’s a genuine question and I’m by no means saying I even know my own answer. You may argue that you would rather be the presumably more talented player at the bigger club, but you may also argue that a hug from Pochettino and the adoration of your fans is worth far more than money or fame. Is the snail ultimately happier than the hare because he is never far from home? We should just do a poll…