Home All The News ‘It wouldn’t be a surprise’ if season was suspended, says Wilder 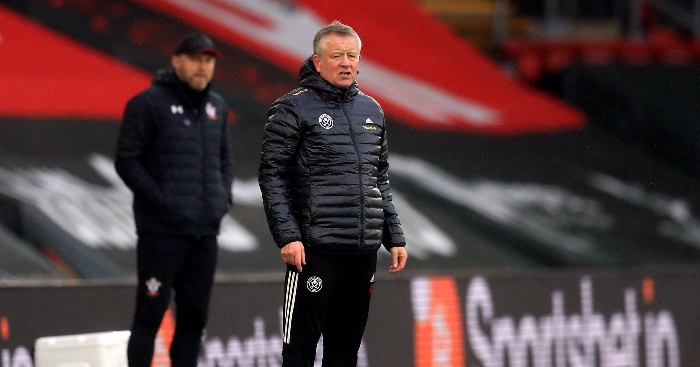 Sheff Utd boss Chris Wilder thinks it ‘wouldn’t be surprising’ if the season was suspended due to coronavirus.

There have been calls from some in the Premier League to introduce a two week ‘circuit break’.

That would help to reduce transmission of the virus amongst players and staff, but the negative impacts could also be huge.

Wilder has now provided his stance on the issue. When asked if the season would be completed, he said: “I don’t think anyone would be surprised [if it wasn’t]. Everyone knows the situation and if it gets suspended I don’t think it’d be a surprise.

“But I’ve been consistent with it, I’ve said all the way through that I want to come into work and play games. That’s been our stance and it’s been left with the Government in conjunction with the Premier League, but I personally don’t think anybody would be surprised because it’s just taken off.

“From the fantastic news regarding the vaccine we’ve been hit by a sucker punch straight away in terms of what the new strain is chucking out there. Everybody puts the TV on and it’s the first item on the news, the numbers keep soaring up and rising.

“We’ll just go with what the Government and Premier League have to say and, if it’s the case to carry on, we’ll carry on. But I don’t think I’m being controversial if I say I don’t think anyone would be surprised if we don’t carry on with the way it’s sweeping through the country.”

The Blades have been impacted badly recently as numerous players have sent back positive tests. When asked if those players might be available against Newcastle, he said: “We’d like to think some of those will. It’s touch and go on a couple.

However, they also gained a boost on Saturday by picking up their first win of the season.

Jayden Bogle scored the winning goal as they beat Bristol Rovers in the FA Cup, giving Wilder his 100th win as Blades boss.

They play Newcastle tomorrow evening at 18:00 in the Premier League.