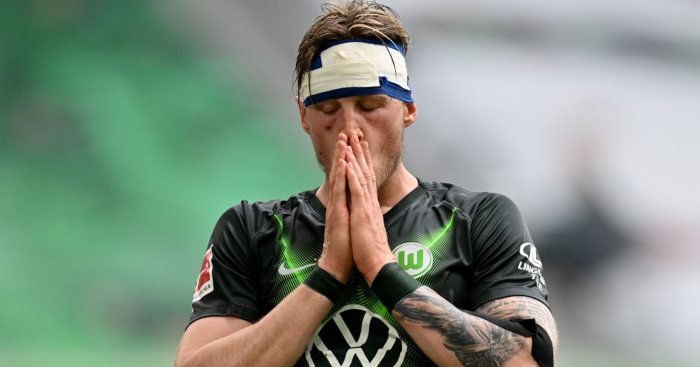 Wolfsburg striker Wout Weghorst has laid out his ambitions to play at the “highest level” amid rumours that Arsenal want to sign him.

Reports claim the Gunners are keen on signing the 27-year-old, who Wolfsburg value at around £32million.

Indeed, the speculation comes amid uncertainty over the futures of Arsenal’s current strikers. Pierre-Emerick Aubmameyang remains in talks over his future, while Alexandre Lacazette is allegedly a target for Atletico Madrid.

In any case, Weghorst has already admitted that a move to Mikel Arteta’s side forms part of his “perfect” career picture.

And now, speaking to Sport Bild, the Dutchman has reiterated his desire to deliver consistently at a higher level.

“Nobody has to be afraid. It’s good for a club to get a lot of money again after investing in a player,” he said.

“I have ambitions and I want to achieve at the highest level. In the past two years I have been able to show that I can deliver at that level and that there is more to come from me.”

Weghorst has scored 20 goals this term, including 16 in 32 Bundesliga games – averaging a goal every two outings.

The attacker has three years left on his contract, which he said talks to extend have been postponed due to the pandemic.

“We discussed that we should sit down if something exciting came up for me. But because of corona, we have a strange market,” Weghorst said.

“I get a lot of recognition in Wolfsburg, I play an important role in sport and in human terms. I feel good, my family too.

“It is also important to me whether Wolfsburg will do everything possible to win titles in the future, but I have confidence in the sporting leadership.”