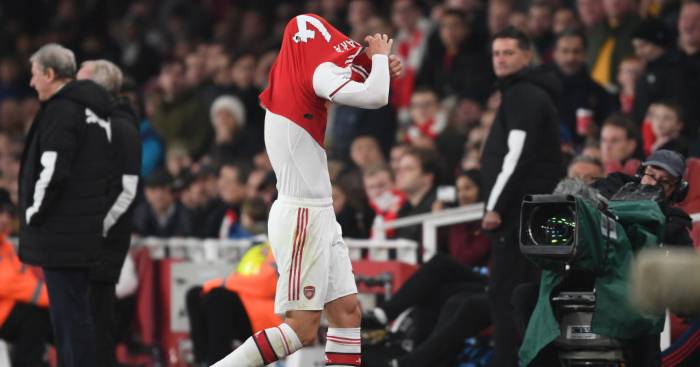 Ian Wright thinks Granit Xhaka “owes” Arsenal fans an apology after his reaction to being substituted against Crystal Palace.

The 27-year-old told Gunners’ supporters to “f*** off” as they reacted to his substitution during Sunday’s 2-2 Premier League draw at home to the Eagles.

The Gunners had flown out of the blocks and were two goals ahead inside 10 minutes as defenders Sokratis Papastathopoulos and David Luiz struck 106 seconds apart.

But the talking point came after 61 minutes as Xhaka, a decisive figure among Arsenal supporters was substituted for Bukayo Saka.

Xhaka‘s withdrawal was initially greeted by large cheers, which soon turned to jeers as he took his time to leave the pitch despite the score being level.

He reacted by waving his arms, cupping his ears and mouthing expletives as he pushed away a handshake from Unai Emery, took off his shirt and headed straight down the tunnel.

“Players getting booed is not the best, but this is the captain,” Wright said on Match of the Day 2.

“They are frustrated that he hasn’t run off the pitch. I’ve seen him before bolt off when he’s substituted. He’s walked off and then he goads them.

“We’re talking about fans who have watched him play a handful of good games in three years. And he’s treating them like that.

“He should apologise. That’s the guy Arsenal have chosen as captain… that’s not captain behaviour.

“Arsenal fans have been patient with him. He owes them a lot more than that.”