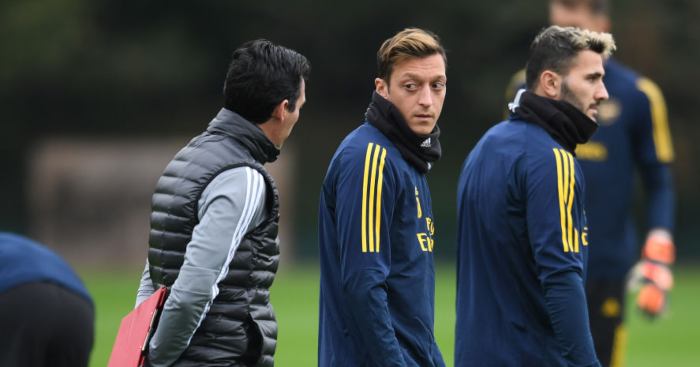 The playmaker has only featured twice for the Gunners this season, but in an interview with The Athletic refuted suggestions he may leave the Emirates any time soon.

Ozil signed a new three-and-a-half year contract worth £350,000 per week in January 2018 which will run until the summer of 2021 and stated recently that he would be “staying until then.”

When asked whether he would like to see Ozil or Emery stay at the Emirates longer, Wright told The Kelly and Wrighty Show: “Well, hopefully Ozil.

“He’s already said he doesn’t want to leave. For me, hopefully it’s Ozil.”

Wright added: “I’m very disappointed to see that [Ozil not in the squad] because I don’t think that Arsenal, when you look at Arsenal’s creative stats, they’re not up there.

“They’re actually not creating as much and they’re conceding more shots on target. So that says to me you need somebody who’s creative to be playing there.

“Mesut Ozil is that guy, I don’t know what’s going on with him and Unai Emery, but for me I think this could be the problem for Unai in the end if Arsenal continue to do what they’re doing.

“They’re waiting for [Pierre-Emerick] Aubameyang or [Nicolas] Pepe, like the other day, to save them. The fact is he should be playing.”