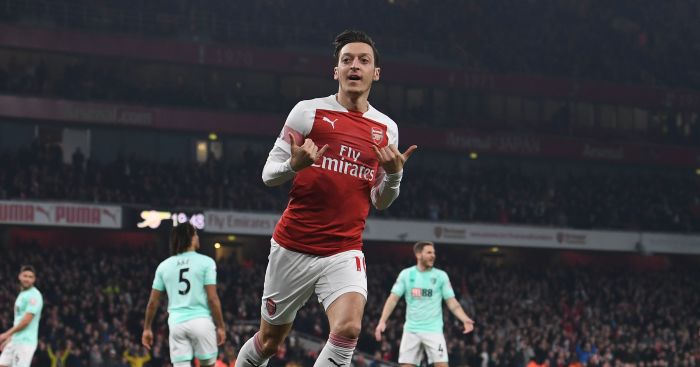 Ian Wright claims he noticed something “brilliant” about Mesut Ozil’s goal celebration during Arsenal’s 5-1 win at home to Bournemouth on Wednesday.

The Gunners eased to victory as Ozil and Henrikh Mkhitaryan shone to keep Emery’s men in the top four.

The pair scored to put Arsenal on course for the win before Lys Mousset pulled one back – only for Laurent Koscielny, Pierre-Emerick Aubameyang and Alexandre Lacazette to strike after the interval.

When you see Ozil’s goal on first viewing it looks like a simple dink over Bournemouth goalkeeper Artur Boruc – but Arsenal legend Wright has explained how he knows it was more complex than that.

Gary Lineker, who presents Match of the Day on the BBC asked Wright: “You’ve noticed something about Ozil’s finishing?”

To which Wright replied: “He kicks down on to the ball. He bounces it on purpose. He did it against Huddersfield and he kicked down on to it against Bournemouth.

“Instead of chipping it over a keeper he bounces it over him. You can see him telling everyone what he did [while celebrating].

“It’s just such a brave finish for someone to do, it’s brilliant. It’s the Ozil.”