Home All The News Wycombe 1-4 Tottenham: Spurs score three late on to advance 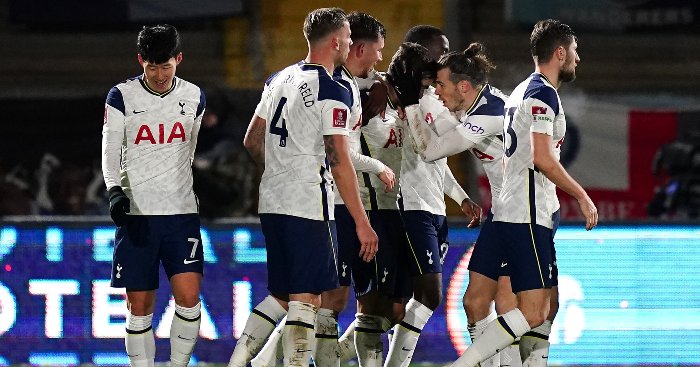 Tottenham were made to work hard for the victory over Wycombe but three late goals sees them through to the FA Cup fifth round.

Ndombele was one of four big hitters called off the bench at Adams Park as Spurs struggled to get the job done against the Sky Bet Championship strugglers playing their first game since a coronavirus outbreak.

A shock was on the cards in the first half when Fred Onyedinma put the Chairboys ahead, but Gareth Bale, playing his first 90 minutes of the season, levelled before the break.

It was one-way traffic after the break, but even Harry Kane and Son Heung-min could not make the breakthrough as Spurs’ frustration mounted.

With extra-time on the cards, Harry Winks broke Wycombe hearts with an 86th-minute curler before two Ndombele goals at the death gave Spurs a deserved win.

𝗙𝗨𝗟𝗟-𝗧𝗜𝗠𝗘 ⏱️ Three late goals send us through to the fifth round of the FA Cup!

It means Jose Mourinho’s men, who play Liverpool in the Premier League on Thursday, are still challenging on all four fronts this season and they now head to Everton in the fifth round.

For Wycombe, who ran out of steam in the second half, they can be proud of their efforts but will now focus staying in the second tier.

Mourinho named a strong team, which included Gareth Bale and this was a chance for him to show why he should be in the team more often. But he fluffed the first line when he missed a golden chance inside the opening five minutes.

The hosts were bright early on as Joe Hart was forced into a smart save to claw away Admiral Muskwe’s header at the near post after Curtis Thompson’s cross.

Bale was presented with another opportunity in the 14th minute, but dragged an effort wide from another good position on the edge of the area.

Those misses proved costly as Wycombe took the lead in the 25th minute.

Uche Ikpeazu got the better of Toby Alderweireld down the right and his cross was not cleared by Davinson Sanchez, who could only divert it into the path of Onyedinma to fire home.

Spurs went for a quick response and the chances continued to rack up. Japhet Tanganga headed over from a corner immediately after, Bale hit the side-netting with another good chance and then Moussa Sissoko’s deflected effort from the edge of the area cannoned into the crossbar.

Mourinho may have been fearing the worst when he saw Tanganga head another golden chance against the crossbar, but his side finally levelled in first-half stoppage time.

Lucas Moura found space on the left and Bale broke the offside trap to hook home from close range.

That ought to have been the platform for Spurs to go on and win the game comfortably in the second half but a raft of missed chances caused unnecessary stress.

Bale was again wasteful after surging into the area, Erik Lamela could not get a proper connection on his shot from a good position and fired straight at Ryan Alsopp and then Moura poked wide after finding space on the edge of the area.

Mourinho was not prepared to risk anything so sent on Kane and Son, but they too were equally wasteful.

Kane saw his shot blocked by Alsopp after miscontrolling and then Son flashed an effort wide after a trademark dart into the area.

You would have put money on Son scoring in the 80th minute but the South Korean blazed over from Sissoko’s pull-back.

It looked like extra-time would be needed before Spurs won it with a two-goal salvo in the space of 72 seconds.

After Kane spurned another chance at the far post, the ball fell to Winks 20 yards out and the midfielder sent a curling effort into the top corner to break Wycombe hearts.

Immediately from kick-off Spurs got in down the left, Son’s shot was deflected into the path of Ndombele and the Frenchman diverted into the bottom corner and he scored a second in stoppage time when he superbly cut inside and fired in at the near post.