Home F365 Features How will Wycombe cope with being a scalp? 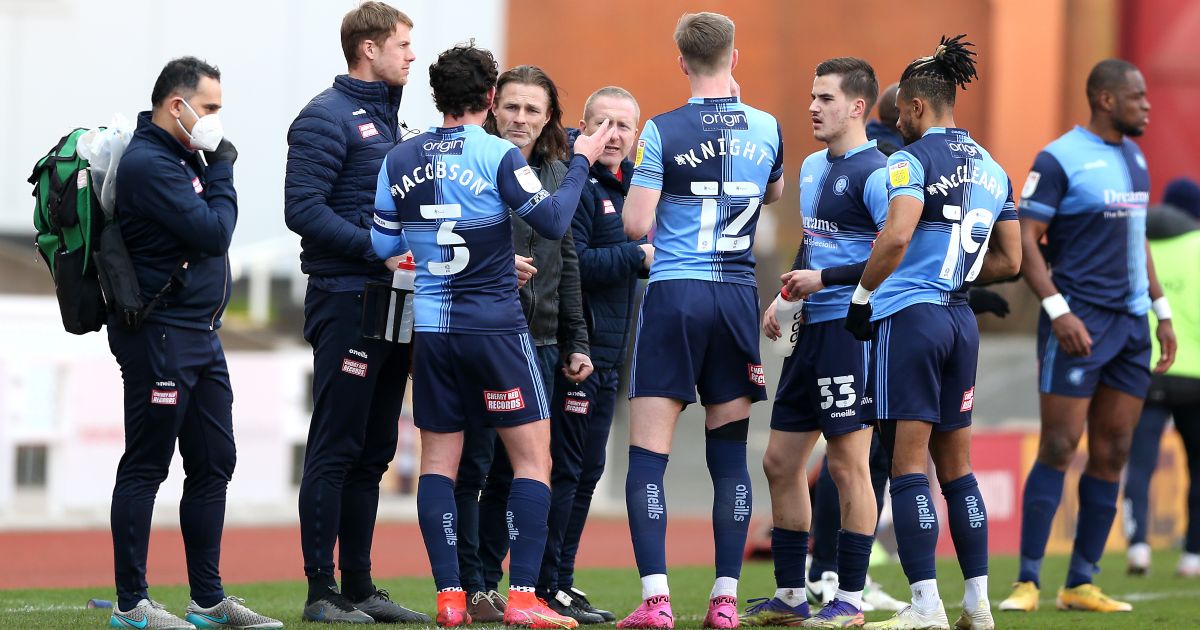 If a team gets promoted and no fans are around to see it, did it really happen? That is the question posed at Wycombe Wanderers as they return to life in League One this summer.

Having achieved promotion to the second tier for the first time in their history with a combination of the Points Per Game system and their own sheer skill and determination in the Covid-hit play-off campaign, Wycombe are now starting back where they left off the last time fans were allowed into Adams Park.

Back in the third tier of English football – with that only just confirmed thanks to Derby County’s reprieve from the EFL – Saturday August 7 will see the Chairboys play host to Accrington Stanley in the first home game with full capacity since a 3-1 win against Tranmere Rovers in March 2020.

If the Prenton Park outfit were one of the most-hard-done-by clubs by the cancellation of football, then Wycombe can certainly be seen as one of its beneficiaries, though there was neither luck nor fortune once Gareth Ainsworth’s side made the Championship.

Having lost their first seven games of the season in what looked likely to be a record-breaking campaign for all the wrong reasons, Wycombe fell just two points short of safety, largely thanks to winning six of their final 11 games.

And the Buckinghamshire side will be looking to carry that momentum into the upcoming season to make an instant return to the top tier of the EFL, with many of the positives from last season still surrounding Adams Park.

Despite spending all but the first week of last season the wrong side of the dotted line, there is so much that is right in the blue chequerboard corner of High Wycombe going into the 2021/22 campaign.

One year ago today.

Top scorer Uche Ikpeazu and star winger Fred Onyedinma have opted to stay in the Championship with Middlesbrough and Luton Town respectively, while goalkeeper Ryan Allsop left at the end of his contract, but the majority of the side had stayed put and looks set to do so.

Largely thanks to manager Ainsworth, a talisman on the touchline, there is a superb atmosphere at the club on and off the pitch despite relegation.

Like fellow relegated side Rotherham United, Wycombe are picking up where they left off the last time football was in a sense of normality. If a club was going to suffer relegation in any season, last season was a good time to do so. Conversely, Brentford could count themselves fortunate to lose to Fulham in the Championship play-off final in the summer of 2020, knowing they would have played their first ever Premier League season largely behind closed doors, instead saving promotion for just as fans were being allowed back into stadiums.

Meanwhile, Wycombe experienced so many highs last season – the first ever win at second-tier level at home to Sheffield Wednesday in early September, February’s defeat of minor rivals Reading, as well as the late-season dual 3-0 away victories over Rotherham and Middlesbrough which oh so nearly secured survival, and Adebayo Akinfenwa’s last-minute winner against Bristol City.

It is fitting that the majority of the key players involved in those great memories largely experienced through stuttering iFollow streams and social media commentary can now play a part in getting Wycombe back to the Championship again, and this time with fans in the grounds to witness it the best way possible – live and in the stands.

The addition of winger Sulley Kaikai from Blackpool adds magic of the promotion variety, as well as being a more-than-able replacement for Onyedinma, while Josh Scowen will be looking to add some midfield solidity which he struggled to do with previous club Sunderland.

Meanwhile, goalkeeper Adam Przybek arrives from League One transfer window winners Ipswich Town, which looks a smart move to share shot-stopping duties with veteran David Stockdale, while key players such as set-piece specialist Joe Jacobson and dynamic young Albanian midfielder Anis Mehmeti will hope to have the same impact as Akinfenwa usually manages on and off the pitch.

Having spent the bulk of the last nine years in charge at Wycombe, Ainsworth is second only to Harrogate Town chief Simon Weaver in the managerial longest-serving stakes. The Chairboys are the only club the 48-year-old has managed on a full-time basis; he is sitting comfortably in his role despite relegation. At no stage of last season were serious questions asked of his future in the not-so-hot seat.

But this season represents something of a fork in the road for Wycombe, and for Ainsworth; the pinnacle for the club and the manager was achieved 12 months ago. Now, it is about making sure that season in the Championship does not go to waste.

The last club of a similar size to spend a solitary season at that level was Yeovil Town, who defied the odds to rise from the non-leagues to the Championship through the late 90s and noughties, and are now back where they began. Wycombe’s rise has been far more consistent and the foundations are there to ensure a drop out of the EFL is unlikely, but the aims could and should be so much higher than that.

That is not to say that an immediate return to the Championship is essential, but Wycombe need not revert to being a yo-yo club between Leagues One and Two. They are not among the big names in the third tier – Ipswich, Portsmouth, Sunderland, Sheffield Wednesday, Bolton Wanderers and Charlton Athletic could all lay claim to being too big for this league on reputation alone – but they have the benefits of Championship experience across the board.

The bulk of the side which finished just one point below 21st-place Derby is still intact, and the addition of another striker to replace the departed Ikpeazu would perhaps make this squad stronger than it was two seasons ago.

But how will Wycombe fare now they are no longer underdogs for perhaps the first time since the 2017/18 League Two promotion-winning season, having finished ninth in the league the season before that?

Still cited by Sky Sports’ advert break as ‘the small club with a bigger heart’ from the scenes after the final whistle in the Wembley heroics against Oxford United, Wycombe must now realise they are no longer small fish in a big pond. The fans were not there to see it in person, but this is a club capable of realising that dream again when it matters even more.

Like fellow relegated sides Rotherham and Sheffield Wednesday, they will be viewed as a scalp in this division, which they have rarely been before. That will take some getting used to, but this Wycombe side have overcome much bigger challenges before and you would back them to do so again.