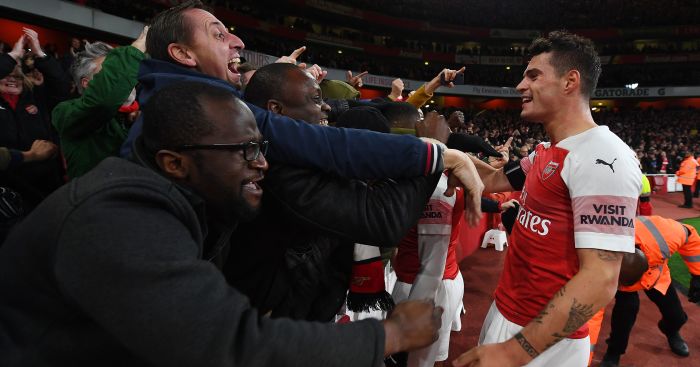 Granit Xhaka reckons Arsenal are equipped to finish in the Premier League’s top four spaces this season and qualify for the Champions League.

There will be some tough competition with Manchester City, Liverpool, Chelsea and Tottenham currently occupying the top four, while the fifth-placed Gunners are ahead of Bournemouth and Manchester United by three points.

However, Xhaka thinks that their performance in the 1-1 draw against Liverpool on Saturday shows that they are “ready” for a top four finish.

“Each game we know what we do,” Xhaka said. “We know the opposition well, where they are good and where they are not. He (Emery) is important. He helps us, not only me but all the players, with the small things. The tactical things. You can see that on the pitch.

“A lot of small things have changed. We have great character. If you are 1-0 down for example against Liverpool, we come back and it’s not the first time.

“We knew we would not lose this game because we were so good and showed that character again. If you see this game, you can see we are ready for the top four.”

On his new team-mate Lucas Torreira, Xhaka added: “Every game is better and better. He is so important. He knows when to go and when to stay. He brings good balance between offence and defence.

“I think we can be happy with our performance. We know Liverpool have a good team but we gave everything and we showed a great game. In my opinion we were the better team.”