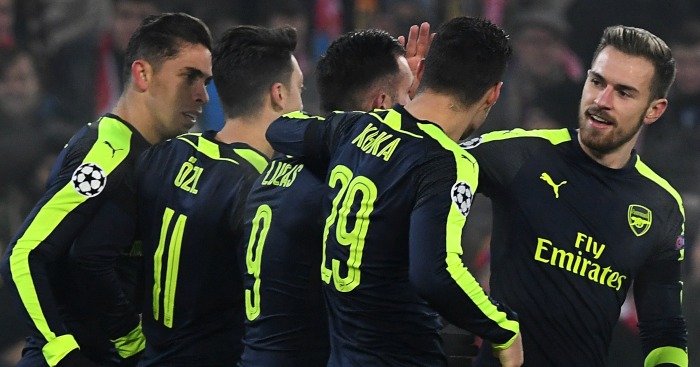 “His strength is what we call the ‘moderate-value pass’,” said Arsene Wenger when asked to describe Granit Xhaka’s greatest asset, needlessly complicating what is in essence the Swiss midfielder’s ability to find his attacking midfielders with pin-point passes. Against Basel that wasn’t enough; he had to be chief cook and bottle-washer too. Such is life in central midfield with Aaron Ramsey.

This was Arsenal’s eighth central midfield pairing of the season, with Ramsey named as Xhaka’s fourth partner after Francis Coquelin, Santi Cazorla and Mo Elneny. A simple tally chart suggests that Cazorla/Coquelin and Elneny/Coquelin are Wenger’s preferred options; Arsenal’s most expensive central midfield purchase is still trying to gain a foothold.

That foothold should look a little firmer after a night in which he was exposed by Arsene Wenger’s decision to field Aaron Ramsey, who appears to see central midfield merely as a platform from which to spring into his favourite role – as seen in Wales’ Euro 2016 adventure – as wanderer-in-chief. Left, right, on the toes of Mesut Ozil; against Basel, Ramsey was everywhere but in central midfield.

“Granit Xhaka is often very lonely in that midfield,” said Martin Keown as Ramsey too often decided that Kieran Gibbs (playing excellently as a faux winger), Alex Iwobi, Mesut Ozil, Alexis Sanchez and Lucas Perez needed company further up the pitch. Poor Xhaka was left to have more touches, pull off more tackles and interceptions and of course commit more fouls than any other player on the pitch. The Gunners contrived to win 4-1 and yet still look porous in central midfield.

On a night of wonderful positives – Perez displaying his finishing ability, Gibbs proving there is life in the old left-back yet, Rob Holding and Gabriel looking largely competent in a makeshift defence, a first unbeaten Champions League group campaign in 11 years, topping the group against all odds – the one real area of weakness for Arsenal was in central midfield. And that was absolutely not the fault of Xhaka, who battled valiantly to do the job of two. The first outing of this combination should also be the last.

Xhaka and Ramsey are indisciplined in different ways. Xhaka in his tackling, Ramsey in his positioning. It's a beautiful trainwreck

This was a combination Arsenal fans have been waiting all season to see and, viewed simplistically, a 4-1 win looks like vindication for both excitement and selection. But Basel were poor and yet at times advanced as far as the Arsenal penalty area relatively unchallenged. Where was Ramsey? Jogging back from his foray onto the left wing. Where was Xhaka? Sticking out a leg and hoping Santi Cazorla would hurry up and get fit.

We have described this Arsenal squad as possibly the strongest since the Invincibles season and yet the Gunners have tried eight different central midfield combinations and are yet to find one that really works. Or at least one that really works and is currently available. The astonishing talents of Sanchez and Ozil, the option of Olivier Giroud and the burgeoning partnership between Shkodran Mustafi and Laurent Koscielny have all masked the fact that they are still searching for a central midfield solution.

Xhaka’s performance on Wednesday night suggests that the solution should include his name. Just don’t put it alongside that of the Welsh wanderer.