Home Arsenal Xhaka can…so why not let him try? 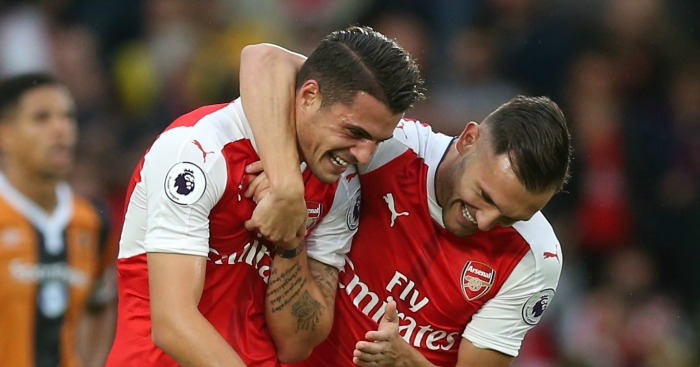 “For me it’s about pairs as well, who work together. Coquelin and Cazorla have worked well together,” said Arsene Wenger on Friday, so it’s a mystery why anybody at all was surprised when Granit Xhaka started his third straight game on the bench. And nobody should be surprised if Xhaka is benched again next week against Chelsea, presumably after a little midweek run-out in the League Cup. Because of course every fan wants to see their new £35m signing in the League Cup.

Quite how Xhaka is supposed to form a fine pairing with anybody when he comes off the bench for 25 minutes is anybody’s guess; presumably he has been put next to fellow new(ish) boy Mo Elneny in lessons and they’re passing notes about how on earth they can break up Coqorla when Coqorla are allowed to look imperious in 4-1 cruises against Hull in which Arsenal dominate the ball, they barely play an errant pass between them and the Gunners can afford to miss a penalty and still end the game with their hats at a jaunty angle.

Never mind that in midweek against PSG, Francis Coquelin did not make one successful tackle and committed three fouls. Never mind that against Hull, Santi Cazorla somehow repeated that trick despite the Tigers barely having the ball, it has been a successful week for the Gunners: they have picked up a point in their most difficult Champions League fixture and a third straight Premier League victory for the first time since Christmas. And yet they are still 14/1 outsiders for the title (double the odds of Liverpool) because few people believe they have got significantly better.

There was much to admire in Arsenal’s win at Hull but victory – the sharpness and guile of Alex Iwobi and Alexis Sanchez, most notably, and then of course the wonderful strike from Xhaka – but against a limited side reduced to ten men, the Gunners should not be missing half their tackles. Those who believe that the Swiss midfielder is not yet disciplined enough for English football, might want to watch Cazorla almost get sent off against Hull because his little legs can never quite move fast enough not to hack down younger, faster players. As for Coquelin, his tackling statistics compare unfavourably with those of Jordan Henderson this season, and only one of those players is supposed to be a specialist.

Of course the partnership between Coquelin and Cazorla works. To a certain extent. They were excellent in the second half of the 2014/15 season when Arsenal desperately needed a sticking plaster. But they still lost at Tottenham and were then outclassed by Monaco in the Champions League. They were decent in the first half of the 2015/16 season but they were partly culpable for the mess that was their Champions League campaign, looking particularly poor against Olympiakos. Wenger has placed his faith in an axis that has been relatively successful but is also clearly flawed. See the ludicrous spectacle of Coquelin attempting to be the link between midfield and attack in Paris for evidence.

It’s not that Wenger has placed his faith in a poor midfield axis, but that we have to presume that he has spent a considerable amount of money on Xhaka because he strongly believes he is an upgrade. Having spent years chastising him for his reluctance to acknowledge that his players could possibly be replaceable, it’s frustrating to see him buy a new car only to keep it in the garage because the old one works just fine. Put your foot down, Arsene.