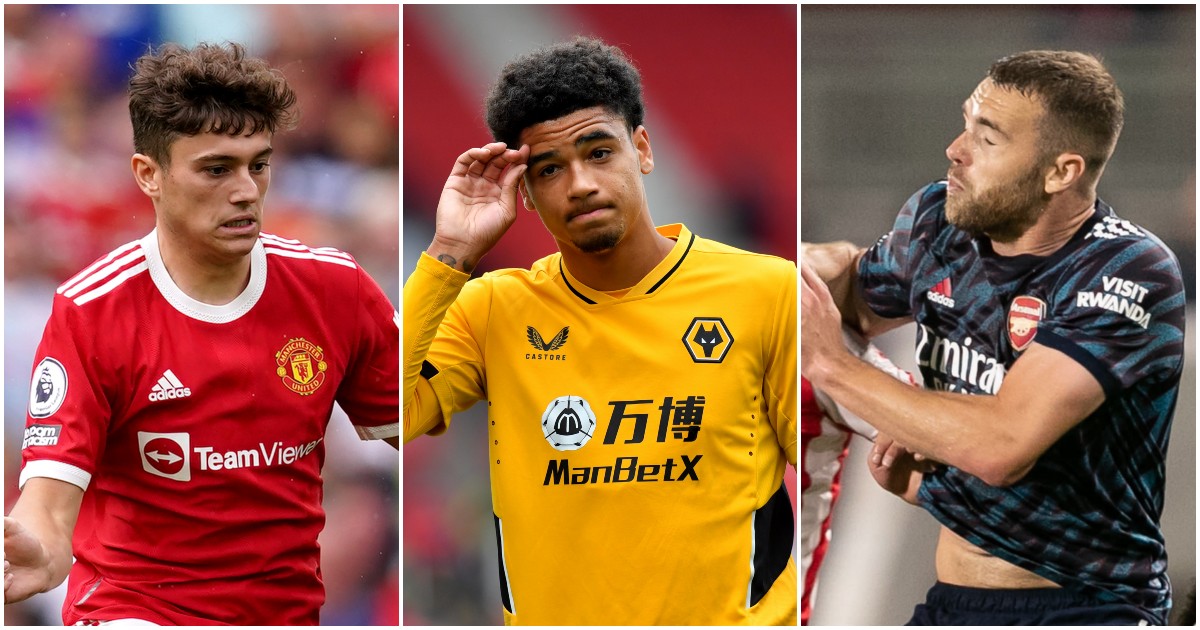 The opening Premier League fixtures will be reversed this weekend. Some of those early starters were bizarre, with Arsenal a real standout.

GOALKEEPER: Bernd Leno (Arsenal)
At the time it was perhaps the least remarkable aspect of the line-up Arsenal named to face Brentford on the opening weekend. Bernd Leno had started 96 of the Gunners’ previous 107 Premier League games, dethroning Petr Cech at the beginning of the 2018/19 season, seeing off the challenge of Emiliano Martinez at the end of the 2019/20 campaign, handing Mat Ryan some meaningless appearances in 2020/21 and retaining his place despite the arrival of Aaron Ramsdale in August. While Mikel Arteta had myriad issues to deal with, his goalkeeping situation was not one.

But in retrospect, it seems like a glitch in the Matrix. Leno understandably floundered at the Brentford Community Stadium, being forced into an impromptu and unpunished piggy-back of Pontus Jansson for Christian Norgaard’s clinching goal. The German international was entrusted for two more games – a 2-0 defeat to Chelsea and 5-0 thrashing at Manchester City – before Ramsdale took the gloves. Outside of the FA Cup and early rounds of the League Cup, Leno has not been able to wrestle them back and will leave Arsenal this summer.

Aaron Ramsdale has the highest clean sheet percentage in the Premier League this season (minimum 10+ games).

What a signing for Arsenal. 👏 pic.twitter.com/G5nqagLit0

RIGHT-BACK: Ki-Jana Hoever (Wolves)
“It wasn’t an easy choice, but it wasn’t that hard either,” said Ki-Jana Hoever last March. “I knew my playing time would be more than at Liverpool, that’s why I made the decision. I thought it was the best thing for my career in the moment.”

The Dutch defender was not wrong. After starting four games with a total playing time of 346 minutes across almost two years in the Liverpool first team, Hoever has made 23 appearances since joining Wolves in September 2020. The problem is that only eight of those matches have come under Bruno Lage, who claimed to “trust a lot in Ki” this month but is not translating that into many opportunities. The 20-year-old was even overlooked for selection in the FA Cup as the improved Nelson Semedo was selected in the third and fourth rounds instead. Hoever did start in the opening weekend loss to Leicester, with his only other seven-minute-plus Premier League appearance this season coming against Chelsea in December. Liverpool sold him for £13.5m, helping to offset the £41m Diogo Jota fee. They’re good at this.

CENTRE-BACK: Calum Chambers (Arsenal)
A slight cheat as Calum Chambers was entrusted at right-back for those chastening 90 minutes at Brentford, but half of his four games for Arsenal this season came in the centre of defence. A goalscoring substitute cameo helped beat Leeds in the League Cup, while Manchester City stuck five past a backline of Cedric Soares, Rob Holding, Chambers, Sead Kolasinac and Kieran Tierney in August. So he can fill in and do a job for this entirely serious, Championship-bound XI.

Chambers generally escaped specific censure for his performance as the combined team display attracted the most opprobrium. ‘I like handsome Cal, but I don’t know that him starting the season at right back is great squad building,’ wrote the esteemed Arseblog in some suitably scathing player ratings. Arteta appeared to agree, shipping the 27-year-old out for nothing when Aston Villa came calling in January.

CENTRE-BACK: Pablo Mari (Arsenal)
Completing the Arsenal set from a team that also featured Folarin Balogun, the lesser-seen Nicolas Pepe and even Reiss Nelson from the bench, the presence of Pablo Mari in West London summed up the issues that quite literally plagued the Gunners at the start of the season.  Arteta was “surprised it wasn’t postponed” after Pierre-Emerick Aubameyang, Alexandre Lacazette, Willian and Alex Runarsson were ruled out with Covid, every player and staff member had to test on the day of the game and Thomas Partey, Eddie Nketiah and Gabriel had already been sidelined through injury.

Considering the low bar many clubs ended up clearing to have games called off, you can see his point.

Mari and White were subject to the highest of presses against Brentford, the former at one stage panicking and hoofing the ball clear under pressure before letting out an audible “Bernd, f**king hell” as Leno failed to offer him a passing option. The appearance even reportedly triggered a €1m payment from Arsenal to Flamengo as it was the Brazilian centre-half’s 20th game for the Gunners; he played twice more before joining Udinese in January.

LEFT-BACK: Kostas Tsimikas (Liverpool)
Liverpool’s continued presence in four competitions by late February at the very least has granted Jurgen Klopp the ability to spin more plates than usual in terms of squad rotation. Thirty-seven players have made an appearance for the Reds this season, including blatant Football Manager regens Elijah Dixon-Bonner, Harvey Blair and Melkamu Frauendorf, with Kostas Tsimikas sitting snugly in between Ibrahima Konate and Curtis Jones in terms of minutes played. The Greek Scouser is even above Thiago, Naby Keita and back-up left-back spirit animal James Milner.

Those games have been spread pretty evenly: three in the Champions League, three in the League Cup and two in the FA Cup have provided the foundation for nine Premier League matches, of which six were starts. The most recent was in that enthralling draw against Chelsea to open the year; the first was an unspectacular showing in a routine win over Norwich.

In the first window after Liverpool won the league – when the club apparently didn’t strengthen – they signed Jota, Thiago and Tsimikas.

CENTRAL MIDFIELD: Jairo Riedewald (Crystal Palace)
Jairo Riedewald spoke of “a great opportunity to be working under Frank de Boer once again” when he joined Crystal Palace in summer 2017; “the gaffer” was sacked 49 days later. Roy Hodgson found a semi-regular place for the midfielder between injuries but the cultured, 20-year-old Netherlands international who moved to Selhurst Park has become a bit-part 25-year-old under Patrick Vieira. Riedewald has played just four times for the new manager, getting two minutes to impress in the FA Cup and being brought on as a substitute in Premier League defeats to West Ham and Liverpool. He might have expected a little more, having been given the nod at Stamford Bridge in August. Perhaps a timid 3-0 defeat to Chelsea did not particularly help his case.

CENTRAL MIDFIELD: Isaac Hayden (Newcastle)
The Newcastle that started the campaign is not the same as the current iteration. Eddie Howe, a sovereign wealth fund and excitement have replaced Steve Bruce, Mike Ashley and misery, with Bruno Guimaraes expected to similarly displace Isaac Hayden in time.

For five years, Hayden was a Magpies midfield mainstay who irregularly flirted with England selection in the same way Grant Holt used to. As late as December, the 26-year-old was starting consecutive Premier League games – and predictably heavy defeats – to Liverpool and Manchester City. He played ten of the first 11 games of the season. But his outlook is considerably bleaker now: while a knee injury was scheduled to sideline Hayden until around March, his omission from Howe’s Newcastle squad for the rest of the season will elongate that wait. By the time he is available for selection again, Guimaraes should be up to speed, Joelinton will likely have established himself as the best midfielder in Europe and the market will be open for Newcastle to flex their financial muscle once more.

CENTRAL MIDFIELD: Dele Alli (Tottenham)
Much like those first few weeks of Jose Mourinho, when the Portuguese seemed to coax a different level of performance out of Dele Alli by outright calling him lazy and wondering whether it was actually his brother in disguise, the erstwhile England international enjoyed a dawn  false enough to reel in many under Nuno Espirito Santo. Alli did not astound in a midfield three against Manchester City but showed brief glimpses when deployed slightly deeper for that 1-0 August victory. It did not last – and that brief new manager bounce never even really came to fruition with Antonio Conte.

Alli played six times for the Italian before being moved on in January as one of “four important players for Tottenham” who were let go; no wonder Conte seems so frustrated. Everton got him for nothing, which some might say was a rip-off.

RIGHT WING: Todd Cantwell (Norwich)
“It’s easy for people externally to look at the situation and basically guess at what’s happened and look at it and take what they want,” said Todd Cantwell of his peculiar plight at Norwich, which presumably came about when he got an Ipswich tattoo or suggested Josh Sargent was the club’s greatest player ever or something. One of the few silver linings to that dark relegation cloud of 2019/20, Cantwell continued to be favoured for most of their Championship promotion campaign but some of the seeds had already been sown for his ostracisation. That sense of stagnation under Daniel Farke remained by the time Dean Smith was appointed.

Cantwell started five Premier League games for the Canaries before joining Bournemouth on loan in January: three in August, one in September and another in December. Ninety minutes in a 3-0 defeat to Liverpool did little more than remind everyone how recently he had been linked with moving to the Reds before things went awry.

LEFT WING: Daniel James (Manchester United)
Leeds have a peculiar relationship with Daniel James. A £10m move to Elland Road was agreed for the Swansea winger in January 2019, with interviews and announcement photoshoots completed, only to fall through in the closing stages. He joined the West Yorkshire club eventually, two-and-a-half years later and 17 days after he terrorised them one final time.

James scored in a 6-2 win for Manchester United over Leeds in December 2020, then sprinted himself into the ground against a particularly patchy version of Marcelo Bielsa’s side last summer. Home supporters at Old Trafford did not expect to start their assault on the Premier League title with James in the starting line-up and Jadon Sancho on the bench; within a fortnight, the Welshman would be effectively swapped for Cristiano Ronaldo and literally everything has been perfect for them ever since.

CENTRE-FORWARD: Ferran Torres (Manchester City)
That month or so during which a unanimous agreement was reached over Ferran Torres being Manchester City’s ideal centre-forward for the future was weird. The Spaniard started the club’s first four Premier League games of the season and looked excellent. He then dropped to the bench for the next three matches as Raheem Sterling, Phil Foden and Jack Grealish shared the false nine role before October’s international break. Torres knackered his metatarsal in that time and would not be seen again in sky blue, his move to Barcelona being both sudden and protracted. Manchester City obviously more than doubled their initial outlay on a player most had forgotten they still had.