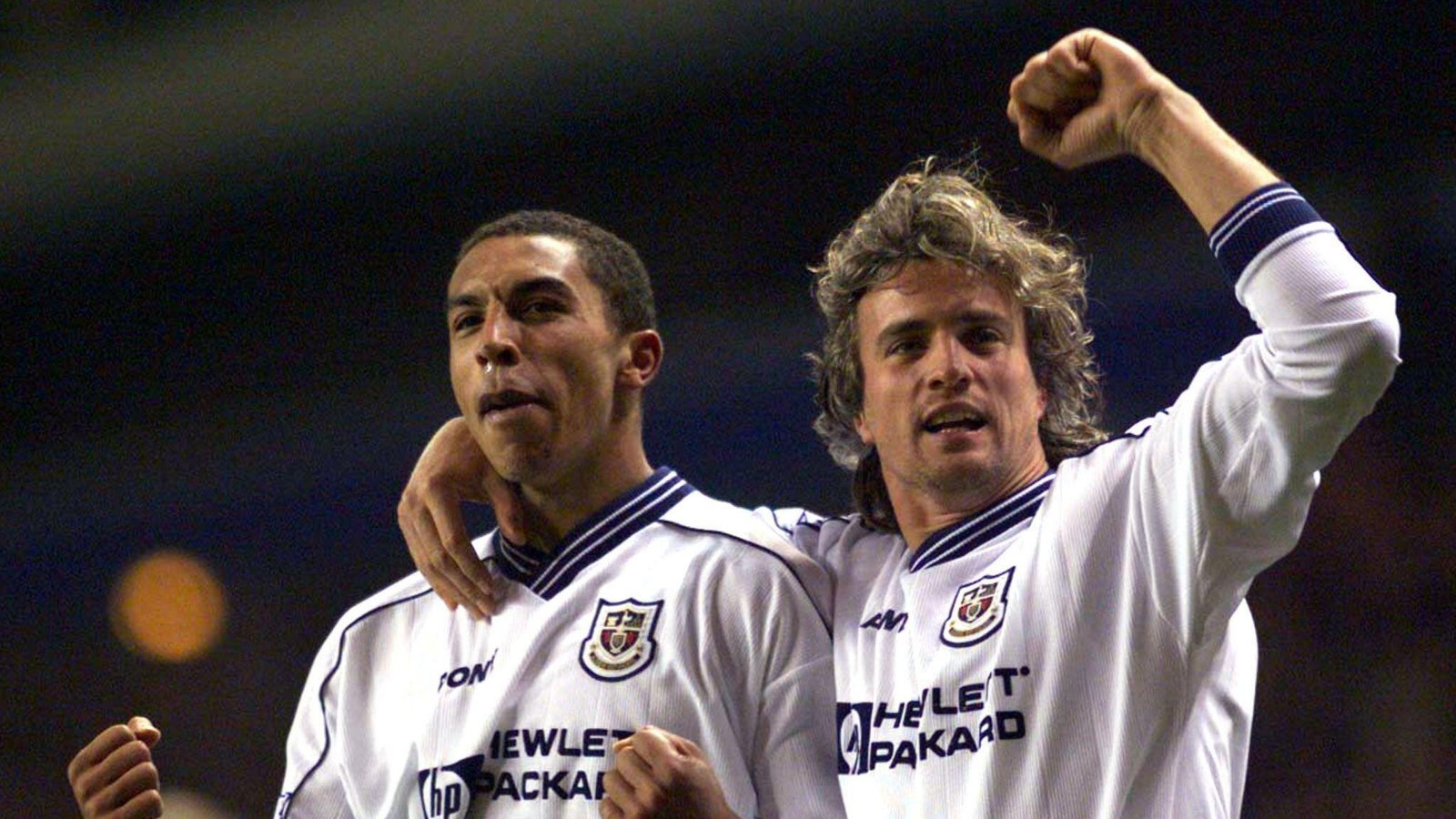 Man City and Liverpool have a chance to further their respective Treble and Quadruple hopes when they meet. This XI ended them in the past.

Liverpool and Manchester City clash at the Etihad on Sunday, with the winners gaining the upper hand in the race for the Premier League title. Jurgen Klopp is gunning for an unprecedented Quadruple, while Pep Guardiola is hoping to lead his team to the Treble. With both teams looking set to reach the last four of the Champions League and the two sides also meeting in the semis of the FA Cup, it promises to be a thrilling week. Here’s an XI made up from players who helped to stop sides who could’ve won a Treble or Quadruple.

Goalkeeper: Fabian Carini
Twenty years ago, Arsenal claimed a third Double after going on a 13-game winning streak to clinch the league title and beat pre-Abramovich era Chelsea in the FA Cup final. However, a maiden Champions League crown evaded the Gunners as they crashed out of the competition in the much-maligned second group phase. Arsene Wenger’s men faced Juventus in the final match and as the Bianconeri had already been eliminated they fielded a weakened team. But back-up keeper Fabian Carini made the most of a rare start, saving a Thierry Henry penalty to keep the match at 0-0, before a late Marcelo Zalayeta goal ended Arsenal’s Treble chances. If you fancy a goalkeeper challenge, try naming the Deportivo keeper who saved a penalty from Henry a week before the Juventus game.

Centre-back: Gerry Ryan
Versatile Irishman Gerry Ryan will have to a do a job at centre-back for this side, with the former Brighton man playing a part in halting Liverpool’s bid for a Quadruple in 1984. Ryan also found the back of net in 1983 to help the Seagulls knock out the Reds en route to the FA Cup final and despite suffering relegation in the same year, the south coast side proved to be a thorn in Liverpool’s side as a second-tier team, with Ryan scoring again as Joe Fagan’s men exited the cup in the fourth round. It proved to be the only blot on their campaign: the Anfield faithful went on to watch their heroes lift the First Division title, League Cup and European Cup.

Centre-back: Daniel Agger
Chelsea’s 2011/12 season will be remembered for a remarkable run to the Champions League final and the big-game heroics of Didier Drogba that helped the Blues to an unlikely triumph in Europe. Caretaker boss Roberto Di Matteo had already guided his players to FA Cup glory against Liverpool – a victory that contained an element of revenge. Kenny Dalglish’s team were the only side in the Premier League to do the double over Chelsea that year, with Daniel Agger scoring in a 4-1 win for the Reds in May, denying the Stamford Bridge outfit a chance at making the top four.

Centre-back: Phil Jagielka
Ten years after their Treble triumph in 1999, Manchester United looked to be on course for going one better after beating Tottenham on penalties in the 2009 League Cup final. Despite leading his side to a Champions League final for the second year in a row and adding another Premier League title to his vast collection, Sie Alex Ferguson was left furious after watching his players blow their Quadruple chances following a penalty shootout defeat to Everton in the semis of the FA Cup. Phil Jagielka converted the winning spot-kick and to make matters worse for United, the Everton defender had earlier gotten away with what looked to have been a clear foul on Danny Welbeck in the box.

Right-wing: Kai Havertz
Last year it was the blue side of Manchester gunning for a Quadruple but Chelsea twice thwarted Pep Guardiola’s lofty ambitions. The League Cup and the Premier League crown both ended up at the Etihad but defeat in the FA Cup semis to Thomas Tuchel’s men was followed up by a loss in Europe to the same side. Kai Havertz scored the only goal in Porto as Manchester City came out second-best in their first Champions League final, while the result also extended Guardiola’s drought in the competition to ten years.

Central midfield: Jimmy Greenhoff
If Liverpool can defeat Manchester City on Sunday and find a way past the Citizens in their FA Cup clash the following weekend, Manchester United will be the next obstacle facing Jurgen Klopp in the hunt for the Quadruple. The Red Devils will be out for revenge after their 5-0 humbling at Old Trafford earlier in the season and they have previous when it comes to denting trophy aspirations at Anfield. 1977 saw Liverpool lift the first of their six European Cups and Bob Paisley also guided his side to a league championship. However, defeat in the FA Cup final prevented a then-unprecedented Treble, Jimmy Greenhoff scoring the winner for Manchester United in a 2-1 win for Tommy Docherty’s side.

[OTD] 1977 – Jimmy Greenhoff scores the winner as United beat Liverpool 2-1 to win the FA Cup for a 4th time. pic.twitter.com/EIW3ok3Gwr

Central midfield: Sulley Muntari
Ferguson was on the hunt for a second Treble in 2008, with Chelsea finishing the season as runners-up to Manchester United in the Premier League and Champions League. The Red Devils memorably defeated the Blues on penalties in Moscow to clinch a third European Cup win, but a spot-kick ended their FA Cup chances at the quarter-final stage. Eventual winners Portsmouth secured the shock win after Milan Baros was fouled by Tomasz Kuszczak in the box, which led to the Polish keeper receiving his marching orders. Sulley Muntari then smashed the ball past stand-in keeper Rio Ferdinand to send Pompey to the semis at United’s expense.

Left-wing: David Ginola
Manchester United’s thrilling Treble-winning story in 1999 was famous for dramatic turnarounds at home and abroad but a quarter-final tie against Tottenham in the League Cup proved to be the one time the Red Devils couldn’t snatch victory after going behind. Ferguson selected a weakened side and Spurs took full advantage, running out 3-1 winners. French winger David Ginola was at his imperious best, setting up Chris Armstrong for a goal before sealing passage to the semis with a superb long-range strike that killed off any chance of a trademark comeback.

Striker: Kubilay Turkyilmaz
After winning the inaugural Premier League title in 1993, the following campaign marked Manchester United’s first foray into Europe’s premier competition for over 20 years. Unfortunately for Ferguson’s men it was a short adventure, the Red Devils going out to Turkish champions Galatasaray in the second round on away goals. Swiss international Kubilay Turkyilmaz bagged a brace in a 3-3 draw at Old Trafford to end any hopes United had of a clean sweep that season. However, a historic Double was completed come May and a domestic Treble was a whisker away after defeat to Aston Villa in the League Cup final.

Striker: Samuel Eto’o
Real Madrid manager Carlo Ancelotti has put a huge dent in Chelsea’s hopes of retaining the Champions League this year but back in 2010, the Italian was masterminding the Blues to a domestic Double in his first season at Stamford Bridge. Reigning champions Manchester United were pipped in the race for the Premier League, while relegated Portsmouth lost out in the FA Cup final. However, Inter Milan dashed any dreams of a hat-trick of trophies in the Champions League round of 16, with the Nerazzurri guided to their own Treble by former Blues boss Jose Mourinho.

Striker: Fernando Llorente
A clean sweep of all the domestic trophies available to Manchester City in 2019 meant that a maiden win in the Champions League would’ve made it the most successful season any English side has ever had. However, a memorable quarter-final clash with Tottenham ended up with the Citizens crashing out on away goals after a bonkers second leg at the Etihad. Fernando Llorente scored the decisive goal after a check for handball was completed and more VAR drama was to ensue following a decision to rule out a late Raheem Sterling strike for offside.