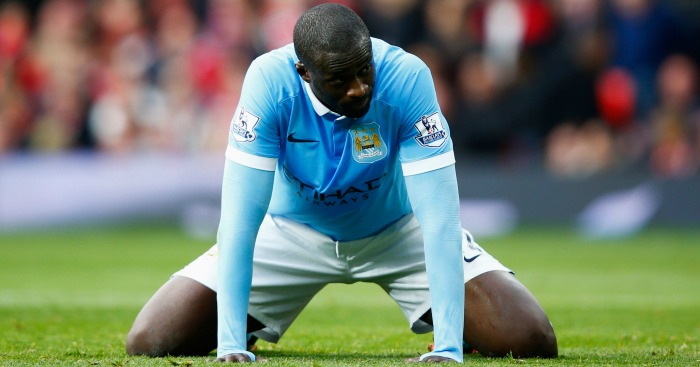 “Seluk must apologise. If he doesn’t, Toure won’t play.”

Pep Guardiola had ensured that his message could not be misinterpreted. The Spaniard has wasted little time in asserting his command throughout Manchester City since his appointment as manager. There will be no mixed messages from the sole figure of authority; players are expected to fall in line. Importantly, reputations would not be considered – just examine the differing fates of Joe Hart and Aleksandar Kolarov. Player agents, those most likely to threaten such an arrangement, would not exist in an ideal world.

Three months into a reign which has started with perfection on the pitch, the self-serving, destructive dealings of one outside influence provides a souring subplot. Dimitri Seluk’s actions and words have not threatened the run of nine successive victories which has underpinned Guardiola’s revolution, but they do promise to taint the legacy of a man whose role in shaping Manchester City’s past, current and future should never be underplayed. The manager has demanded an apology from Seluk, but he will not expect to receive one.

It is not the first time that Yaya Toure’s troublesome agent has placed his client firmly between a rock and a hard place. Even before the Ivorian arrived at the Etihad Stadium in summer 2010, Seluk had clashed with Guardiola at Barcelona. The Ukrainian’s constant demands for his player to receive a pay rise and increased playing time was met with derision from Barcelona’s manager. At one point, the typically calm Guardiola snapped. “Are you a man?” he asked of Toure. “Who is in charge? You or the agent?”

For Guardiola’s predecessors in Manchester, Seluk was just as abrasive and difficult. On numerous occasions the agent has threatened that Toure will leave the club if he continues to feel underappreciated. The summer of 2014 saw the agent at his nefarious worst. “City have treated him with disrespect and have really hurt him,” he told The Sun. “There are a number of things that have happened that have left Yaya feeling bitterly upset.” Seluk would go on to detail City’s crimes, which included the infamous claim of how the club had failed to present Toure with a cake on his birthday.

Instantly, a key figure in Manchester City’s recent success was reduced to little more than a running – or jogging – joke. ‘Birthday boy Yaya is a laughing stock,’ wrote the Daily Star. The Daily Express went with a headline of ‘A TOURE DE FARCE’. Eamon Dunphy’s words were the most damning. “An obvious waster,” he said in March 2015. “Won’t work. Complaining about a birthday cake he didn’t get last summer after they won the championship.” Whether true or not, Seluk’s accusation had stuck.

And the legitimacy of the agent’s claim really ought to have been challenged more often than it has been. ‘The player himself had never even mentioned the issue before it was pushed to the forefront by an agent eager to create a scene,’ wrote Sam Wallace of the Daily Telegraph. Toure himself tried to play peacekeeper. “There was a lot of speculation about birthday cakes and rubbish like that,” he said in September 2014. “It was disappointing for me because a little joke is becoming serious.” But the damage was already done.

It is a massive injustice that his legacy has been tainted in such a manner, not least by his own agent; this is not how we should remember Toure. At one stage, the Ivorian was the most dominant footballer in the Premier League, boasting a combination of skill, poise and explosive power like no other. City had struggled to attract the world’s elite players to Manchester since their takeover in 2008, but Toure changed that. He transformed the club, bringing with him a winning mentality, an undoubted class, an aura. City have won six trophies this decade, and each are covered in Toure fingerprints. He scored decisive goals in the 2011 FA Cup semi-final and final; he was named in the Premier League 2011/12 PFA Team of the Year; he was man of the match in the 2012 Community Shield; he scored a remarkable goal in the 2014 Capital One Cup final against Sunderland; he scored the winning penalty in the same tournament two years later against Liverpool.

It was two seasons ago that the football world witnessed Toure at his peak. The midfielder was incredible, the literal driving force behind City’s second title victory in three seasons. Luis Suarez was afforded the headlines for his exploits at Liverpool, but he was not the man who held the Premier League trophy aloft come May. Instead it was Toure, and his 20 goals from midfield. It is often forgotten just how imperious he was, how often he dominated games single-handedly, how he gift-wrapped and delivered a title to Manuel Pellegrini. The sheer ease with which he glided through games led to descriptions of a languid, even lazy genius. It was always an unfair tag for a man whose biggest crime was looking effortless, not lacking effort. The Daily Telegraph placed him 19th in their rundown of the 100 greatest ever Premier League players; he did not look out of place in between Suarez and Tony Adams.

Toure’s performances have dipped drastically since, and understandably so. Now 33, he can no longer dictate games as he used to. He has played over 650 career matches in an area of the pitch where stamina is a prerequisite. Toure’s on-pitch nadir came last season in the Champions League semi-final, where he encapsulated City’s sleepwalk to defeat against Real Madrid. It signalled an inconspicuous end to his reign of dominance.

And yet his reputation remained intact, at least until Seluk’s latest missive. City still owe a huge debt of gratitude to Toure, who has arguably been more influential in their development than Sergio Aguero, more important in their progress than David Silva, more vital to their success than Vincent Kompany.

There is a danger that the Toure quite incredible exploits on the field will be forgotten. He is tarred with the same brush as Seluk, a man he is being implored by many to sack, but who he considers as a second father. Torn between the club he considers his home and the man who he named his eldest son after, it is an unenviable position for Toure to be in. His dignified silence throughout the controversy should be noted.

It is intrinsically sad that Toure could be remembered for anything other than just how superb he was at his best. “If Pep Guardiola wants a war, then he can have one,” said Seluk earlier this week, but the agent is posing a far bigger threat to his client’s legacy than he is the Manchester City manager’s reign. Guardiola cannot be blamed. If, in years to come, Toure is synonymous with birthday cakes instead of his brilliance, Seluk will be responsible. His ego has betrayed Toure, the man who once ruled the Premier League roost.