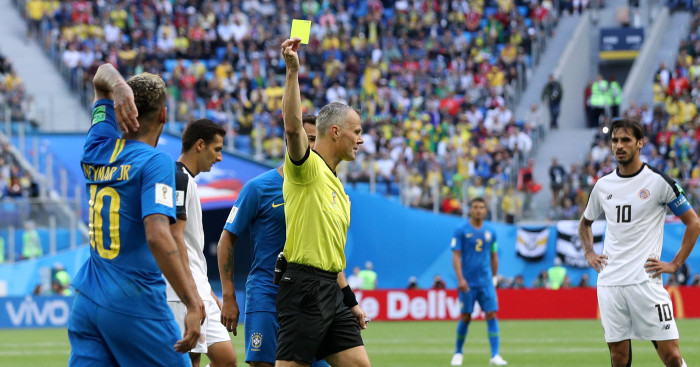 Neymar, Kevin De Bruyne, Paul Pogba and Ivan Rakitic are just some of the top players who must attempt to steer their countries into the World Cup semi-finals this weekend while simultaneously walking the Disciplinary Tightrope.

Yellow cards are not struck from the record until after the quarter-finals, meaning any player with a booking to his name in Russia will miss the semi-finals should he pick up another in the last eight. Whether missing a potentially once-in-a-lifetime World Cup semi-final for getting two yellow cards in five games is fair or not is a moot point. It’s the reality, and there are some huge names currently under that particular cloud.

England have four players on a booking ahead of their clash with Sweden, with Kyle Walker, Jordan Henderson and Jesse Lingard all certain members of the first-choice XI. Ruben Loftus-Cheek is the other man under threat.

Two of Brazil’s biggest stars are on the tightrope, with Philippe Coutinho joining Neymar (and Felipe Luis) on the list.

Croatia, ludicrously, have eight of their players on a booking ahead of the clash with Russia (who have five themselves) including Mario Mandzukic and Rakitic.

Perhaps best of all, arch sh*thouses Uruguay have only one player under threat of suspension. Great bunch of lads.

Here’s the full list of players currently on one booking: