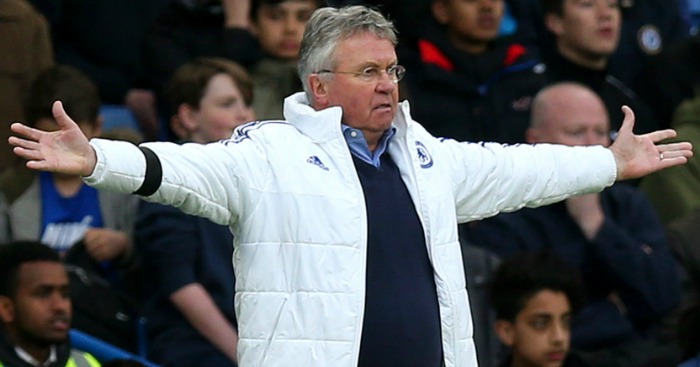 Guus Hiddink is keen to be considered for the England manager’s job, according to The Times.

After Roy Hodgson was sacked in the aftermath of the country’s timid exit at Euro 2016, England are seeking to replace the manager they appointed in 2012.

Gareth Southgate was an initial frontrunner for the post, but has been ruled out of the running as he wants to concentrate on his current role as manager of the under-21s.

Former boss Glenn Hoddle has since been appointed as the favourite, but the list of candidates is frankly underwhelming.

The Times offer an alternative, with Matt Hughes reporting that Hiddink ‘wants to be considered’ for the job, and is ‘seeking talks’ with the FA.

Hiddink is out of employment having ended the season in interim charge of Chelsea, who he guided away from relegation fears to mid-table obscurity in the Premier League.

Hughes reports that while the Dutchman ‘had intended to retire’ after ending his second spell at Stamford Bridge, he ‘would consider returning to work for the right challenge’.

The 69-year-old would bring with him a wealth of experience. He has managed five national teams – the Netherlands, South Korea, Australia, Russia and Turkey – achieving notable success with them, and has also managed clubs such as Real Madrid, PSV and Valencia. Or England could appoint Hoddle, whose last period as a manager ended ten years ago at second-tier Wolves.

‘Hiddink recently rejected an approach from the Russian football federation to return to managing its national team before the 2018 World Cup,’ Hughes writes, ‘as well as lucrative offers from clubs in China and Saudi Arabia in the last month.

‘He ticks most of the boxes mentioned by Martin Glenn, the FA chief executive, as he is an inspirational figure with management experience at international and Champions League level, as well as in the Premier League.

‘The most obvious thing that counts against him is his age, as he is unlikely to be the man to guide England through to the 2022 World Cup in Qatar.

‘Hiddink would pitch himself as a stabilising influence if approached by the FA, offering his services initially for a period of two years, building towards the World Cup in Russia.’

Hughes also intimates that part of Hiddink’s ‘manifesto’ would be to ‘groom a successor’ – preferably an English coach – with a view to being replaced at the end of his tenure.