Home All The News ‘You coward’: Ozil details heated row with Mourinho 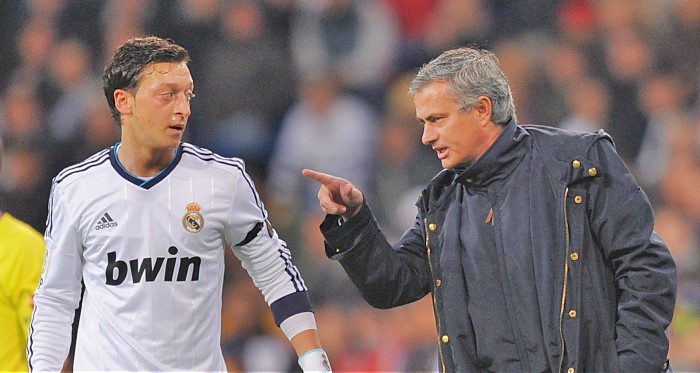 Mesut Ozil has opened up on a heated dressing-room row he had with Jose Mourinho while both were at Real Madrid.

Ozil worked under the tutelage of manager Mourinho for three years at Real, winning one La Liga title, a Copa del Rey and a Supercopa de Espana before both left the club in summer 2013.

In his upcoming autobiography, serialised by German newspaper Bild, the Arsenal midfielder has discussed a heated row he had with Mourinho, who branded him a “coward”.

Ozil claims that the two engaged in a bitter row after a game, with Mourinho shouting: “You think two beautiful passes are enough… You think you’re so good that fifty percent is enough.”

‘He pauses. Stares at me with his dark brown eyes. I stare back. Like two boxers at the stare-down before the first round. He shows no emotion. Just waits for a response from me. How much I hate him right now. And I love Mourinho actually.’

Ozil adds that he threw his Real shirt at Mourinho as the argument escalated. The Manchester United boss responded by shouting:

“Oh, are you giving up now? You’re such a coward. What do you want? To creep under the beautiful, warm shower? Shampoo your hair? To be alone? Or do you want to prove to your fellow players, the fans out there, and me, what you can do.”