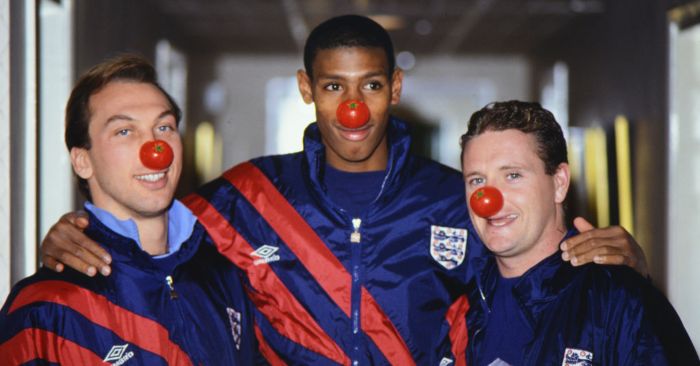 With Jadon Sancho and his potential move to Manchester United making the headlines this summer, along with Jude Bellingham’s switch to Dortmund as the next big talent from these shores, it seems as if the days of English players staying at home in their youth is long over. Gerry Hitchens and Joe Baker were the anomalies of the 60s, blazing a trail for the members of this team made up from Englishman who played abroad before they were 30.

Goalkeeper: Joe Hart
One moment he was head and shoulders above every other English goalkeeper, yet in a flash Pep Guardiola decided Joe Hart wasn’t the best a man could get and he replaced the long-serving Manchester City number one. Hart was 29 when he spent a season on loan at Torino after losing his starting spot at the Etihad and he continued to play for the Three Lions during his Serie A stay. If you fancy a goalkeeper challenge, try naming another English international ‘keeper with Manchester City connections who had a spell abroad in his 20s.

Right-back: Micah Richards
England’s ninth youngest player of all-time had a forgettable loan spell with Fiorentina when he was 26. The West Midlands-born defender was a regular in Manchester City’s title-winning 2011/12 season but barely played for the club in the following campaigns. His year in Italy did little to reinvigorate his career and by the time he turned 31, Richards decided he’d be better off arguing with Roy Keane for a living.

Centre-back: Des Walker
Another Englishman who spent a year in Italy, a 26-year-old Des Walker left Nottingham Forest for Sampdoria prior to the inaugural Premier League season. Forest struggled –although not for goals – without the England international, suffering relegation in Brian Clough’s last year at the club. Walker wasn’t having the time of his life either and returned home with Sheffield Wednesday after a difficult spell under Sven-Goran Eriksson at the Stadio Luigi Ferraris.

Centre-back: Jonathan Woodgate
A spectacular diving header into his own net, combined with a sending off-on his Real Madrid debut, meant Jonathan Woodgate didn’t exactly blaze a trail for popularising English defenders in La Liga. The Middlesbrough native was in his mid-20s at the time and had spent the early years of his career impressing at Leeds United. Another Englishman who left these shores before his 30th birthday is Anton Ferdinand, who ‘enjoyed’ a brief stay in Turkey.

Left-back: Lee Sharpe
Joleon Lescott was almost collecting his pension by the time he rocked up in Greece with AEK Athens, so Lee Sharpe will have to play at left-back in this team. The undercapped Englishman didn’t see eye to eye with George Graham at Leeds and attempted to resurrect his faltering career with a loan spell at Sampdoria when he was 27. It didn’t go well and although Sharpe returned to the Premier League with Bradford City, he never came close to recapturing his Manchester United glory days.

Right-wing: David Beckham
With 55 of his 115 England caps won whilst he was playing abroad, it’s fair to say David Beckham’s time away from the Premier League went rather well. Goldenballs left Manchester United when he was 28 and continued to ply his trade abroad for another decade. Merseyside-born Steve McManaman takes a spot on the bench, having switched Anfield for the Bernabeu when he was 27. United will hope Sancho can scale Beckham’s heights if he joins.

Defensive midfield: Paul Ince
A two-time title winner with Manchester United in the nascent years of the Premier League, Paul Ince’s departure from Old Trafford when he was just 27 years old came as a shock to fans of the club. The London-born midfielder spent two seasons with Inter Milan after leaving the Red Devils and helped the Nerazzurri to a third-place finish in the 1996/97 season. Owen Hargreaves takes a spot on the bench, with the Canadian-born England international spending his early years in Germany with Bayern Munich.

Attacking midfield: Paul Gascoigne
Serie A was the place to be for the world’s best footballers in the early 90s and England’s World Cup hero Paul Gascoigne certainly fit the bill. The Geordie-born genius spent three seasons with Lazio after leaving Tottenham Hotspur in his mid-20s. Gazza returned to the UK with Rangers in 1995 but didn’t make his Premier League debut until he was in his thirties.

Attacking midfield: David Platt
Like Gascoigne, David Platt was playing his football in Serie A come the advent of the Premier League. The Greater Manchester-born midfielder left Aston Villa when he 25, signing for southern Italian side Bari. Platt went on to play for Juventus and Sampdoria before returning to England with Arsenal in 1995. Another former Villa favourite signed for Bari in his 20s, with European Cup winner Gordan Cowans playing in Italy. The late, great Ray Wilkins is also eligible for the side, having signed for AC Milan when he was 27.

Left-wing: Chris Waddle
There’s plenty to love about Chris Waddle, including his all-singing, all-dancing spell with Marseille in the late 80s and early 90s. The talented winger left Tottenham Hotspur when he was 28 and became a legend in France, helping the south-coast side to the European Cup final in 1991. Joe Cole’s Gallic spell was far less successful, with the former Chelsea and West Ham midfielder just about qualifying for this side after joining Lille for a loan spell a few months before his 30th birthday.

Striker: Michael Owen
Kevin Campbell spent time in Turkey his 20s; Peter Beardsley made waves as a young man in Vancouver; Mark Hateley’s home was in Milan when he was just 22; and Teddy Sheringham travelled to Sweden in his teens, as did Peter Crouch. However, Michael Owen’s huge move to Real Madrid in 2004 at the age of 24 gets him the starting spot in this side. The former Ballon d’Or winner returned to England a year later with Newcastle United and went on to become one of the few players to follow up a Premier League relegation with a Premier League title.