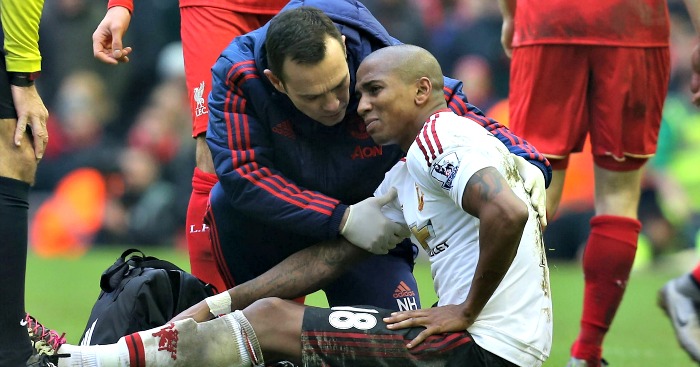 Louis van Gaal has confirmed that Ashley Young will be out for “a long time” with a groin injury.

Young suffered the injury during the 1-0 victory over Liverpool last Sunday after a clash with Reds midfielder James Milner. Cameron Borthwick-Jackson replaced the England international just before half-time.

Speaking to MUTV, Van Gaal confirmed that the full-back would be missing with a “severe groin injury”.

Louis van Gaal tells #MUTV Ashley Young has a severe groin injury and will be operated on. The #mufc winger will be out for "a long time."

Manager Van Gaal also confirmed Bastian Schweinsteiger and Phil Jones would not be fit to feature against Southampton on Saturday.

Midfielder Schweinsteiger has not played since picking up a knee injury in the FA Cup third-round clash with Sheffield United earlier this month, while Jones’s last appearance came against Swansea, where he suffered a knock to his ankle.

Van Gaal confirmed that Adnan Januzaj, back from his loan at Borussia Dortmund, would be available at Old Trafford.