Home All The News Zabaleta: Fellaini’s reaction ‘a bit strange’ 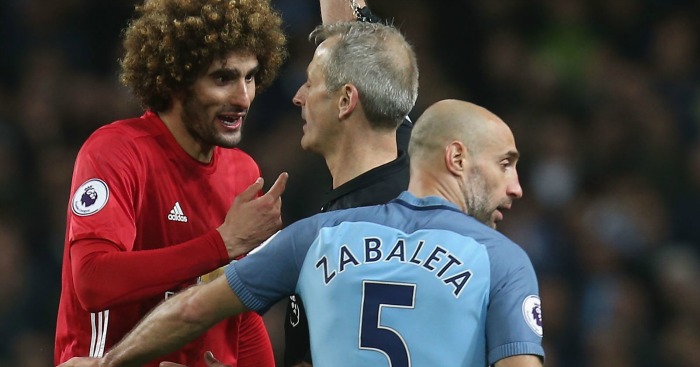 Fellaini saw red in the closing stages of a tense 0-0 draw at the Etihad Stadium, fouling Sergio Aguero twice in a minute then headbutting the City striker as the pair squared up to each other.

The Belgian midfielder’s shameful loss of control was completed by his exaggerated remonstrations before leaving the field, but his team-mates were able to hang on for the final whistle and take a point from a derby dominated by their rivals.

“It was a bit crazy at the end, that reaction from Fellaini,” Zabaleta told Press Association Sport.

“Both fouls were very clear, then the head into Aguero two minutes after fouling Sergio.

“It was all in one minute…in a game like this it’s a bit strange.”

Fellaini was named in a United midfield which seemed designed to stifle City rather than compete creatively with them.

He started alongside Michael Carrick and Ander Herrera, just the second time this season the trio have been named in the same XI following a 1-1 with Everton three weeks ago.

Zabaleta acknowledged the absence of the injured Paul Pogba was a factor but felt United’s tactics were not designed to deliver victory, despite City being a point ahead of them in the Champions League race.

“We knew United defensively are a really good team, but we dominated possession and we were the only team who played to win the game,” he said.

“They were probably missing Pogba, who is a big player for them to play a little bit better football. United always play with a strong midfield but they were a bit more physical with Fellaini, Carrick and Herrera.

“We have to be happy, we did everything we could to win the game.”

Fine margins stood between City and the victory which would have given them a four-point buffer over the Red Devils, with Aguero hitting the post after nine minutes and the returning Gabriel Jesus seeing an injury-time effort chalked off for offside.

Yaya Toure, who enjoyed a powerhouse performance in midfield, was frustrated with a draw and suggested City need a more ruthless streak up front.

“If you don’t score a goal it’s going to finish like that,” he said.

“If we are going to win we have to score goals. We need to work hard on finishing because when you see the stats we have plenty of the ball, lots of chances but we’re disappointed because you have to score a goal.

“We had 20 chances or something. When you play well and have these chances you have to convert.”