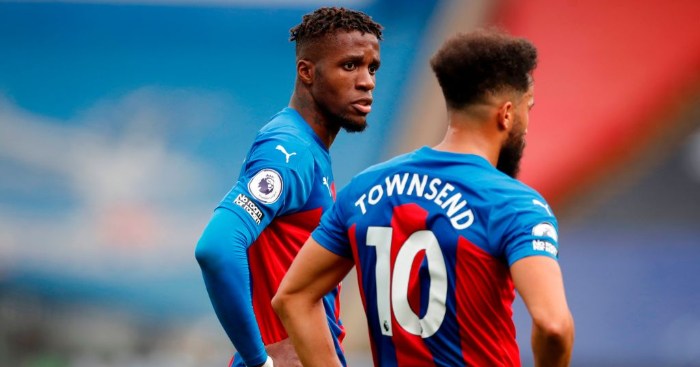 Wilfried Zaha is still “happy” at Crystal Palace despite interest from PSG and AC Milan, according to Andros Townsend.

The forward rejoined the Eagles ahead of the 2014/15 campaign. This came after an unsuccessful two-year spell with Manchester United.

Zaha is in the middle of his seventh successive season with Palace in the Premier League. He has consistently been their best performing player throughout these years.

Since he rejoined the club, he has 44 goals and 41 assists from his 216 appearances in the Premier League.

He is on course for his best goal-scoring season to date this year. Zaha has netted eight from just 15 outings in the league. His next best tally was ten, which came during the 2018/19 season.

In recent years, Zaha has regularly been linked with a move away from Crystal Palace. Arsenal and Everton have been among those rumoured to be interested in him in the past.

It has recently been reported that PSG and AC Milan are the latest sides to show interest in Zaha.

Despite this, when speaking on talkSPORT Breakfast, Townsend insisted that Zaha is happy at Crystal Palace:

“I’ve not spoken to Wilf about it, but he’s started the season well, he’s scored eight goals and I’ve got a couple of assists for him.

“He’s playing well and working hard for the team.

“He’s still happy to be at Palace. I’m sure he’s enjoying walking out for the rest of the season.”