Home All The News Zidane: Bale will get same affection as from Rafa 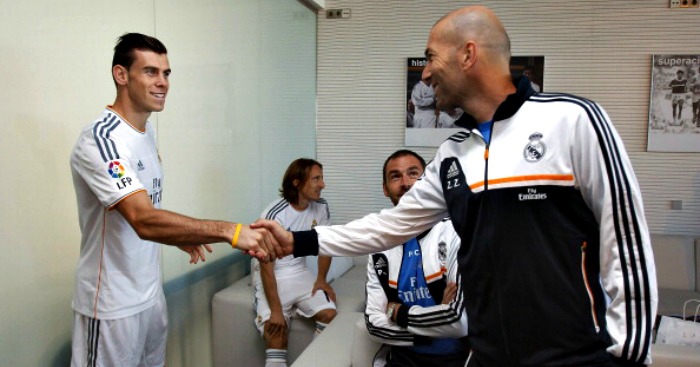 Zinedine Zidane admits Gareth Bale “might be upset” over Rafael Benitez’s departure, but he will play under the new Real Madrid head coach.

The Wales star has been linked with a big money move back to England and Manchester United by the British press. Many of the reports suggested that Bale was upset at the dismissal of Benitez and that would prompt a move away from the Bernabeu with United believed to be at the head of the queue.

But Zidane, who faced the media for the first time on Tuesday, said Bale will get all the support he needs in the Spanish capital

“I understand Gareth might be upset with Rafa leaving. But he will get same affection and support from me as from Rafa,” said Zidane, who has signed a two-and-a-half-year contract.

The former France star was appointed the successor to Benitez on Monday night and says he just wants to win trophies.

“This is something that happened quickly. It was not foreseen. The decision was taken on Monday, I was offered the job and I took it.

“I have two and half years [of contract]. But we have not yet talked about the details.

“Those working with me at Castilla will come with me now, three or four people, nobody else. We are not looking for an assistant.

“I was part of this club as a player. But now is new stage for me, totally different. What I need is to win games, nothing else.

“I want to take this opportunity I have at the best club in the world. I just want to win trophies with this team,” added Zidane.

Zidane, asked if he would stick with Bale, Karim Benzema and Cristiano Ronaldo in attack, added: “Yes, I will play with the three attackers. That is the idea. Of course.”

The 43-year-old did though admit he will change Real’s style of play and look for more balance.

“My style of football will be different, positive, and with balance. What I want to bring you will see in the coming weeks,” said Zidane.

“To play, as we can, from the back, rapid, to play in opposition half and  have possession of the ball. That is my idea of football.

“Team is well placed in the table. We know there are important game still to play. We must improve if we want to win, of course.

“I am not someone who talks a lot with press. But that’s not important. Day to day with players will be fundamental.

“I want to communicate this as a coach, that the players enjoy themselves on the pitch, as they did for sure with Rafa Benitez.

“There is change today, but I believe you must respect and think the work Rafa Benitez did was very good. I wish him luck,” added Zidane.