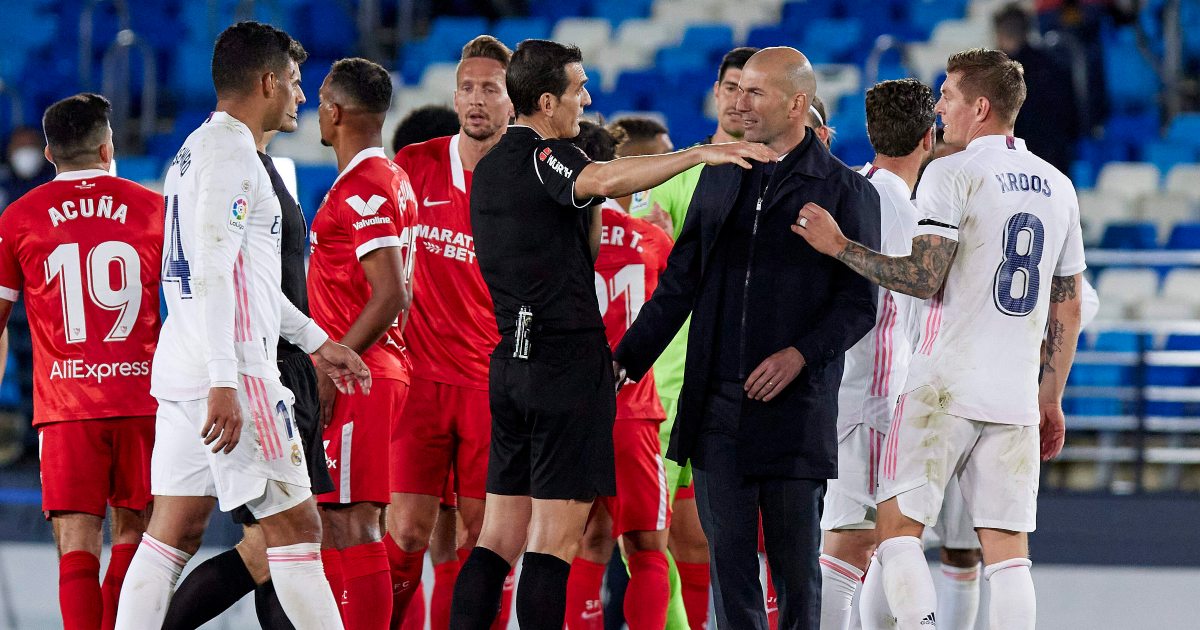 Zinedine Zidane questioned the decision to award Sevilla a penalty as Real Madrid missed the chance to move level on points with La Liga leaders Atletico Madrid despite rescuing a 2-2 draw in stoppage time.

A goalless draw between Atletico and Barcelona on Saturday gave Zidane’s side an opportunity to capitalise but they fell behind at the Estadio Alfredo Di Stefano to Fernando’s 22nd-minute goal as Sevilla looked to boost their own slim title hopes.

Marco Asensio levelled matters midway through the second half and, although former Barcelona midfielder Ivan Rakitic’s 78th-minute penalty put Sevilla ahead once more, Toni Kroos’ shot was deflected deep into stoppage time – with Eden Hazard appearing to get the final touch in front of defender Diego Carlos.

Sevilla’s penalty came after the referee had initially awarded a spot-kick to Real for a foul on Karim Benzema, but after a VAR check it was decided that Eder Militao had handled at the other end in the build-up.

“I was not convinced by what the referee told me, but it is what it is, he whistles,” Zidane said in quotes reported on Real Madrid’s official website.

“I don’t understand anything. There was a hand from Militao, but also from Sevilla.

“Today I am a little angry because they have to explain the rules of the hands to me. But it is what it is, we are not going to change anything.

“The title is not up to us now, but we are going to fight to the end, to the death.

“We have to think about the three remaining games. I’m also upset about the game we played, because we deserved more.

“The players gave it their all on the field and deserved a victory.”

The result leaves both Barcelona and Real two points behind Atletico, while Sevilla are six adrift, with three fixtures remaining.