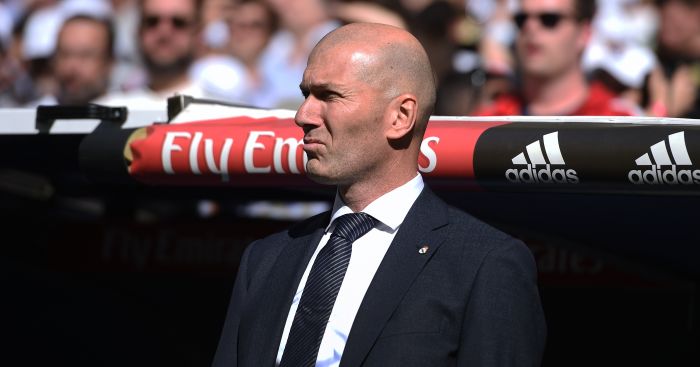 Zinedine Zidane wants to overhaul his Real Madrid squad this summer with a trio of signings, according to reports.

The Frenchman stepped down at the end of last season after guiding Real to three consecutive Champions League titles and was replaced by Julen Lopetegui.

The former Spain manager’s spell lasted until just October and Santiago Solari was brought in to take his place.

But after a string of poor results, including back-to-back defeats to rivals Barcelona and a Champions League exit at the hands of Ajax, Real opted to replace Solari with Zidane.

Thursday’s edition of L’Equipe comes with the front page headline of ‘Casino Royal’ with the report claiming Zidane will be given ‘a €500million (£427m) summer budget to overhaul his squad with Kylian Mbappe, Paul Pogba and Eden Hazard’.

It is not the first time those three players have been linked with Real Madrid, especially Chelsea forward Hazard, who has been flirting with reported interest from Real over the past couple of years.

Pogba has recently been back on the agenda following Zidane’s return to the Bernabeu with the Manchester United midfielder saying it would be a “dream for anyone” to play for him.

However, the Evening Standard claimed on Wednesday that United ‘plan to open talks over a new contract’ for Pogba and will ‘resist any move’ from Real Madrid or any other clubs for the 26-year-old.

Mbappe, meanwhile, has been on Los Blancos’ radar from before he completed his £168million move from Monaco to Paris Saint-Germain, and it would take a huge offer to prise him away from the French champions.