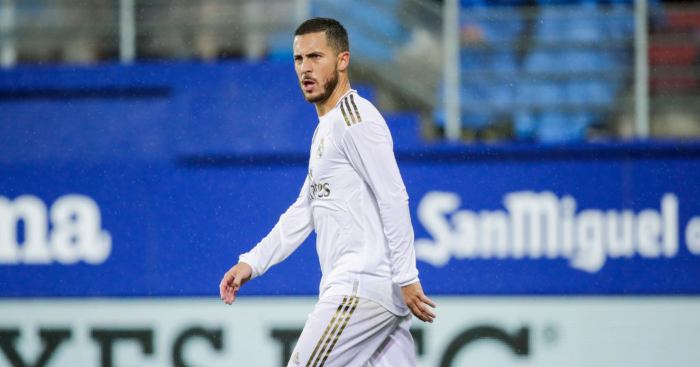 Zinedine Zidane is not sure if Eden Hazard will play for Real Madrid again this season.

The former Chelsea playmaker is facing another lay-off after fracturing an ankle in Real’s surprise defeat to Levante in LaLiga last weekend.

It was only the Belgian’s second appearance since November after recovering from another injury to the same ankle.

The loss of the 29-year-old, who is yet to make his mark since his £89million move from Stamford Bridge last summer, is a big blow to Zidane at the start of a crucial week.

Real host Manchester City on Wednesday in the first leg of their Champions League last-16 tie before facing arch-rivals Barcelona, who leapfrogged them to top spot in LaLiga last weekend, on Sunday.

Speaking at a press conference, Zidane said: “He loves playing football and while I can’t tell you what is in his eyes, I can see he is not happy.

“It’s important he stays positive but, of course, it’s difficult. It’s a bad moment, it won’t be easy and he will feel like that for a while.

“I do not know if he will have to go through an operation. It is not my area and I don’t know if his season is over, but I hope not.”

Zidane would not comment on suggestions Hazard’s rehabilitation from his previous injury was not handled correctly.

“I am not the right person to say what should have been done or shouldn’t have,” said the Frenchman. “They are professionals and very capable in their area.

“We are not happy about Hazard’s injury, it comes at a bad moment. He wanted to play and help us but now he is out again, which is sad of course.

“I hope when he’s back again he is completely fit. That’s what everyone wants and that’s it.”

The Champions League tie brings Zidane, who has guided Real to three victories in the competition, up against Pep Guardiola, a two-time winner with Barcelona.

Despite having one more success to his name, Zidane claims his opponent is the better coach.

He said: “He has shown that over the years, at Barca, Bayern (Munich) and now City. That’s my opinion. Some people can think other coaches are better but for me, he is the best.

“But it is Madrid against City, not Zidane against Guardiola. It will be a great game. We always want to play games like this and we will do our best to come away with a good result.”

City go into the game with a cloud hanging over them after they were banned from the competition for the next two years by European governing body UEFA over Financial Fair Play breaches.

Real captain Sergio Ramos, however, believes that could motivate City.

He said: “It’s hard to know. Fortunately it’s not something that happened to us.

“Obviously it’s bad news for the players that want to keep playing in the competition but also it’s a good way for them to have motivation and to want to show what they’re capable of.

“And when they return in three years perhaps they will want to win more than ever.”