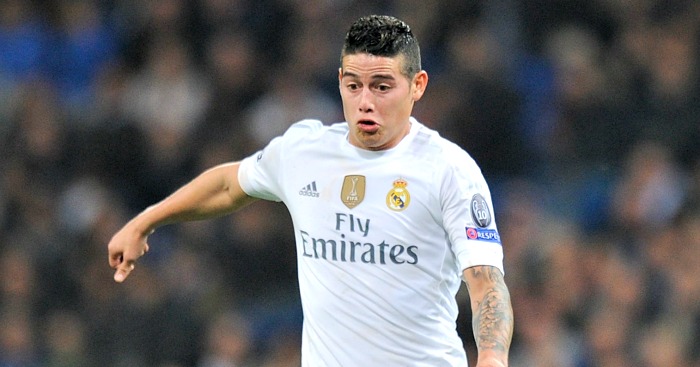 Zinedine Zidane believes James Rodriguez has been treated harshly and insists the Colombian is committed to the Real Madrid cause.

But Zidane, speaking ahead of Saturday’s home game with Celta Vigo, said: “I think James has been treated a bit unfairly,

“However, the players are well aware that when they play well, they will get lots of nice things said about them.

“It bothers me when people speak ill of James because he’s my player.

“James is committed to the cause.”

Toni Kroos (flu) and Luka Modric (foot) will miss the Celta game but Sergio Ramos and Dani Carvajal, who both served a suspension in midweek when Real won 3-1 at Levante, are available.

Fellow defender Marcelo, who sat out the Atletico and Levante games with injury, is fit, as is Wales striker Gareth Bale who has missed the last six weeks with a calf problem.

“Gareth is going to be in the squad, which is a relief for all of us,” said Zidane.

“We’ll see what happens with Wales [whether they call him up for their friendlies later this month] when the time comes, but what’s important right now is Real Madrid and that we take it one step at a time with him.

“The team look good to me and the players have also told me that they feel an improvement.

“We mustn’t say that they were in a bad way before, because that’s not the case, but with the work we’ve put in, we’re in good shape now.”

Asked whether he asked the players to show more effort following the 1-0 home defeat to city rivals Atletico last weekend, Zidane said: “I may have pushed the players to run a bit more, but I also want to say that it’s normal for you to run less when you have the ball.

“That said, yes, it is easier to win every match if you run a lot.

“Those who played [against Levante] were ready.

“I’ve never liked the whole ‘Zidanes and (Francisco) Pavons’ thing, because the way I see it, everyone is equal in a dressing room.

“The youngsters want to play and are prepared.”

Celta played out a goalless draw at home to fourth-placed Villarreal on Wednesday and currently occupy a Europa League position.

Eduardo Berizzo’s side lie sixth and have been buoyed by the return of Spanish international Nolito, who spent two months on the sidelines with a hamstring injury.

“We are going to play as we know, be faithful to our game plan and to take the three points,” Celta’s Denmark midfielder Daniel Wass said at a pre-match press conference.

“All games in Spain are special but when you face one of the great teams it is even more so.

“There are still many games to go but Barcelona are at the top and have an important advantage over Real Madrid.

“This is football and anything can happen, but now I see it as difficult [for Madrid to win the league].”