Home F365 Features Zizou next? Five of the most successful managerial returns 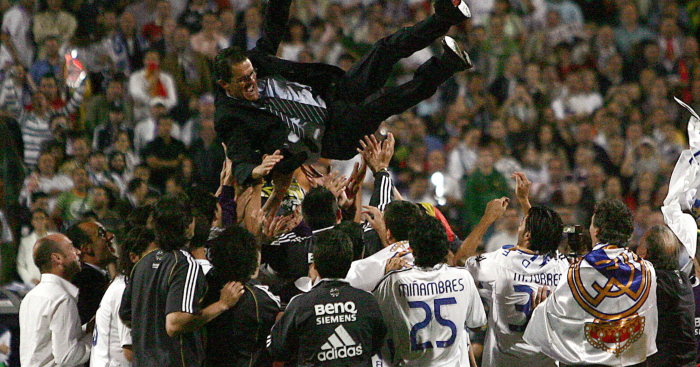 Some were not quite so successful…

Fabio Capello had been the most recent member of that illustrious group. He took over in 1996, two years after winning the Champions League with AC Milan. But his appointment was never a popular one. Although he managed to dial down his pragmatic, defensive tendencies, his use of Raul as a winger proved unpopular.

The Italian lasted just one year in Spain, winning La Liga in what was Real’s first season out of European competition altogether since 1977/78. And he would return in similarly difficult circumstances in 2006, tasked with winning a first trophy since the 2003 Supercopa de Espana.

Don Fabio succeeded where a slew of managers before him had failed during one of the most tumultuous periods of Real’s entire modern history. A 3-1 win over Mallorca on La Liga’s final day, precipitated by two goals from substitute Jose Antonio Reyes, wrestled the title back from Barcelona.

It mattered little. Capello – knocked out at the last-16 stage of both the Champions League and Copa del Rey – simply proved too incompatible with the Real style. But he had once again stabilised a giant that was in danger of collapsing under its own weight.

Tony Pulis
“In the past two or three years we have not been able to attract foreign players as much as we would have liked,” said then-Stoke chairman Gunnar Gislason, clearly unfamiliar with the inner workings of hard-boiled-naked-shower-assaulting Welshman Anthony Richard Pulis. It was akin to buying a Ford Focus and wondering why it wasn’t running like a Ferrari.

Pulis had done a reasonable job at the Britannia Stadium. Steve Cotterill’s resignation saw him appointed in November 2002 with Stoke two points above the First Division relegation zone. The signings of Ade Akinbiyi and Mark Crossley on loan helped secure a final-day survival that Pulis still considers to be one of his finest achievements.

Finishes of 11th and 12th in subsequent seasons represented further improvement, but Pulis and Gislason continued to clash. The manager was unhappy that free agents Dave Brammer and Steve Simonsen were his only new arrivals in the summer of 2004, while the chairman was so eager to “exploit the foreign transfer market” that former Dutch international Johan Boskamp was brought in to replace him by June 2005.

By June 2006, Gislason and Boskamp were both gone, with Peter Coates completing Pulis’ redemption arc. “Tony has a reputation for playing a direct style of football,” the new chairman admitted. “But in our league, is a direct style of play necessarily such a bad thing?”

Over the next seven years, Pulis would take Stoke from mid-table to mid-table, swapping Championship serenity for Premier League stability. The Potters were promoted in his second season, never finished lower than 14th – or higher than 11th – in five top-flight campaigns, reached an FA Cup final and even enjoyed a spell in Europe. One in the eye for Gunnar Gislason, that.

Jupp Heynckes
Once you go Jupp, the only way is up. Once you stop, the bubble pops.

Bayern Munich have returned to the Heynckes well four times. He has managed Die Roten for a combined seven years, yet the spells have come in four different decades. He won one Bundesliga in the 1980s, another in the 1990s, came close to almost accidentally repeating the feat as caretaker for one month in 2009, then claimed the crown in both 2013 and 2018.

The 73-year-old’s greatest success came in Europe. Save for his first season in 1987/88, Heynckes reached the semi-finals of every European Cup, UEFA Cup and Champions League campaign he finished with Bayern, either winning the tournament or losing to the eventual champion.

Uli Hoeness described the decision to sack Heynckes in 1991 as “the biggest mistake of my career” for a reason. He is one of just eight managers to have ever won the Treble, and one of Bayern’s three greatest ever.

Harry Redknapp
If Harry Redknapp’s Portsmouth return was not ‘triumphant’ in terms of fan reception, it was most certainly a success based on any other measure. The 72-year-old is hardly remembered fondly at Fratton Park despite guiding the club to the First Division title, relegating Southampton and winning the FA Cup at Wembley, but that hat-trick only tells half the story.

Redknapp took over Pompey in March 2002, having been appointed as director of football the previous year. Powered by the peculiar Come Dine With Me line-up of Shaka Hislop, Paul Merson, Nigel Quashie and Svetoslav Todorov, they sauntered to Premier League promotion in his first season.

After finishing 13th in 2003/04, Redknapp did the unthinkable. He left after a dispute with Milan Mandaric in November 2004, waiting a matter of weeks to cross the border to Southampton. “I don’t see it as an act of betrayal,” he insisted, but cries of ‘Judas’ and ‘Scummer’ suggested the fans disagreed ever so slightly.

Saints finished bottom, compounding critics who had questioned Redknapp’s initial decision. But just four days after his departure in December 2005, he was back at struggling Portsmouth to keep them up, win the FA Cup two seasons later, and receive the Freedom of the City by October 2008.

That honour came less than a week after ditching the club again to join Tottenham – a point that was lost on neither Portsmouth nor Southampton supporters.

Nigel Pearson
A brief spell with the Tigers and a fight with a pack of wild Romanian dogs is all that separated two hunts with the Foxes and a battle with an ostrich for Nigel Pearson. “I know my part in what’s happened there since,” he said of a side who won the Premier League title 12 months after he left them in mid-table.

He certainly laid the foundations for such remarkable success, and not just in the season before. Pearson first arrived at the King Power Stadium in 2008, with Leicester in League One. He secured promotion at the first time of asking, losing in the Championship play-off semi-final the following season.

After leaving that summer, Pearson trekked his way up to Hull, but spent just 17 months there before returning to a newly-Mandaric-less Leicester. They came ninth and sixth before finally reaching the promised land by winning the Championship title.

A difficult season in the top flight was pierced by seven wins in Leicester’s last nine games to help a team that was bottom at the start of April to 14th by mid-May. He left under a typical cloud, but made way for a wonderful Claudio.