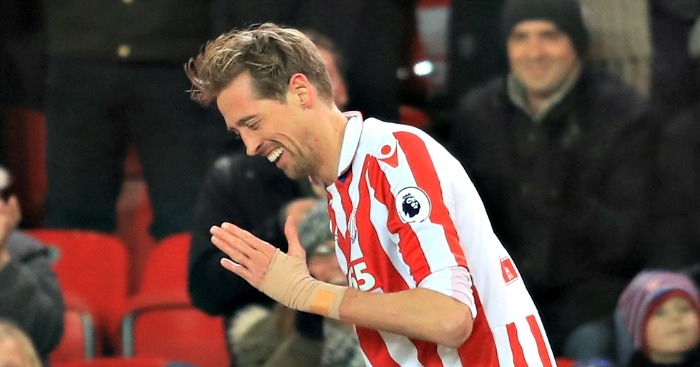 They say age is but a number. Zlatan Ibrahimovic is living proof as he bagged a brace in Sunday’s EFL Cup final. His appearance at Wembley at the weekend was his 38th of the season, not a bad return for a player who turned 35 back in October. But where does he rank among the Golden Oldies this season? Here, WhoScored.com run down the best rated players aged 35 and older to have made 15 or more league appearances in Europe’s top five leagues this term…

10) Rod Fanni – Marseille (WhoScored.com rating 6.96)
Stop sniggering. Marseille were put to the sword at the weekend as they succumbed to a disappointing 5-1 loss to rivals PSG in Le Classique at the Velodrome. The 35-year-old Rod Fanni wound back the years to net a consolation for L’OM and he has performed above expectations following his return to the south of France after the club opted against renewing his contract 18 months ago. Averages of 1.7 tackles and 2.1 interceptions per game are respectable returns for Fanni, with Marseille boasting a better win percentage with the centre-back starting in Ligue 1 this season (45%) than when he does not (28.6%).

9) Alessandro Gamberini – Chievo (6.97)
Chievo are performing better than some expected at the beginning of the campaign, with the Gialloblu currently tenth in Italy’s top tier following a 2-0 win over Pescara at the weekend. Having conceded just 34 times in 26 league games, the vastly experienced Alessandro Gamberini has remained steadfast at the heart of the Chievo defence this term. A WhoScored.com rating of 6.97 is the fourth best for the club, with his dominance in the air a key factor in the club developing a statistically calculated strength of ‘aerial duels’, with the centre-back winning 45 of 61 contested headed battles this term.

8) Aduriz – Athletic Club (6.97)
One player who routinely rolls back the years is the vastly experienced Spanish hitman Aduriz. At 36 years of age, the striker would be well within his rights to take things far easier in La Liga, but having started 17 of 24 league games this term, the Spain international routinely defies the odds to impress for the Basque outfit. Eight goals and one assist is a commendable return for Aduriz, who is expected to break double figures for goals for the fifth straight season.

7) Gareth Barry – Everton (6.98)
Considering Ronald Koeman’s midfield options, you’d be forgiven for thinking the Toffees boss would cast Gareth Barry aside, particularly following Tom Davies’ emergence, Idrissa Gueye’s return from the Africa Cup of Nations and Morgan Schneiderlin’s January arrival. However, 36-year-old Barry is a key player under Koeman, which is no surprise when you consider he’s made the second most tackles (2.5) and third most passes per game (47.3) for the Toffees this term. Having penned a new deal until 2018 back in December, there is certainly more to come from Barry with the Toffees boss keen to keep the former England international on the books.

6) Peter Crouch – Stoke (6.99)
After being strongly linked with a move away from Stoke City before the January transfer window, manager Mark Hughes turned to the beanpole striker to ease the Potters’ goalscoring woes. Peter Crouch hasn’t let his boss down. With his four league goals second only Joe Allen (6) of all Stoke players this term, such was his re-emergence as Stoke’s primary frontman that the club rewarded him with a new one-year contract at the beginning of January, with his WhoScored.com rating from starts alone (7.48) second only to Marc Muniesa (7.63) for Stoke this season.

5) Alaeddine Yahia – Caen (7.00)
Coming in as the fifth best Golden Oldie in Europe, centre-back Alaeddine Yahia is enjoying something of a renaissance to his Ligue 1 career, with a WhoScored.com rating of 7.00 his best in his three seasons with Caen. The Tunisian defender has started 23 of 27 league games for the French outfit this term as has rarely put a foot wrong at the heart of the defence, with an average of 4.7 clearances per game the second best of all Caen players. With Patrice Garande’s side sat just four points above the relegation play-off spot in Ligue 1, Yahia’s experience could prove vital in the coming weeks in their bid to consolidate their top-flight status.

4) Benoit Pedretti – Nancy (7.04)
Remaining in France, this time with Ligue 1 returnees Nancy, 36-year-old Benoit Pedretti is playing a vital role in the club’s quest to stave off relegation. A wildly pragmatic Nancy side are tough to break down, but their lack of firepower at times has cost the club. Indeed, they have scored fewer goals (18) than any other Ligue 1 side this season. It’s not for want of trying on Pedretti’s behalf, however, with the French midfielder top for passes (52) and key passes per game (2.2) for Nancy this term. To put the latter stat into context, Loic Puyo and Vincent Marchetti are joint-second for key passes per game with 0.8. Provided the strikers can find their scoring touch, then Pedretti can be expected to add to his two league assists this term before the season is out.

3) Gareth McAuley – West Brom (7.20)
Gareth McAuley is undoubtedly a fantasy football player’s dream. The 37-year-old isn’t the most expensive defender on the game, but is a threat in the opposition box. Indeed, his goal against Bournemouth was his sixth of the campaign; no centre-back has scored more in Europe’s top five leagues this season. The Baggies have conceded just 32 times this term, adding to McAuley’s appeal with his form returning an average WhoScored.com rating of 7.20. He performed above that average at the weekend, with a rating of 7.87 against Bournemouth earning him a place in WhoScored.com’s Premier League team of the week.

2) Xabi Alonso – Bayern Munich (7.28)
As the weeks tick down towards Xabi Alonso’s retirement, the Spaniard continues to impress in the Bayern Munich midfield. He’s started 17 of the Bundesliga side’s 22 league games this season, gaining a respectable WhoScored.com rating of 7.28. While his influence has dipped somewhat, with 79.8 passes per game and an 88.1% pass success rate both his lowest returns during his time in Germany, the former is still the fourth-highest return in the Bundesliga. What’s more, three goals is his best return since the 2009/10 campaign with Real Madrid as Alonso enjoys a goalscoring end – by his standards anyway – to a glittering career. 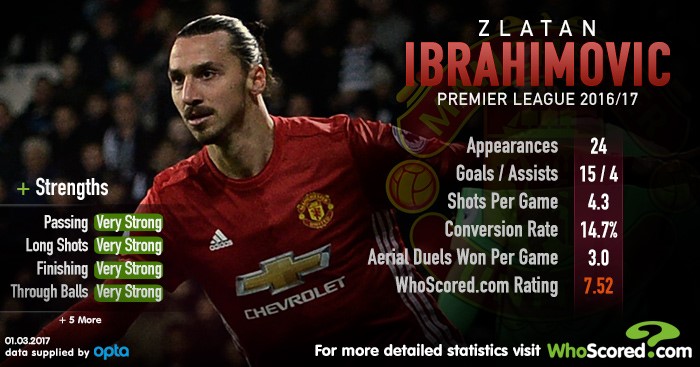 Was there really going to be anyone else? Zlatan Ibrahimovic has taken to the Premier League like a duck to water. While he endured a goal drought earlier in the campaign, where he scored just one goal in 11 competitive appearances, the mercurial Swede is back to his barnstorming best and is in fine form coming into spring despite being in the autumn of his career. 15 Premier League goals is a fine return for the 35-year-old, who is averaging more shots per game (4.3) than any other player in England’s top tier this term. His contract expires at the end of the season, but Manchester United fans will be demanding the club extend his deal on the back of what has been a superb debut campaign.