Presumably Tyrone Minds has been charged for "jumping into Zlatan's elbow". 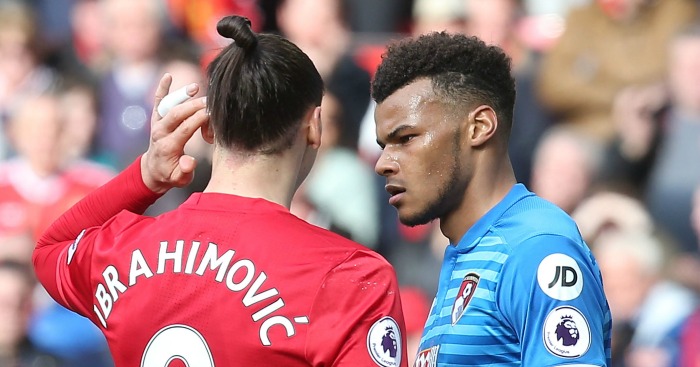 Zlatan Ibrahimovic and Tyrone Mings have both been charged by the Football Association for incidents of alleged violent conduct in Saturday’s 1-1 draw between Manchester United and Bournemouth.

Cherries defender Mings stood on the head of Ibrahimovic moments before the United striker’s elbow struck the Bournemouth player just before half-time at Old Trafford in two incidents that were not seen by referee Kevin Friend and went unpunished at the time.

Ibrahimovic faces the possibility of a three-match ban, which would see him miss United’s FA Cup trip to Chelsea and Premier League games with Middlesbrough and West Brom, while the FA has submitted a claim that a similar punishment for Mings is “clearly insufficient”.

Both players had protested their innocence following the contest by claiming there was no intent behind their actions, with Mings telling Sky Sports he would “never” purposely stamp on anyone and Ibrahimovic claiming to BBC Sport that Mings jumped “into my elbow”.

Yet that was not the view of a panel of three former elite referees who reviewed the video footage and unanimously determined that both incidents were considered sending-off offences.

An FA statement read: “Zlatan Ibrahimovic and Tyrone Mings have both been charged with alleged violent conduct following the Manchester United versus AFC Bournemouth game on Saturday (4 March 2017).

“The players were involved in two separate incidents in or around the 44th minute which were not seen by the match officials at the time but caught on video.

“Furthermore, The FA has submitted a claim that the standard punishment that would otherwise apply for the misconduct committed by the Bournemouth defender is ‘clearly insufficient’.

“Both players have until 6pm on Tuesday 7 March 2017 to reply to their charge.”