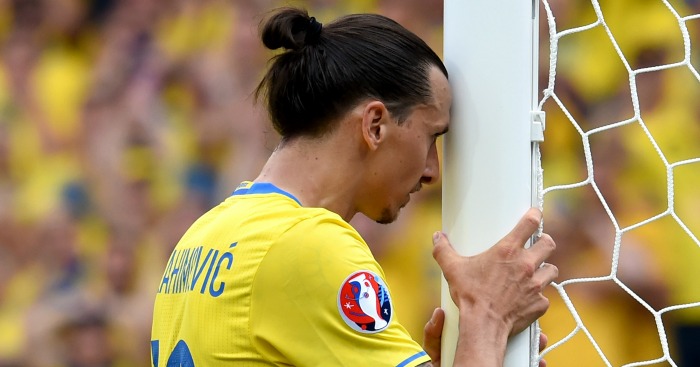 ZLATAN STILL HASN’T MADE UP HIS MIND
Hands up who is bored by the Zlatan Ibrahimovic saga? Oh good, come join us.

After weeks of Zlatan fluttering his eyelashes and twirling his hair through his finger while laughing just a little bit too loud at Manchester United’s jokes, his agent Mino Raiola says that his client hasn’t yet made his choice.

“Manchester United are a great team with a great coach,” Raiola said.

“It’s fascinating. I’ve made my decision, but he hasn’t made his. He’s really busy with the Euros.

“Out of respect for the Euros, the team, the country and the coach he has to be professional and concentrate on that.”

The line “out of respect for the Euros” at least made us laugh.

GIACCHERINI WOULD WELCOME CHELSEA MOV…. HAHAHAHA
It’s hard to believe that the Emanuele Giaccherini who has played so well in both of Italy’s first two matches at the European Championship is the same guy who looked so lost at Sunderland. He’s still officially a Sunderland player, having been loaned out last season.

The award for optimism goes to Giaccherini’s agent Fulio Valcareggi, who claims that moving to Chelsea would be a dream come true for Giaccherini. To confirm, it would also be a dream for every one of us at 365 Towers.

“Giaccherini is a player who played 80 per cent of the games for a Juventus that had Pogba, Pirlo, Vidal and Marchisio in midfield,” Valcareggi said. “Conte likes him a lot and Chelsea would be a dream. It’s still too early to talk about his future. After the Euros, whoever wants to buy him will not have to pay a high price to Sunderland.”

POGBA CAN LEAVE (AND GO TO REAL MADRID?)
To Marca now, and their claim that Juventus have promised midfielder superstar Paul Pogba that he can leave the club this summer – but only if a team can match their valuation of him. That’s kinda how transfers work.

Pogba returned to the France starting line-up in the 0-0 draw against Switzerland at Euro 2016 and caught the eye once again with a dominant display in Lille.

It is thought that only a world-record bid will be enough for Juventus to reluctantly sell their star asset, but are aware that any transfer will not solely be down to which club bids the highest as Pogba wants to join a side that matches his lofty ambitions.

Manchester City and Manchester United are again mentioned as possible destinations for the 23-year-old. However, Marca believe that Real Madrid are still the best-placed to sign one of the world’s biggest talents. They’re right, too.

EVERTON TO PAY £25M FOR WIJNALDUM?
Ronald Koeman is now starting to make his transfer plans for his first summer in charge of Everton, with a reported £100m to spend.

One of the first rumours to surface was that Koeman wanted to take Georginio Wijnaldum from Newcastle back to the Premier League. Koeman tried to sign the Dutchman when in charge of Southampton last summer, but he chose to join Newcastle instead.

Wijnaldum was one of Newcastle’s best players in a miserable season, although often went missing away from home. It’s no surprise that Premier League clubs might be interested.

However, the fly in Koeman’s ointment is the reported fee that Newcastle are requesting. Will Everton really pay £25m for Wijnaldum?

AND THE REST
Senior figures at United expect Ryan Giggs to announce he will be leaving the club in the next few days… Southampton want former Italy goalkeeper and ex-Sampdoria boss Walter Zenga, 56, as their next manager… New Aston Villa manager Roberto di Matteo wants to sign Watford goalkeeper Costel Pantilimon, 29, but there may be a problem over the Romanian’s wages… Arsenal goalkeeper Wojciech Szczesny, 26, is expected to return to the club this summer. He spent last season on loan at Roma but negotiations over extending that deal are not progressing well… West Brom have made a £4m bid for Queens Park Rangers winger Matt Phillips and are close to agreeing a new contract with James Morrison.