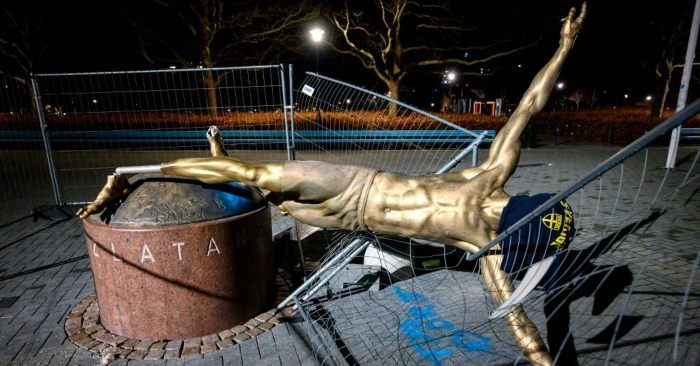 “Most of the people in Sweden think he’s so f**king stupid.”

It’s fair to say it’s been a rough few months for Zlatan Ibrahimovic in his home city.

The 38-year-old striker has just signed for AC Milan but back in his native Sweden, he’s dividing opinion.

It all stems from the fact the Malmo icon has invested in rivals Hammarby and declared that he wants to turn them into the biggest club in Scandinavia.

This hasn’t gone down well with his hometown club.

So much so, a statue of him, which was only unveiled in October, has been totally destroyed by vandals.

One man who played against Zlatan is former IFK Gothenburg and Dundee United midfielder Lars Zetterlund.

He told the Talkin Fitbaw Podcast: “Most of the people in Sweden think he’s so f**king stupid.

“He’s been a great player but something is wrong.

“I cannot understand why he’d do something like this because the whole of Malmo is going to hate him for the rest of their lives.

🗣”Most of the people in Sweden think he’s so fucking stupid.🤬

“If I play with him tomorrow, I’d kick him so hard he cannot walk”

But former Sweden and Hammarby striker Hans Eskilsson, who now sits on the club’s board, has a different view.

“It’s a good thing for the club that Zlatan is one of the owners.  He’s a massive name in Sweden, he can open doors so its fantastic for Hammarby as a club.

“I can’t defend the fans destroying the statue of Zlatan, he’s a legend of Swedish football so it’s an awful thing.

“He said he’s going to make Hammarby the biggest club in Scandinavia and I think the Malmo fans think he’s a Malmo guy so that’s why they’ve reacted in this way.

“He has a house in Stockholm and I think he thinks his future will be there.

“I’m quite happy Zlatan wants to do a good thing for Hammarby.”

You can listen to the full interview with Hans Eskilsson on the Talkin Fitbaw Podcast next Wednesday.