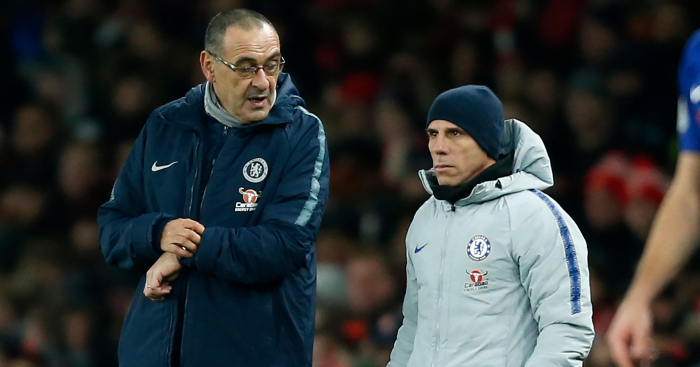 Gianfranco Zola believes some of his former Chelsea team-mates would have been sent off in anger had they been part of the team humiliated by Manchester City.

The Blues suffered their heaviest defeat of the Premier League era as Pep Guardiola’s champions ran riot in a thumping 6-0 victory.

While the 52-year-old Italian stopped short of naming ex-players, he is certain there would have been an aggressive response from his generation to last Sunday’s embarrassment at the Etihad Stadium.

“Every group has its own characters in it. There would have been some of the players in that group who wouldn’t have finished the game, for sure, against Manchester City,” said Zola.

“Every group has its own personalities, good and bad ones. I don’t think anyone in the group, in this group, has enjoyed that day.

“But everyone reacts differently. I don’t want to get into it very much, but we all felt that defeat is burning.”

Chelsea recovered from the thrashing in the north-west by taking a 2-1 first-leg lead over Swedish club Malmo in the Europa League last 32 on Thursday.

However, manager Maurizio Sarri remains under pressure to save his job as he tries to rectify the club’s recent troubles, which also include a 4-0 loss at Bournemouth.

The FA Cup holders face a crucial period before the end of February, with Manchester United due at Stamford Bridge for a fifth-round tie on Monday.

Sarri’s side then play their second leg with Malmo, contest the Carabao Cup final with Manchester City and host top-four rivals Tottenham.

Zola thinks the Blues’ squad possesses sufficient leadership for the challenges ahead, but feels unity and team work could be more significant.

Asked if the current team contains strong characters similar to Marcel Desailly and ex-England captain Terry, Zola replied: “Yes, I believe so. They are different personalities, but characters… this group, like the one I had in my times, doesn’t like losing.

“Maybe they show it in another way. But it’s wrong to make comparisons like that.

“They reacted (against Malmo) and continue to react. It will be good if we can react more as a team rather than individuals.

“What we are building here is a philosophy of playing. It’s not enough for one person to get the ball and try and beat two or three players. That’s not the way we want to play.

“But if you ask me if this group doesn’t care, I don’t believe that. They care. But they need to understand about how to work together, react together, pressing together. That’s the way we win games.”