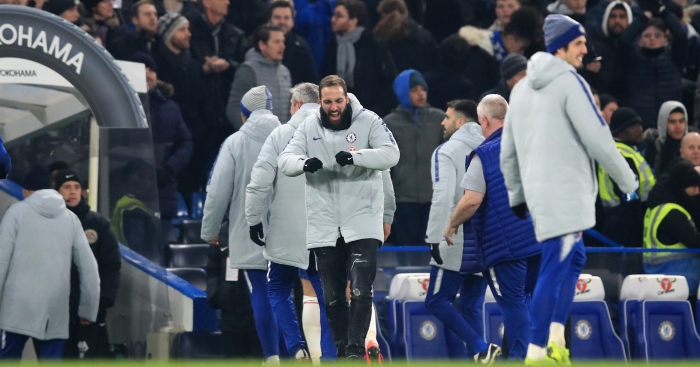 Gonzalo Higuain has been backed to be an immediate hit with Chelsea.

The 31-year-old Argentina striker has joined on a loan deal until the end of the season, with Chelsea holding options to extend his stay if it is a success.

Higuain, who could make his debut in Sunday’s FA Cup fourth-round tie with Sheffield Wednesday at Stamford Bridge, has played in Spain and Italy, enjoying the best season of his career under Chelsea boss Maurizio Sarri.

Higuain scored 36 goals in 35 Serie A games for Sarri’s Napoli in 2015-16 and Blues assistant boss Gianfranco Zola reckons the striker can deliver in English football.

“I’m sure there are big expectations. I’m also sure Gonzalo is used to it,” Zola said.

“He’s a player who can score in many ways so we hope that he can bring his qualities to this team – at this moment it is very much necessary.

“He’s coming late, but he’s coming in a team that plays a system he knows very well, so this is a big advantage.

“Here there are the type of players who will help him to do what he can do best. The conditions are good.”

Eden Hazard is also relishing the chance to play alongside Higuain.

“When you see his career he has done it everywhere, Madrid, Napoli and Juventus,” Hazard said.

“I think he can do the same here. He is a top scorer, he can score anywhere.”

Zola downplayed the criticism levelled by Sarri at his players following the lacklustre Premier League loss at Arsenal last Saturday, which garnered a positive reaction in Thursday’s Carabao Cup semi-final with Tottenham.

The Blues won on the night 2-1, earning a 2-2 aggregate draw, and progressed on penalties to the February 24 final with Manchester City.

“Sometimes the criticism is not necessarily a negative thing,” Zola added.

“We don’t question that these players can achieve peak performances, like they did yesterday.

“What we’re trying to achieve here is consistency in performances, because it’s the nature of the league.

“You can’t afford to play two games well and one game less good. The top teams are pushing.”

Hazard had been singled out by Sarri ahead of the Spurs contest, the Italian saying the 28-year-old was “not a leader” and apparently questioning his team ethic.

The Belgium captain shrugged off the criticism by performing well against Spurs, when restored to his favoured left-wing role from the ‘false nine’ position he has occupied of late.

“My target is just to play football. I don’t care what people think. I just want to do my best.

“Against Tottenham I did, against Arsenal I didn’t, of course. But now I look to the future and I will do my best again.”

Midfielder Ruben Loftus-Cheek could return from a back injury to face the Owls, but Victor Moses has completed an 18-month loan move to Fenerbahce and Alvaro Morata is nearing an exit, too. Atletico Madrid have been linked with the Spain striker.