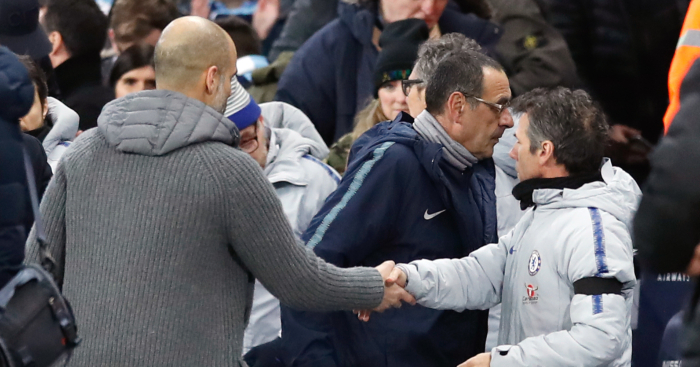 Gianfranco Zola has defended under-pressure Chelsea manager Maurizio Sarri by citing Pep Guardiola as an example of how it can take time for coaches to adapt to the Premier League.

Sarri’s footballing philosophy has come under increased scrutiny following three defeats from four league games which have left the Blues playing catch-up in the race for Champions League qualification.

The Spaniard, who guided City to the title in emphatic fashion last term, initially struggled to make his mark in England, finishing his first season trophy-less and 15 points adrift of Antonio Conte’s table-topping Chelsea side.

Ahead of Monday’s FA Cup fifth round tie with Manchester United, Blues assistant coach Zola says former Napoli coach Sarri is willing to modify his tactics but does not expect him to abandon his attacking, possession-based game-plan dubbed ‘Sarri-ball’.

“Two years ago, you were probably asking the same questions to Pep Guardiola,” said Zola.

“You were asking if he’d keep playing from the back all the time. He said this was not in discussion and part of my game, even in the difficult moment. Maybe he adapted.

“He has improved a lot in that, because he got his team defending better and pressing better, attacking better. He has adjusted something but not the way he saw football.

“There are questions about what we’re doing, a lot of doubts, but we are trying to adapt to the league.

“But we don’t change what we believe is good for this club because, otherwise, we are nothing.

“You admire what Pep has done. Certainly he’s a good inspiration. Not everything comes together straight away.”