Home Chelsea Zola: ‘Nobody is pleased…we have to be consistent’

Maurizio Sarri's assistant admits Chelsea are in "a crucial moment" and calls for unity to get them through it. 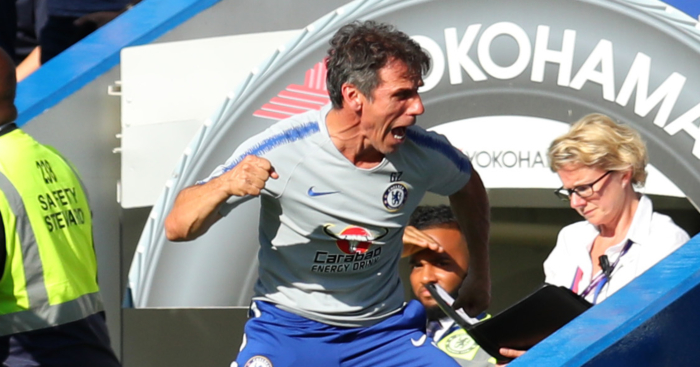 Gianfranco Zola says Chelsea must unite to rectify their stuttering season ahead of a crucial run of fixtures.

The FA Cup holders host Manchester United in the fifth round on Monday evening, before the second leg of their Europa League tie with Malmo and next Sunday’s Carabao Cup final against Manchester City.

Maurizio Sarri’s men then welcome London rivals Tottenham to Stamford Bridge hoping to boost their chances of Champions League qualification having dropped out of the Premier League top four after last weekend’s 6-0 thrashing by champions City.

The heavy defeat against Pep Guardiola’s side followed a 4-0 loss at Bournemouth in the club’s previous away game.

Asked if Chelsea’s players are demonstrating sufficient desire to turn things around, assistant coach Zola replied: “Of course. Nobody is pleased when you lose games the way we did recently. Not only the players, but the coaches and everyone.

“It’s a moment when we’ve been alternating the results, going from one good performance to a bad one. We don’t like.

“We have to be consistent. We all know this, and it’s important everyone understands the situation and is working on it: coaches, players and club.

“This is important. The unity facing the challenge will make the difference.”

Chelsea bounced back from their nightmare trip to the Etihad Stadium by securing a slender 2-1 aggregate lead in the first leg of their European tie with Malmo.

Sarri’s players were given the day off on Friday after arriving back in the UK in the early hours.

The Italian will hope the rest reaps the desired reward as he prepares for what could be a season-defining period, starting with Ole Gunnar Solskjaer’s reinvigorated United team in a repeat of last season’s FA Cup final.

“We know it’s a crucial moment. We have some very important matches,” added Zola.

“It’s an important moment, very challenging. The key will be to face each task only thinking about that particular task.

“The first will be United, and we come into this game after a good performance in the Europa League. That’s the most important thing. Then we’ll think about City and Tottenham.”