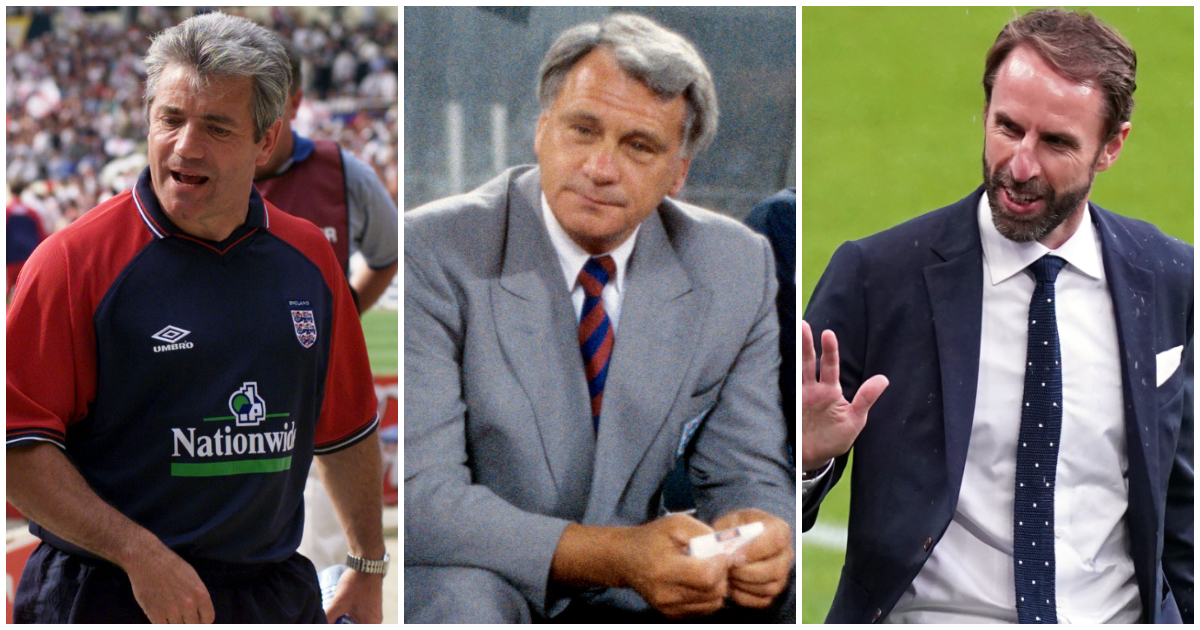 England have yet to match Sir Alf Ramsey’s best, despite Sir Bobby Robson pushing him close. Could it happen on Monday?

England looked good to better Gareth Southgate’s best at half-time on Friday night, and they might yet before the international break is over. Since Sir Alf Ramsey, here’s every manager’s biggest win as Three Lions boss…

Sir Alf Ramsey
USA 0-10 England
Wednesday, May 27, 1964
Fred Pickering marked his first England appearance by scoring the second, fourth and 10th goals in a debut hat-trick. Roger Hunt went one better by scoring four, while Terry Paine bagged a brace and Sir Robert of Charlton helped himself to a goal too in front of just 5,000 at Downing Stadium in NYC.

Revie’s England hit five without reply on two occasions at Wembley. First against Cyprus in a Euro ’76 qualifier when Malcolm Macdonald bagged all five, then again two years later when Mick Channon scored a brace in a World Cup qualifier.

England hit three fours for Greenwood, twice against Northern Ireland. In a Euro ’80 qualifier, Bob Latchford scored a couple, while Bryan Robson opened the scoring after 47 seconds in a Home International three years later. Against Norway, it was Terry McDermott’s turn to score a brace.

Robson’s England hit Turkey for eight on two occasions but the Luxembourg shipped nine in a Euro ’84 qualifier. Luther Blissett netted a hat-trick on a windy night at Wembley but the best goal came courtesy of Glenn Hoddle…

England saved the best for last under Taylor, smashing seven past San Marino after initially going behind in 8.3 seconds when Stuart Pearce sold David Seaman short with a backpass. Ian Wright remains the last player to score four in a game for the Three Lions but it wasn’t enough. England had to win by seven – they didn’t – and hope Poland did them a favour. They didn’t, so Taylor was toast.

England won ‘The Diana Match’ which took place at Wembley 10 days after the death of Princess Diana. But according to Ian Darke, the Moldova defending for the fourth goal in the 90th minute was ‘a real tragedy’. That was Wright’s second in addition to a goal each for Pauls Scholes and Gascoigne. Some midfield pairing, that.

Alan Shearer scored a 22-minute hat-trick before half-time with England leading 5-0 at the break on Kieron Dyer’s debut. Steve McManaman bagged a first-half brace, with Michael Owen adding a sixth in the dying seconds – his first Wembley goal.

100 – England's best 100% win ratio against an opposing nation is against Luxembourg, against whom they have won all of their nine matches, most recently a 6-0 win in September 1999. Cloud. pic.twitter.com/J89Nk2EqPh

Wayne Rooney and Darius Vassell scored a couple each at the Etihad in England’s final warm-up game before Euro 2004, with Wayne Bridge and Frank Lampard grabbing the others. Rooney’s 25-year-yard half-volley was the undoubted highlight…

Peter Crouch and Jermain Defoe scored a couple each at Old Trafford, with Steven Gerrard grabbing the second and best goal in a Euro 2008 qualifier that was as good as it got for McClaren…

Andorra were back in England three years later and conceded a shed-load more scabby goals, with Defoe and Rooney getting a couple each at Wembley.

Under Hodgson, England record their biggest win since 1987 against the world’s lowest ranked side. Defoe scored a couple after an early own goal got England going. Alex Oxlade-Chamberlain, Ashley Young, Lampard, Rooney and Daniel Sturridge also bagged.

Adam Lallana’s 95th-minute winner spared England’s blushes against the 10-man hosts getting Big Sam’s reign off to a winning start. And finish…

England celebrated their 1000th game by securing qualification for Euro 2020 at Wembley. Harry Kane scored a first-half hat-trick with the Three Lions 5-0 up at half-time (sounds familiar) while Oxlade-Chamberlain, Marcus Rashford and Tammy Abraham adding to an own-goal.