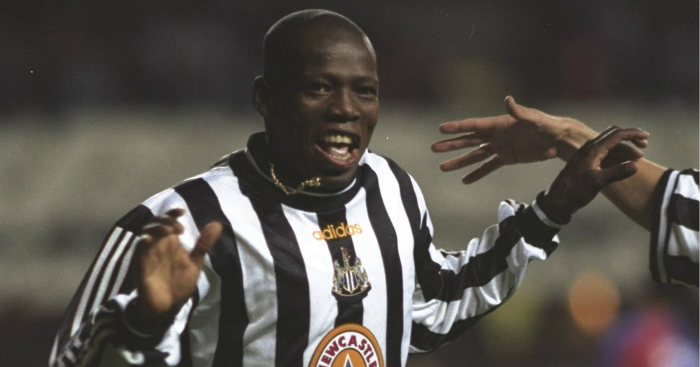 The first of our guest articles by Mailbox regulars. Enjoy…

If the phrase ‘Things that cost Newcastle the title in 1996’ was the subject of a round on Pointless, Tino would, I reckon, score in the mid-thirties (Keegan losing the plot would be highest scorer; that’s for another day). Those thirty-odd people who gave that answer would be wrong.

Newcastle were (mumble) points ahead at the time Tino signed. FACT.

Man United won the League, with Eric Cantona scoring 88th-minute goals in 43 consecutive 1-0 wins after returning from his ban. FACT.

But there is little causality from Tino’s arrival and the downturn of Newcastle’s fortunes. They happened at around the same time, but one did not cause the other. The signings of Tino, and David Batty, were supposed to be those that galvanised the squad to maintain the lead until May. The lead didn’t hold – lazy journalists (and I am not saying all us journalists are lazy (because I am one now, right?)) looked for reasons and blamed the signings and their apparent ‘unbalancing’ of a previously unstoppable side. They decided it must have been the new guys – a nice, simple theory. They kept repeating it, fans swallowed it, it became the accepted truth. Lordy, what a complicated paragraph.

The transfer from Parma to Newcastle was a drawn-out affair. Readers may recall him turning up at SJP wearing a huge grey fur coat, huddled up against the cold of a Newcastle February, and the falling snow. He didn’t sign that day; he headed back to Parma, the tease. But he came back.

He was well-known to watchers of Football Italia – his languid, apparently-lazy-and-slow-but-deceptively-quick style standing out even in a very talented Parma side. His somersault-then-double-fist-pump celebration stuck in the mind too. We were excited.

His debut was off the bench at Boro.

His first touches included a perfect Cruyff turn and then cross for an equaliser, before Sir Les fluked a winner. Five minutes later he did a reverse drag-back megs on the touchline. Match of the Day drooled. Welcome, Tino.

He scored his first goal at Maine Road a fortnight later in a 3-3 thriller – elbowing Keith Curle during the match, headbutting him just as it finished. Match of the Day condemned. (His punishment? A one-match ban and a £10k fine, not dished out until after the season ended, weirdly. More innocent times…)

The real reason for The Slump was as follows. There was an unbalancing of the side, but the cause two-fold, and Tino is neither of those folds. First, an ankle injury to Keith Gillespie between Christmas and New Year (he was out for a month, but  was never really right again that season).  Then Ginola seemed to lose the plot and his motivation after a travesty-of-justice red card at Highbury on the 6th January. He lashed out at Lee Dixon in the second half, after a first half when Dixon and Nigel Winterburn should both have been sent off themselves for repeated fouls on the Frenchman. Their service from the wings (22 assists, seven goals between them up to the New Year) dried up almost completely (three goals and three assists between them after that). Sir Les, reliant on their service, scored 19 goals and then seven goals in the same two spells.

Our second-placed finish that season meant we entered the UEFA Cup, where Tino was, somehow, more Tino than in boring, run-of-the-mill English football (nine goals in 11 UEFA Cup/Champions’ League games).

After scoring at home to FC Metz (featuring future Man City-insulter Robert Pires), Tino, a yellow card away from a suspension, not content with risking a booking for taking his shirt off, took his shirt off, ripped out the corner flag and used it to wave his shirt high, high in the air, to make the booking a certainty.

An injury crisis meant we had to play away at Monaco in the next round with Robert Lee up front on his own. It was 3-0. Ah, Tino.

All that, and I haven’t even mentioned his hat-trick, in our first ever Champions League match, against Barcelona. Imagine that. Two soaring headers, and a penalty that he won himself.

He is, without doubt, a legend in Newcastle. He was with us for under two years, was brilliant only sporadically (very sporadically indeed in domestic competition, scoring 9 in 48) won nothing (obviously), so how did he achieve such status? It is not just down to Newcastle fans having low expectations. Well, not just that. He is loved almost as much as is Peter Beardsley, and that is high praise indeed.

Alex Stokoe (not a moron, or illiterate)