Home All The News A Football365 love letter to… Martin Tyler 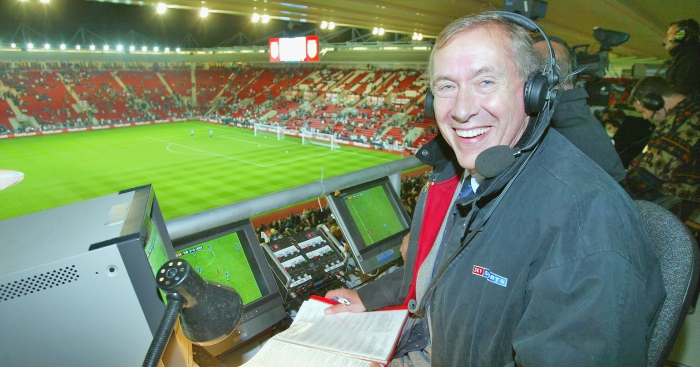 Johnny’s letter this week is to a long-serving TV commentator… and it’s live! That’ll be Martin Tyler, then.

Why the love?
Since December 1974, Martin has been commentating on commercial television, starting with a game between Southampton and Sheffield Wednesday. He is the longest-serving commentator that still works every week. In fact, he remains Sky’s primo mic man and the chap who gets all of the big and important games. He has covered every World Cup since 1974. In the ’80s, he was a number two to Brian Moore on ITV, but he bided his time and when BSB came calling when the Premier League was formed, he got his break into the lush upland pastures of the commentary high ground.

His longevity can be put down to his ability to do the job without too much ostentation or fuss, but also being able to respond with appropriate excitement when needed. For 20 years he was a familiar voice but we had little or no idea what he looked like until Sky started that shot of the commentary team pre-game.

A fellow commentator told me the following:

“He’s an absolute gentleman, has come up with some of the best commentary lines ever. Must be remembered that he took a gamble leaving ITV to go to the then BSB with their squariels . Football is his life.”

Superhero skills
Martin has always done all the basics in a solid, dependable fashion. Reading that back, it sounds like a euphemism for being dull, but it really isn’t. Martin has never been one of those commentators to try and make his mark with a host of trademark riffs and quirks. He just shouts very loudly when dramatic things happen, the way we all do at moments of football drama. This is surely rooted in his love of the game. There is certainly nothing fake or contrived about it and having something to say at a crucial moment is a real art.

I remember him in the ’70s when we on Teesside would get highlights on Sunday from Yorkshire or Granada television. Incidentally, when ITV was regional and each region had their own identity and own commentators, football broadcasting was wonderfully diverse and textured. I wish we could go back to that.

Anyway, Martin was initially on Southern, then Yorkshire before settling in his native northwest on Granada (he was born in Chester) from the mid-70s onwards.

I like the look he gives to camera when they go to the commentary, just before the game starts. It always expresses delight, joy and enthusiasm.

He can pronounce the names correctly and identify the players instantly – both important but oft overlooked talents. He manages, even at 72, to retain a boyish excitement at a fixture. This shouldn’t be underestimated as a quality because it must be easy to lapse into dull cynicism and wash each game down with a pint of whine. I also think the fact he still does coaching himself at Hampton & Richmond Borough helps keep him connected to how the game develops tactically.

Has done very well not to be tainted by the indelible, sulphurous stain that sitting next to Andy Gray for 17 years could easily have left. Their partnership defined Sky’s football for that whole period, so when That Thing Happened, he managed to not suffer from the toxic fall-out.

The co-comm relationship he has with Alan Smith has all the quality of familiarity he had with Gray but with added articulation, decency and civility.

I’ve not been able to find any comment that he has made about the dismissal of Gray and Richard Keys. And that in itself is quite an achievement and suggests he knows enough about the modern world to know when to keep your mouth shut. But I have to say, being in tandem with the likes of Alan Smith has only made him better.

Style guru?
Although he’s 72 he’s reached that point in life where he seems virtually ageless. Looks the sort to buy a nice coat in John Lewis and has almost certainly received many pastel-coloured cashmere scarves for Christmas and birthdays.

The best thing about being an older dude is that you don’t give a flying feck about clothes. You’ve long since abandoned any such shallow concerns and can get on with being ether warm or cool, as the weather demands.

What the people say
There are very few transgenerational commentators, so inevitably Martin is a kind of household companion to everyone aged 18 to 80 about whom many people have fond memories. I think long-serving broadcasters enjoy a unique position and status in our lives as surrogate friends who, week-in-week-out, are just there. They provide bookmarks in the story of our life. They’re part of the structure of our routines and as such are often a comforting presence: a hot water bottle in the cold bed of life.

‘Huge appetite for and knowledge of the game at all levels. Used to love seeing him sporting his Woking FC tie pre-match on a Super Sunday.’

‘”AgueEERRRRRRRRROOOOOOOO!!! I swear, you will never see anything like this ever again!”‘

‘Perfect capturing of the big moment sums him up.’

‘The voice of football.’

‘Part of the football furniture. Made me feel very uneasy when I heard he’s 72 years old. Can’t imagine football without him.’

‘I like the way that everyone thinks he’s against their club. Shows he’s doing his job well.’

‘His early days were with Southern TV. I think he still dreads visits to Fratton Park for the long climb up to the top South Stand gantry.’

‘One of three amazing football men I’ve interviewed without having to ask a single question. He just talked. Great pro; hasn’t aged.

‘Who could forget the ‘AGUEROOOOO,’ screamed at fever pitch. Up there with Moore’s “up for grabs now”.’

‘Iconic voice, second only to Motson.’

‘”And it’s live!” Still builds up the excitement in anticipation of an afternoon of football.’

‘Not only the voice of Sky, but the voice of football from the FIFA games as well! Everyone recognises his voice, a commentating legend.’

‘Always get a sense of occasion when he is on comms. It’s as if it must be a big game if Tyler is on.’

‘Although I’ve grown weary of the Premier League, it’s still great to hear “AND IT’S LIVE” before a big game. The voice of the PL.’

‘He speaks in real sentences. He knows the game inside out. The best by far.’

‘He *is* Sky Sport’s football coverage.’

‘He makes dullest games interesting. Told the world about the “twenty to five ball” as Burnley played out time v Newcastle.’

‘Living in HK, I have a Tuesday morning routine involving two mid-ranking PL teams, some top coffee and Martin Tyler.’

‘Never understand criticism of him. Best TV commentator by a mile. Has never aged badly and speaks a lot of sense.’

‘Someone needs to write a short thesis on his octave levels after Liverpool screamers vs average goals scored by the opposition.’

‘A five-minute commentary spell when Sunderland scored twice to lead at Man City on the last day in ’91 captured the frenzied atmosphere perfectly. There were 15,000 Sunderland fans at Maine Road that day and even though we lost and went down I still watch those few minutes regularly. His commentary and the memories of that day still make the hairs on the back of my neck stand up.’

‘Kanu’s 3rd against Chelsea from the impossible angle: ‘What’s he gonna do?? OOOOOHH KAN-U BELIEVE IT?!?!?!’ Even found time to get a pun in.’

‘Early days of Sky, when going to the pub to watch a game was an event, he was that voice of football that made it comfy, familiar and an event.’

‘Find the bias accusations towards United or any other big club odd based on how he was genuinely responded to a great/big goal.’

‘As an Arsenal fan, the night we beat Leeds at Highbury and Henry scored four, you could hear how excited he was to be witnessing it.’

‘For Australians around my age (34), he was our introduction to English football on TV. Couldn’t really have asked for anyone classier.’

‘Having met him once and interviewed him several times, he is absolutely one of the nicest people in football. Always generous with his time.’

‘Screams a three-syllable name better than anyone.’

‘Loads of people probably mentioned this, but the man is an utter GENIUS when it comes to excited inflection. He ALWAYS hits the right note!’

‘He sounds so relaxed and at ease with his own voice, other comms can sound strained and eager to be the star, but not Martin Tyler.’

‘Says ‘And Its LIVE’ with same amount of gusto be it Man Utd v Liverpool or Stoke v West Brom. I’d be like “Meh, yeah it’s live I guess”.’

‘Not just an iconic voice and wonderful commentator, spent years sat next to Andy Gray without once snapping. Buddha-like Zen.’

‘It feels like he’s chatting to me exclusively, what more could you want?’

Future days
He shows no sign of losing sharpness or energy despite his age, and is setting new standards for the experienced broadcaster. Still seems as enthusiastic as ever, so it seems safe to say he’ll be Sky’s main man for years to come yet. I leave you with some words from another colleague down the years.

“Nothing about Martin is fake. I’m sure he looks forward to every single match he works on. He’s got that level of enthusiasm which means he always thinks it’s going to be a good game, even though the rest of us might think otherwise. It can be Burnley v Stoke or a World Cup final and he always seem filled with the same amount of excitement because hey, it’s all football and he just loves football. That’s why he’s had such a long career. He never gets bored even by boring football and I hope he keeps on working for as long as he wants to because we’ll all miss him when he’s not on the air any more.”

And here is a lovely compilation of his finest moments to set you up for the weekend of football.